Spiders “hear” each other and their environments through hairs on their bodies and through crack-shaped slits on their legs. These... 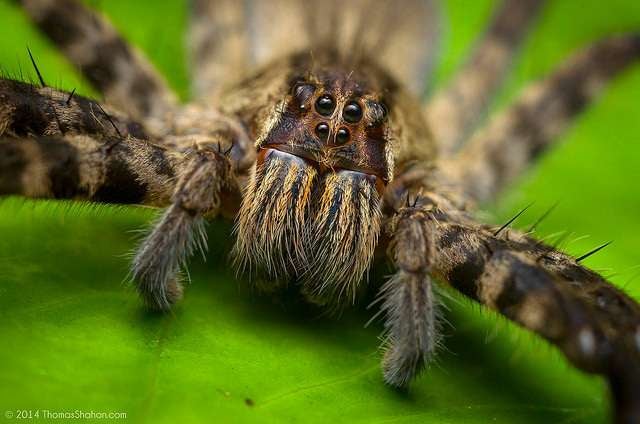 Spiders “hear” each other and their environments through hairs on their bodies and through crack-shaped slits on their legs. These hairs and slit organs pick up tiny vibrations in the air, which help them detect movement — helping them find prey or a potential mate, for example.

The special slit organs, in some cases called lyriform organs, have parallel slits that look like the strings of a lyre or another stringed instrument. They move and deform in response to minute external forces. Daeshik Kang and Mansoo Choi of Seoul National University and their colleagues wondered if they could mimic that response to build a flexible, tiny and very sensitive sound detector. Their findings are published today in Nature.

Teams of scientists are continually coming up with new miniaturized electronics, which would conceivably help people track their health, monitor infrastructure, and do a whole host of other things. But it’s been hard to come up with something that is at once durable, flexible, and highly sensitive to vibration.

Kang and colleagues built a thin platinum film with cracks embedded in it, layered on top of a soft polymer substrate. The slits were designed to mimic the lyriform slit organ of a spider leg. As in spiders, the platinum cracks deform and stretch in the presence of a mechanical strain — like the vibrations caused by sound waves. The device is connected to an electrical current, which only flows through the platinum.

To test it as a sound detector, the researchers first attached their platinum sensor to a violin, just above the f-hole on the instrument’s right side. Those holes are what allow vibrating air to emerge from the instrument and make a lovely sound.

A violinist played a selection from Elgar’s “Salut d’Amour,” and the tiny spider sensor vibrated in concert. Its movements were translated into digital signals, and the researchers made a spectrogram, which you can see in the video. The sensor correctly recorded the harmonic frequency of each note in the piece.

Since that worked so well, the team next turned to human speech. They stuck the sensor on the necks of 10 human volunteers, and asked them to say the words “go,” “jump,” “shoot” and “stop” — commands in a video game — more than 10 times into a microphone. Then they compared the microphone’s recording to the spidey sensor’s recording. When the researchers played background noise at the same time, the microphone’s spectrogram signals got really noisy, but the crack sensor remained accurate.

This mimics a phenomenon known as the “cocktail party effect,” in which our brains are able to filter out unnecessary background noise and focus on a single source — something microphones typically can’t do. Finally, the researchers attached their spider sensor to volunteers’ wrists to monitor heart rates.

They also tried these experiments with a gold-plated sensor, but it didn’t work as well; platinum has some specific crack behaviors at the smallest scales that make it more effective. With some tweaks, the platinum-based one could become even more accurate, the authors say.

How do spiders use their own organs? The wandering spider, Cupiennius salei, scratches leaves with its mouth and abdomen, explains engineer Peter Fratzl in a perspective piece that publishes today along with Choi and Kang’s paper. A potential mate can sense these movements using its lyriform organ.

As Fratzl points out, the spider-inspired sensor gives an impressive performance — but it’s still a long way from the real thing.

“We are still far away from an artificial sensory system with a performance similar to that of the spider organ, whose evolution going back to the origins of the Chelicerata group of arthropods has been 1,000 times longer than the existence of humans,” he writes.