Sharks Glow, But Only For Each Other 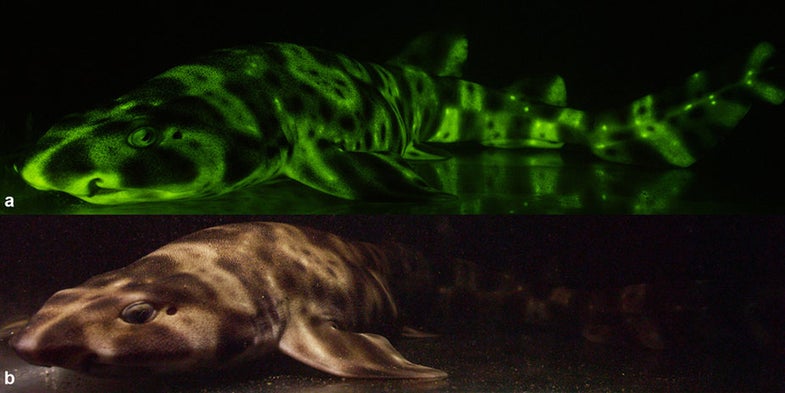 There are lots of species that glow in the dark, especially underwater. These species are genetically diverse, ranging from krill to squid, from sea snails to sharks, which makes researchers think that biofluorescence evolved many times independently. But just what role it plays, or why biofluorescence works to an organism’s advantage, is still a mystery. Now, to better understand how biofluorescence affects how two types of small, deep-dwelling sharks see each other, a team of researchers has created a camera that allows them to see the world as the sharks do, according to a study published today in the journal Scientific Reports.

Biofluorescent animals like sharks or turtles don’t produce their own light; instead, special molecules on their skin absorb surrounding light and reflect it back with a shifted wavelength so that it appears slightly different. But that all looks very different underwater, especially deep down where these live, since the ocean is a “huge blue filter,” David Gruber, a marine biologist at Baruch College and one of the authors of the paper, told The Atlantic.

Armed with the camera, the researchers dove out into Scripps Bay, off the coast of San Diego, to see how catsharks glow in their natural habitat. Under normal lighting conditions, the researchers could barely see the sharks against the canyon wall. But with the “shark-eye” camera, the sharks’ skin was covered with a glowing green pattern, which differed depending on their species and their sex. The luminescence starts to appear at about 125 feet depth. The researchers suspect that the sharks’ biofluorescent quality makes it easier for them to spot each other in low light, which would help them find mates, while still evading predators that might not be able to see as well at that depth.

It’s like being at a disco party with only blue light, Gruber told National Geographic–some things look darker or lighter bathed in blue. “Suddenly, someone jumps onto the dance floor with an outfit covered in patterned fluorescent paint that converts blue light into green. They would stand out like a sore thumb. That’s what these sharks are doing.”

This isn’t the first time researchers have used visualization techniques to mimic how another organism sees the world. But this one might reveal something important about the role of biofluoresence. Based on how many times biofluorescence has evolved independently, the researchers suspect there’s more to learn about its role in animal behavior and evolution. Plus, there are probably more biofluorescent organisms out there to discover.