At The Explorers Club Annual Dinner, Invasive Species Are On The Menu 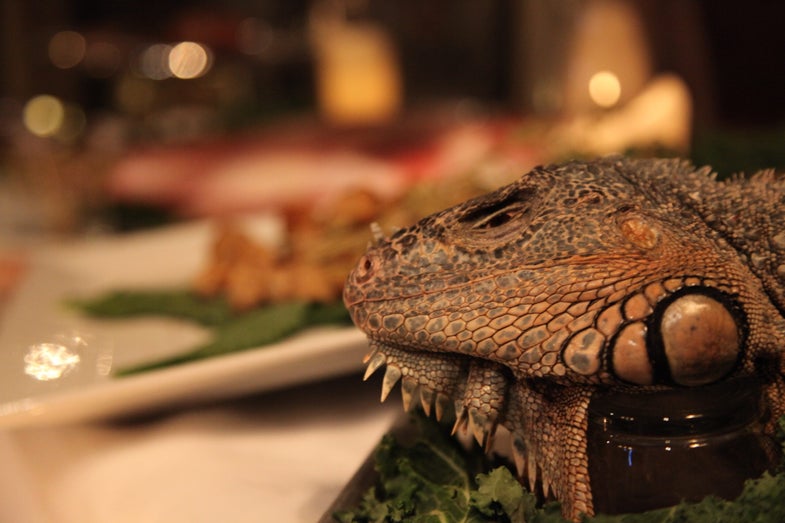 Invasive species are on the menu for the Explorers Club Annual Dinner. Green iguanas, originally from the neotropics, are overwhelming Puerto Rico and Southern Florida.
SHARE

As I stepped through the arched Victorian doorway of the Explorers Club on East 70th Street in Manhattan, I found it hard not to notice the feeling of grandeur wash over me. The creaking floors and flickering candlelight; the books, and artifacts adorning the walls; all create an atmosphere that the world and time itself are housed within the brick building’s interior. When you cross the stone threshold into the famed building, you quickly realize you’re no longer in New York anymore, but stepping through the ages.

On this particular occasion, the Explorers Club was preparing for their annual dinner, a highly dignified black tie event famous for serving up exciting exotic dishes (although, that depends on how you define “exotic”—tarantulas might be exotic to your average American, but not to someone in South Asia or other tropical parts of the world where they are eaten with greater regularity). So I was there to sample some. And on the menu this year? Invasive species.

In the past, these “exotic” foods were often various kinds of animals, now endangered, that were hunted from the wild in some far off place. But nowadays, the Club—ever forward thinking and pushing boundaries—is more forward thinking and conservation oriented in its mindset. And its dinners the last number of years have tried to reflect that.

This year’s dinner, to be held on Saturday, March 12, will have an oceans theme in an effort to highlight how little of the world’s seas we have explored and yet also how in danger those seas are from climate change and overexploitation. As such, the dishes served will be invasive species that have ravaged aquatic and coastal ecosystems throughout the United States. 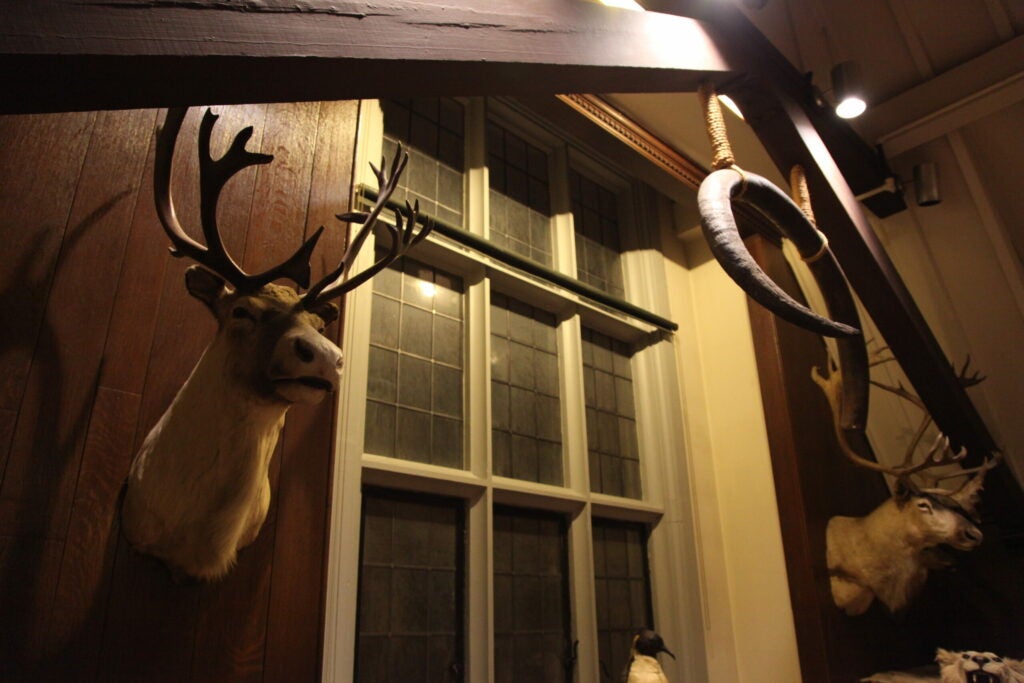 Gone are the club’s old days where big game were routinely brought back from expeditions. With its conservation focus, the club no longer collects animal trophies. A number of the animals in the trophy room were collected by Teddy Roosevelt himself. The large brown tusk hanging from the ceiling is a mammoth tusk.

Standing before guests and journalists invited to taste this year’s dishes before the main event, Ted Janulis, the newly minted President of the Explorers Club, remarked that “We have this theme of exotics over the years, but it has really morphed into something special because now, we’re talking about invasive species; how you can consume invasive species as a way to stabilize and make the planet more sustainable.”

Meandering over to the buffet, I looked down at a spread of foods you won’t find on your grandmother’s table. Lionfish fillets, Asian carp sashimi and iguana meatballs on sticks neatly adorned plates laid out in between full size examples of their namesakes. An iguana twisted its long fingers and tail amongst the dishware; a massive bug-eyed Asian carp lay heavily in a bed of greens; a spiny lionfish gaped at the ceiling.

I grabbed an iguana ball and munched away. It was cold, which I suppose could bother some people, but it was chewy with a texture—as ridiculous as it sounds—like chicken and that suited me just fine. I had another. 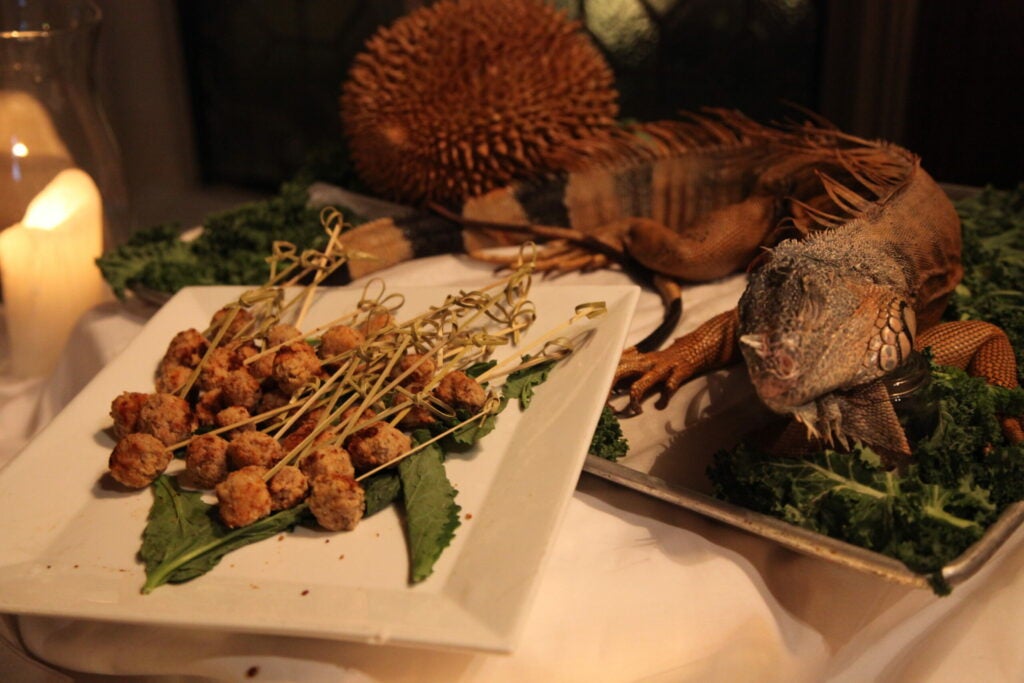 The little iguana balls were delicious. Believe it or not, that tasted kind of like chicken.

Gesturing in a dimly lit room with the refreshing early spring air drifting in from the patio outside, Gene Rurka, exotic foods expert who runs the—you guessed it—exotic foods portion of the annual dinner and has been a member of the club for 25 years, explained why he’s included green iguana, which is native to Central and South America, for the hors d’oeuvres on Saturday.

“They’re devastating Puerto Rico. In Florida, they’re knocking the hell out of agriculture.” And with mild winters becoming more common, Rurka says they could reach as far as Washington, D.C. I imagined having to flush cranky iguanas out of my basement and took another meatball.

I moved onto the Asian carp, the notorious invader that has taken over the Mississippi River and its tributaries. These fish (the term ‘asian carp’ refers to a number of carp species) eat up to 20 percent of their body weight a day in plankton, can reach 100 pounds in size, and are wreaking havoc on freshwater ecosystems in the Midwestern United States.

As sashimi it was, admittedly, a tad hard to swallow. Not for lack of taste, but more because raw fish has always been a bit hard for me to stomach. With no other added flavor to hide it, you get the full fishy quality with no restraints. When delicately laid on white rice as sushi, however, it was quite good. 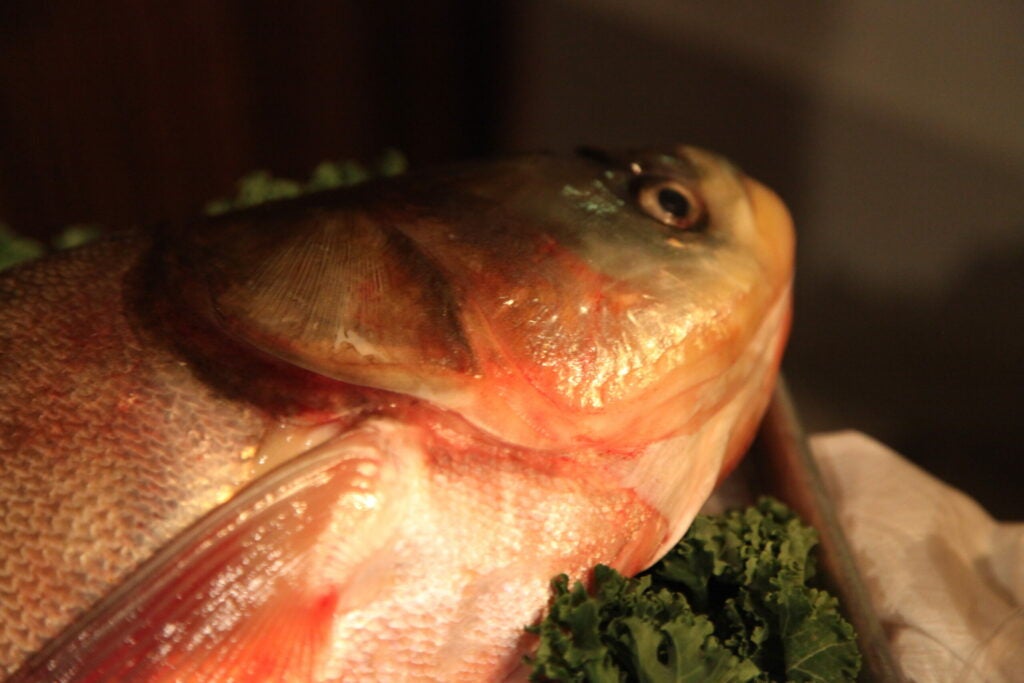 Asian carp was served as sushi and sashimi. They are wreaking havoc on freshwater ecosystems in the Midwestern United States.

“We need to create a market for invasives in order to relieve pressure on other species” said Rurka as I took a bite of carp sushi. He noted that we are very concerned with our favorite species of fish whose stocks are ever failing like cod and haddock, which is good, but with invasives like Asian carp, we have a plentiful source to be harvested that also happens to need to be removed from our midwestern environments.

“There’s so much of them, but unfortunately they’re not cheap. You would say ‘you’ll get them for nothing,’ but you don’t because nobody wants to fish for them.” he says. Salmon, for example is high in demand, and as a result is very cheap. “We need to make these [carp] marketable.”

Last on the table was lionfish. The striped, spiny fish long a staple of home aquariums has taken over the Eastern seaboard. Originally from the Indian and Pacific Oceans, these voracious predators consume scores of fish and crustaceans a day, upending coastal ecosystems. As a filet, on the other hand, they are very good. They flake apart like whitefish and as such, I could easily picture this breaded on a sandwich with the works. I finished off tasting with another iguana ball. 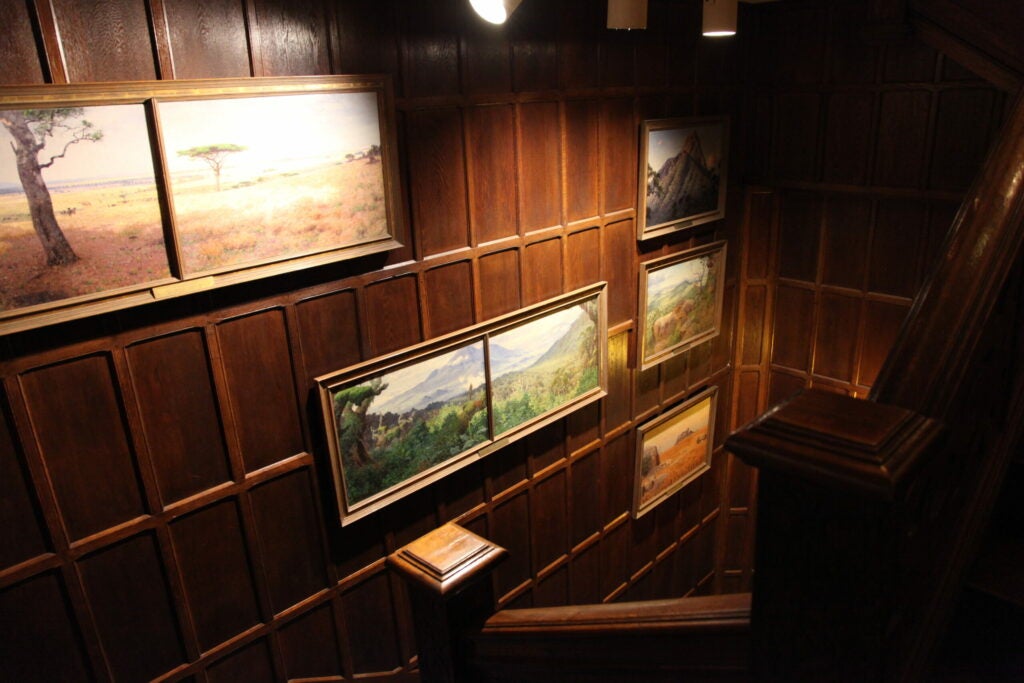 William Robinson Leigh painted these landscapes, which would later serve as the basis for many of the dioramas in the American Museum of Natural History.

After sampling the invasives, I spent some time with Gaelin Rosenwaks, marine scientist and filmmaker who helped organize this year’s dinner and who serves on the Club’s Conservation Committee. “To bring the conservation element into it was very important,” she said. “You know we all talk about exploration. Exploration is great, but with the way the world is, we really have to think about how we can help the planet by what we’re learning and discovering.”

Rosenwaks represents a very noticeable push into the world of conservation for the Club. Though that has always been a part of the club to a degree, it seems to be taking a much more front and center role as of late. Largely because of members like Rosenwaks, who was first inducted into the non profit organization when she was 22.

For a club whose members have been first to the North Pole, first to the South Pole, first to the summit of Mt. Everest, first to the deepest part of the ocean and first to the moon, they don’t have any reason to do anything differently. Yet again, that’s not really the way of explorers or pathfinders to begin with. “We’ve done a lot of damage” reflected Rurka during a lull in our conversation, “we’re not the greatest things walking.”

But as with all explorers, he expressed a hopeful energy with regards to the future. And not surprisingly, in his case, it focused on food. “All our problems come from food” he said. But that means it’s solvable. That just requires us all to become explorers. “You can explore the palette. If you really want to do some stuff in exploration, think food.”

I did a little bit of exploring before I left by grabbing another iguana ball. 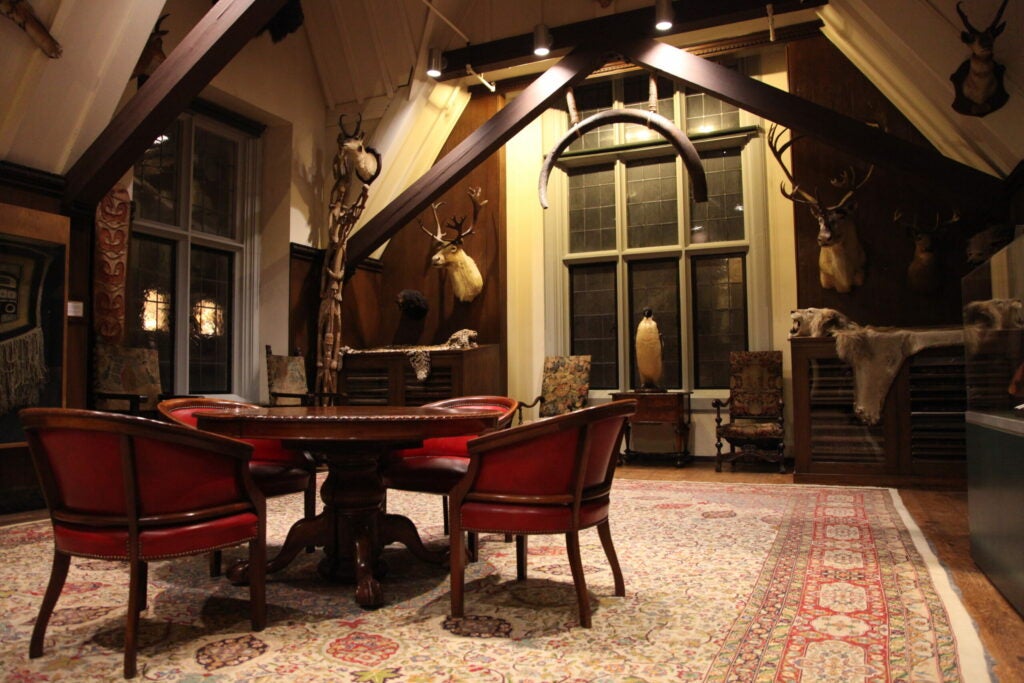 The trophy room at The Explorers Club showcases some of the Club’s past achievements.
Animals
Conservation
food
invasive species