Scientists are puzzling out how butterflies assemble their brightly colored scales 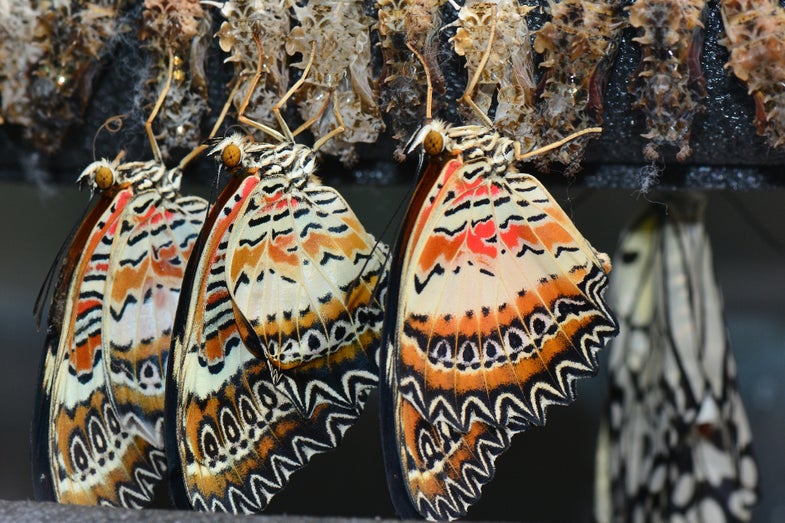 From the danger-sign orange of Monarch butterflies, to the regal blues of the Blue Morpho, butterflies come in a veritable rainbow of colors.

The insects display those incredible hues thanks to scales on their wings. Those scales are made up of crystals, which are made up of a sugar molecule called chitin (the same stuff that makes up insect exoskeletons and mushrooms). The tiny crystals on butterflies’ scales are called gyroids. They’re of interest to biologists, but also to materials scientists. Butterflies’ gyroids are for more tiny and precise than anything made by humans today.

A new paper in Science Advances explores how those crystals develop on a butterfly wing while it’s metamorphosing from a caterpillar into its beautiful final form.

Researchers can’t yet put a camera inside a cocoon to watch the process in real time—though there are labs that are working on exactly that problem. For one thing, as great as cameras are now, they aren’t small enough or sensitive enough to watch things like scales forming in real time, and the wet interior of cocoons isn’t great for sensitive electronics.

“Butterfly pupation normally lasts about 2 weeks,” lead study author Bodo Wilts says in an e-mail. “The scales grow in about 2-3 days from a first identifiable shape to the full scale, depending on the species of butterfly and the conditions of rearing.”

Instead of trying to watch the scales and gyroids develop in real time, Wilts and colleagues looked at the mature scales of the small Hairstreak butterfly Thecla opisena from Mexico under a very strong microscope, letting them see details of the wing’s structure even more closely.

“I was thrilled when I saw the butterfly for the first time under the light microscope,” Wilts says. “I expected to find the ‘usual’ pattern of green scales observed in many butterflies, but rather found that each wing scale carried structured nano crystals that were surprisingly not interconnected.”

In this butterfly, the gyroids were arranged in lines from small to large along a single scale, giving the scale its iconic shine and pigment, and also giving researchers a glimpse at how they might have formed. They say that instead of growing in a pre-set template within the cocoon, the shape of the structures seems to grow dynamically over time.

This study only looked at one of the over 140,000 species of butterfly, but there is a good chance that this could tell the researchers more about how others form their distinctive wing patterns.

“We anticipate that the growing mechanism developed here is applicable to other butterflies with a similar scale pattern,” Wilts says. “However, I am convinced that it is even more generalizable to most wing scales. Even though the diversity of nanostructure among butterflies is huge, all scales share the same basic growing mechanisms.”

Wilts is currently working on another study that looks at multiple species. The nanostructures could also tell researchers more about other organisms and structures, like mitochondria in cells, which have similarly complex patterns.

“The presented research can only indirectly hint at mechanisms on the cellular level, however, I anticipate that future work will be inspired,” Wilts says. “Learning and unravelling the principles behind these complex folding patterns on the molecular level will be very important.”