We've got some work to do 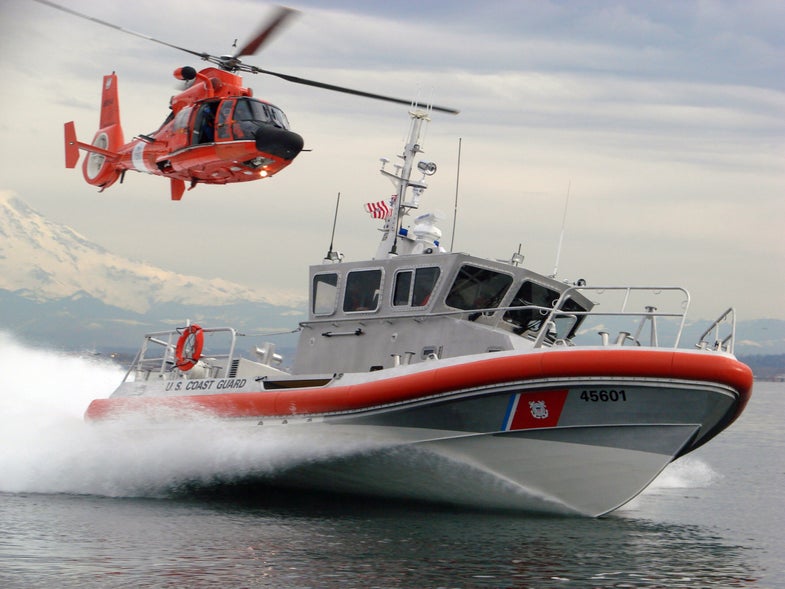 Tacoma, Wash. (March 3, 2006) The Response Boat-Medium (RB-M) is an all-aluminum, 45-foot boat with twin diesel engines with water jet propulsion launched at in Commencement Bay in Tacoma, Wash. This small boat, which recently completed a successful Builder's Trials on March 3, is expected to be the primary non-heavy weather, multi-mission capable boat for the U.S. Coast Guard. The RB-M will have increased maneuverability and be capable of speeds in excess of 40 knots (46 miles per hour). A full cabin will provide crew protection from the elements and will be equipped with a robust navigation system, heating and air conditioning, shock mitigating seats, and a communication system capable of communicating with other federal, state and local Homeland Security organizations. The RB-Ms misssions will include Search and Rescue (SAR), Enforcement of Laws and Treaties (ELT), Ports, Waterways, and Coastal Security (PWCS), Defense Operations (DO), Marine Environmental Protection (MEP), and Recreational Boating Safety (RBS). These boats will replace the 41-foot Utility Boats (UTB) which have been the workhorse of the coastal stations for the past 25+ years. U.S. Coast Guard photo by Jeff Curtis. LT Mark Piber
SHARE

Today, President Obama addressed the graduating class of the Coast Guard academy in a speech that mentioned the phrase ‘climate change’ 26 times.

It might seem strange like a strange topic to talk about at a military event, but the military is making a concerted effort to go green, especially as global warming and climate shifts begin to impact diplomacy (or the lack thereof) around the world. Melting ice in the Arctic is creating a mad scramble for resources, while melting in the Antarctic is raising sea levels so high countries are drowning. And drought is making water an increasingly precious resource, one that people could die for. With all that, it makes sense that the Commander in Chief considers climate change a serious threat.

Here are some highlights from the speech, which you can read in its entirety here:

A New Ocean Is Opening

“As Admiral Zukunft already mentioned, climate change means Arctic sea ice is vanishing faster than ever. By the middle of this century, Arctic summers could be essentially ice free. We’re witnessing the birth of a new ocean — new sea lanes, more shipping, more exploration, more competition for the vast natural resources below.”

“Already, today, in Miami and Charleston, streets now flood at high tide. Along our coasts, thousands of miles of highways and roads, railways, energy facilities are all vulnerable. It’s estimated that a further increase in sea level of just one foot by the end of this century could cost our nation $200 billion.”

Climate Change Is A Threat To The Military

“Climate change poses a threat to the readiness of our forces. Many of our military installations are on the coast, including, of course, our Coast Guard stations. Around Norfolk, high tides and storms increasingly flood parts of our Navy base and an airbase. In Alaska, thawing permafrost is damaging military facilities. Out West, deeper droughts and longer wildfires could threaten training areas our troops depend on.”

The Military Is Already Preparing For A Different Future

“Across our military, our bases and ports are using more solar and wind, which helps save money that we can use to improve readiness. The Army is pursuing new, lighter, more fuel-efficient vehicles. The Air Force F-22 broke the sound barrier using biofuels. And the Navy runs an entire carrier strike group — the Green Fleet — with biofuels. Our Marines have deployed to Afghanistan with portable solar panels, lightening their load and reducing dangerous resupply missions.”

Climate Change Is A Threat Multiplier

“…[C]limate change did not cause the conflicts we see around the world. Yet what we also know is that severe drought helped to create the instability in Nigeria that was exploited by the terrorist group Boko Haram. It’s now believed that drought and crop failures and high food prices helped fuel the early unrest in Syria, which descended into civil war in the heart of the Middle East. So, increasingly, our military and our combatant commands, our services — including the Coast Guard — will need to factor climate change into plans and operations, because you need to be ready.”