The bright world of photovoltaics 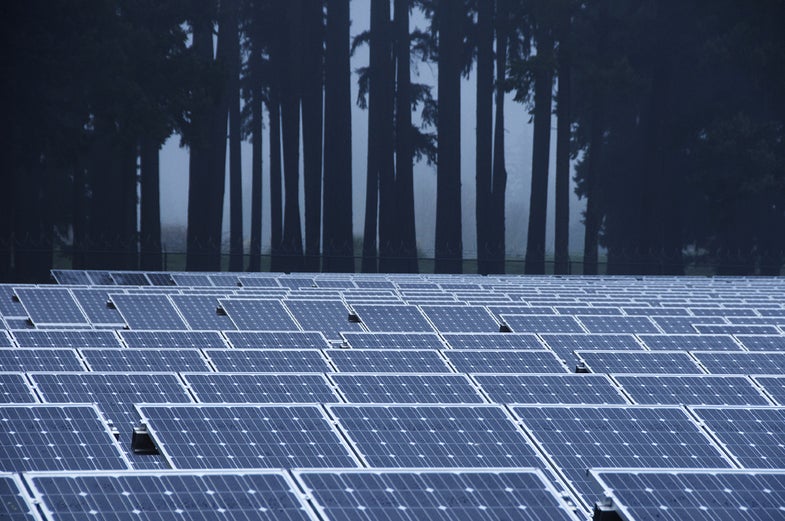 Renewable energy is the future. All over the world cities and countries are vowing to go quit fossil fuels and commit to getting their energy fix from 100 percent renewable sources.

One of the most popular renewable options is solar—especially in areas that are, well, sunny. But in order to capture sunlight and turn it into electricity, you need solar cells, also known as photovoltaic cells.

With solar cells of particular interest to researchers, businesses, environmental groups, and just about everybody else, it always seems like there are new advances in research. Just last week, researchers at Aalto University published a paper in Nature Nanotechnology announcing that they created a black silicon solar cell with an efficiency of 22.1 percent. What does that mean, exactly? It sounds good, and Black Silicon would be a great name for a rock band, but how does it compare with everything else in the wide world of solar power?

Here are three of the most common types of solar cells that you might hear about, and what they do:

Crystalline Silicon: These are the solar cells dominating the market right now. In 2011, 90 percent of all solar cells were made from crystalline silicon. They can convert sunlight into electricity at a rate of 25 percent in ideal conditions. This is what other types of solar cells are measuring themselves against. The downside is these versions tend to be bulky.

Thin Film: Thin-film solar cells are less expensive to produce than crystalline silicon solar cells. Made from cadmium compounds, these cells are around 75 times thinner and can absorb sunlight better than silicon. Their flexibility and low weight makes them ideal as unobtrusive energy collectors. So why aren’t they at the top of the heap? Because they aren’t as good at converting sunlight to electricity as their crystalline silicon competitors… yet. Last year in the lab, thin-film technology reached a high of 20.4 percent efficiency. Not bad.

Black Silicon: Black silicon solar cells are similar to crystalline silicon solar cells. Really similar. The difference is that black silicon solar cells are treated so that they appear to be black on the surface. Why is that a big deal? Think of wearing a black T-shirt on a hot summer day. The black color tends to absorb more sunlight, which translates to an uncomfortable summer afternoon for you, but more energy gathered for a solar cell. It’s an attractive option for areas that don’t get as much sunlight but still want to make good use of the light they do receive. Until now, turning silicon cells black tended to undercut their efficiency at turning sunlight into power, however. That’s why the new paper, showing an efficiency of 22.1 percent is promising.