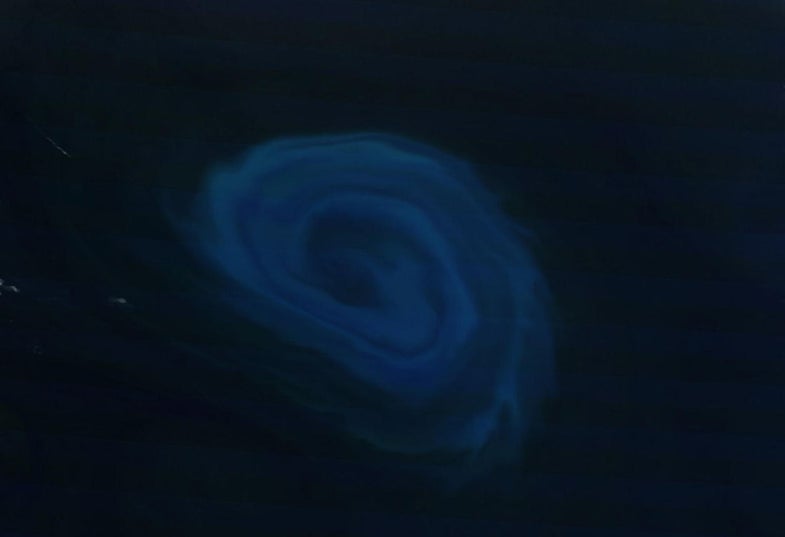 Plenty of fish in the sea? Sure. But you won’t find any in the Atlantic Ocean’s newly discovered dead zones.

In a paper published in Biogeosciences, researchers describe pockets of low-oxygenated water traveling across the Atlantic Ocean. They found these so-called dead zones in 100-mile long eddies, giant whirlpool-like structures that form in the open ocean and that can spin for months at a time. Dead zones get their morbid nickname from their waters’ low levels of oxygen, which make it nearly impossible for any animal life to survive. Animals caught in these regions of the ocean face a simple choice: move, or die.

Dead zones usually form in shallow bodies of water without a lot of mixing. That means lakes and along coastlines during certain seasons. One of the largest dead zones in the world forms in the Gulf of Mexico every summer, fed by nutrient runoff from the Mississippi River Delta. There, the nutrients feed large algae blooms that are then devoured by microorganisms, creating large amounts of waste. Other microbes eat the growing piles of waste, using up oxygen in the water in the process.

The dead zones found by the researchers, however, formed in the middle of the Atlantic Ocean, where there is quite a bit of water sloshing around. So how did these low-oxygenated pockets get there? Essentially, the swirling movement of the eddy creates a wall around a central core of water. The water can’t escape, and quickly burns through its oxygen supply.

“The fast rotation of the eddies makes it very difficult to exchange oxygen across the boundary between the rotating current and the surrounding ocean. Moreover, the circulation creates a very shallow layer – of a few tens of meters – on top of the swirling water that supports intense plant growth,” says author Johannes Karstensen. The plant layer functions like an algal bloom along the coast, eventually leading to lower levels of oxygen in the center of the eddy.

While sea life in the open ocean is definitely most affected by this new discovery, Karstensen anticipates that these moving dead zones could also affect people living in Cape Verde.

“Given that the few dead zones we observed propagated less than 100 kilometers north of the Cape Verde archipelago, it is not unlikely that an open-ocean dead zone will hit the islands at some point,” Karstensen said. “This could cause the coast to be flooded with low-oxygen water, which may put severe stress on the coastal ecosystems and may even provoke fish kills and the die-off of other marine life.”