Venus flytraps know not to eat the insects that pollinate them

The carnivorous plants mostly feast on ground critters like spiders and ants. 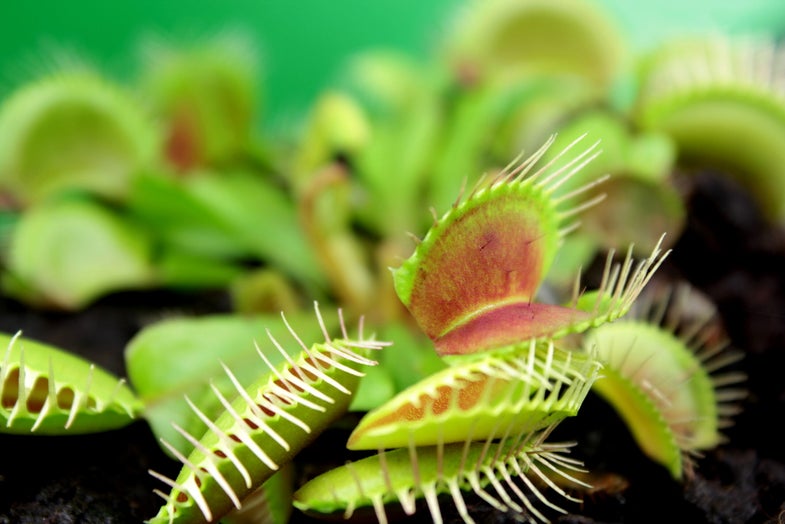 Venus Flytraps’ famous jaws snap up a medley of organisms, including ants, spiders, and of course, flies. In fact, once an organism enters the fly traps’ reach, few live to tell the tale. But now, a new study shows one group of bugs manages to escape. Insects that pollinate the Venus Flytrap, researchers found, avoid the carnivorous plant’s ill-fated menu.

“It’s a globally famous plant—everybody knows all about the snap traps—but very few people know much else about the rest of the plant’s biology,” says Clyde Sorenson, an entomologist at North Carolina State University who worked on the new study.

The Venus Flytrap is native only to the coastlines and wetlands of North and South Carolina. Since it grows so well in the lab, not many researchers go out of their way to study the plant in its natural habitat. And though its a popular pet shop plant, the Venus Flytrap is listed as vulnerable on the IUCN’s Red List of Threatened Species; learning more about it could aid conservation efforts tremendously, Sorenson says. That’s why he and his colleagues, who are local to the flytrap habitats, want to learn more about how the plant lives in the wild.

For this study, which was published in The American Naturalist last week, the researchers catalogued pollinators who landed on Venus Flytrap flowers, which are located six to ten inches above the snap traps. They also recorded what the plants ate by prying open their jaws and collecting the contents, which insect ecologist Elsa Youngsteadt often likened to a treasure hunt.

“We found things that were alive, that jumped out and probably thought, ‘yay freedom!’” Youngsteadt says. “We also got a few that that were mushy, like you could tell it was a spider but not much more than that. And some were so digested we couldn’t even tell what they were.”

When the team got back to the lab and crunched the numbers, they were surprised to find that the Venus flytraps didn’t just eat anything and everything they could get their hands on—the carnivorous plants almost never consumed the insects that pollinated them. The plants most often devoured things like spiders and ants, despite winged-insects like bees and beetles being frequent visitors. In fact, 87 percent of flower-visitors could fly, compared to only 20 percent of prey. “It probably shouldn’t be called the Venus Flytrap,” Sorenson says, “it’s more like a Venus Spidertrap.”

Evolutionary speaking, it’s important that the flytraps don’t eat the bugs that help them reproduce, especially because they have a hard time self-fertilizing. It turns out the seeds have a better chance of growing into a plant if they exchange their pollen among their siblings, so they need insects to transport pollen from flower to flower. Other carnivorous plants, like the pitcher plant, bloom while their traps are closed to avoid that mix-up.

Here, the researchers speculate that the physical separation of the flowers from the traps (often up to 10 inches) could be driving the plants’ selective diet; perhaps the crawlers wandered into traps on the ground, and fliers came to flowers from above. But Sorenson and his team also have an inkling that Venus Flytraps repel pollinators from their jaws using scents or colors, which they plan to study further. Unlocking more pieces of the flytrap reproduction puzzle will help to preserve their existence in the Carolinas, Sorenson says.

“In order to conserve something that’s this rare, you need to know everything you possibly can about their biology and ecology.”