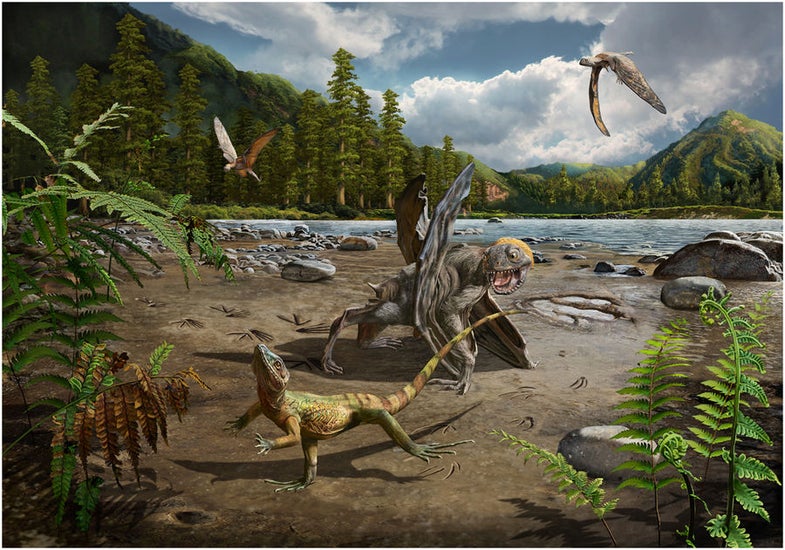 110 million years ago, in the late Cretaceous, lizards schlepped through muddy lagoons in what we now call South Korea. Predatory pterosaurs swooped in every so often, hoping for a little treat—and the lizards got up on two legs and dashed away in the muck like Olympic track stars.

At least, this is what researchers think happened, based on a set of fossilized footprints detailed in a new study.

“In this current Olympic season—although it is winter—it’s hard not to think we discovered Korea’s first sprinters,” says Anthony Fiorillo, a paleontologist and chief curator at the Perot Museum of Nature and Science in Texas who co-authored the study.

Yuong-Nam Lee and Junchang Lü, also study authors, first excavated a rock slab embedded with footprints from a quarry in South Korea while looking for bigger dinosaur fossils. The team didn’t think much of the tiny prints—they were all just under an inch long—but had a eureka moment when talking them over after the dig. “It’s like the television ads you watch at 2 a.m. on the couch,” Fiorillo says. “But wait; there’s more!”

They realized that 25 out of the 29 prints were made by lizards’ back feet, rather than their front. That evidence, along with stride length and the differing angles the lizard toes made, told them that some ancient lizards could get up and run bipedally, as noted in their study published Thursday in Scientific Reports. They were also able to estimate that the lizards would only stand about two and a half inches tall.

We see a handful of lizards run on two legs today to escape predators. Take the common basilisk, for example: it’s colloquially called the Jesus Christ lizard for its ability to dash across water on two legs for as long as 15 seconds when being pursued by predators like snakes.

These miniature prehistoric lizards probably got up and ran to escape predators as well, the researchers speculate. They found pterosaur footprints nearby in the quarry, and recent research suggests the winged beasts didn’t dine selectively on fish; they might have enjoyed the occasional dinosaur hatchling or lizard snack. “If something dropped out of the sky with a pointy beak and chased me, I’d run as fast as I could too,” Fiorillo says. “It’s a reasonable scenario.”

Whatever their reason for running, the fact that the reptiles could do it at all was surprising to Fiorillo and his co-authors. They didn’t realize this sophisticated behavior first happened over a hundred million years ago.

“I always marvel at what the fossil record can show us,” Fiorillo says. “Things we don’t expect to see, we can see. It’s yet another example of how remarkable fossils can be if you have the right eyes to look.”