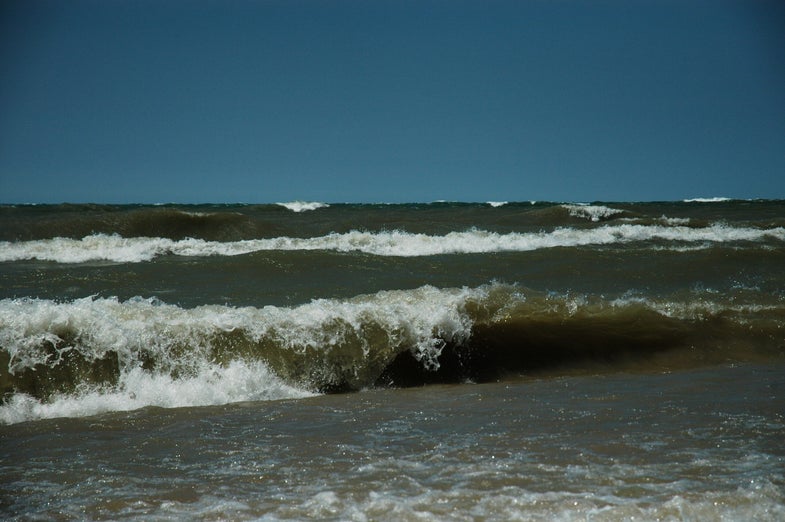 We usually think of algal blooms as a waterborne nuisance. Some of these slimy-looking mats, formed when microscopic plant-like organisms and bacteria grow out of control, secrete toxic chemicals that cause liver damage, vomiting, or neurological problems. They can pose a serious threat to public health; in 2014, a bloom contaminated the water supply in Toledo, Ohio and left residents without safe drinking water for days.

It turns out danger may lurk in the air as well. When waves out on the Great Lakes churn up water during a bloom, they could be sending pieces of algae and their toxins flying, scientists recently reported in the journal Environmental Science & Technology. These particles can float off on the wind for miles. That means people living near the lake might be breathing in algal toxins without realizing it. And this isn’t just a problem for folks living on the water.

“It shouldn’t be thought of as something that’s just going to happen right next to the coast,” says coauthor Andrew Ault, an assistant professor of environmental health sciences and chemistry at the University of Michigan in Ann Arbor. “Especially when you have high winds, things could get carried pretty far inland.”

Scientists have known for years that some toxins from red tides on the ocean can be tossed airborne by sea spray from breaking waves and travel inland. “But nobody had really thought to look at this in the Great Lakes region or for freshwater lakes in general,” Ault says. These lakes see their fair share of high winds and turbulent waters, though, and massive algal blooms regularly form there in summertime.

To investigate whether freshwater blooms might be launching algae, the researchers collected samples from three sites on Lake Erie and Lake Michigan in Ohio and Indiana. In the lab, they mimicked the effects of lapping waves by firing a jet of water into the samples that was calibrated to whip up bubbles the same size as would naturally form out on the water. When those bubbles reached the water’s surface, the film on top popped and a tiny jet of water squirted up through the middle, pitching particles into the air.

When a bloom isn’t underway, these particles are mostly calcium carbonate, which is a plentiful mineral in the lakes. But the more cyanobacteria, or blue-green algae, were floating in the water samples, the more biological material shot into the air. This includes “cells guts” from algae that were shredded when the bubble burst and, most likely, toxins.

Ault and his colleagues found that calcium carbonate particles from the lakes can make it 30 to 40 miles inland. This suggests that when a bloom is in progress, toxins travel far from the water’s edge as well. They might pose the greatest hazard during late summer and early fall, when the winds start to pick up and break up algal blooms that have been growing all season.

It’s not clear yet how much toxic material is getting into the air and what concentrations of these toxins people might actually be breathing in. In future, Ault plans to find out by using a filter to catch particles carried on coastal winds at different sites in the Great Lakes region.

Different areas around the country might not all be vulnerable to this algal mist in the same way, he says. A region’s risk might depend on its climate and what kind of algae it hosts. However, algal blooms are generally on the rise because climate change and pollution from fertilizer runoff are giving them the warm conditions and glut of nutrients they need to thrive.