The city’s elusive cougars will do a lot to avoid people, including getting risky with wildfire. 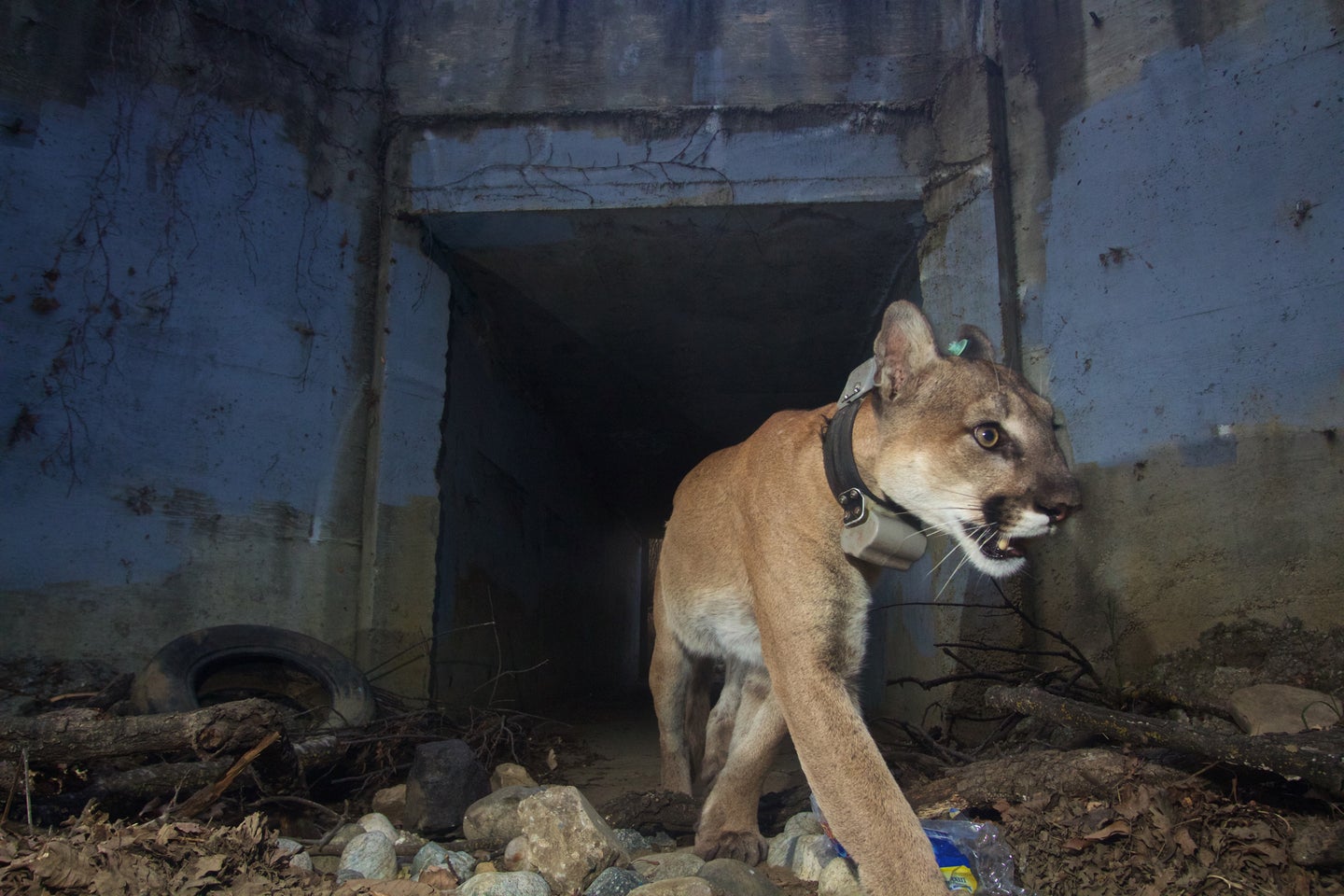 On Nov. 8, 2018, faulty electrical equipment in California’s Woolsey Valley sparked a wildfire that enveloped the Santa Monica Mountains. The Woolsey Fire burnt through nearly 100,000 acres of land on the western edge of the greater Los Angeles area, destroying over 1,600 structures and killing three people.

This mountainous landscape is the home territory of LA’s legendary mountain lions, which have held on here despite urbanization and habitat fragmentation. But the fire eliminated half of their remaining habitat, including 88% of the national park land in the Santa Monica Mountains National Recreation Area. Rachel Blakey, now a professor at Cal Poly Pomona, lived in LA at the time of the fire and began to wonder how the lions were affected.

“I was a really big fan of the LA mountain lions, as most Angelenos are,” Blakey said. “And I thought, my goodness, what’s happened? How has this wildfire impacted them, when they already have this kind of hemmed-in area?”

The results of Blakey and her co-authors’ research were published in Current Biology on Oct. 20. Using GPS tracking to map the lions’ travels and accelerometer data to record their activity, she and her collaborators compared the animals’ behavior during the 15 months before and after the fire.

Two lions died in the fire, but many more struggled to survive in the years that followed. Blakey described the charred landscape as a “moonscape” without the vegetation and cover that the cats need to ambush their preferred prey, mule deer.  The lions avoided the burned areas and took greater risks in search of better habitat, crossing busy highways. When they entered the territories of dominant males, interspecies conflict resulted.

Researcher Jeff Sikich, who has studied the Santa Monica population for more than two decades and worked on the research with Blakey, said in an interview that more mountain lions are killed by cars than any other cause. If the fire forced them to cross roads more often, even more deaths were likely.

A young male known as P-61 survived the fire, but in seeking out more suitable habitat afterward he became an indirect victim of it. He was the first collared mountain lion recorded crossing the 405, a major highway with heavy traffic. His initial crossing was successful, but he inadvertently entered the territory of another male, which attacked him and drove him out. Later, he was recorded contemplating a second crossing. But this time his luck ran out, and he was struck and killed by a vehicle.

In the aftermath of the fire, some residents expressed fears that mountain lions would move into more urbanized areas, the researchers reported. But their monitoring showed that the cats only marginally increased their time in such areas. The cats have a “strong tendency to avoid these urban areas,” Sikich said, and that remained true even after the fire. On average, they spent only 5% of their time in urban areas, with even the boldest spending no more than 15% of their time there. When a mountain lion known as P-64 was caught between a burned area and a busy urban space, he chose the smoldering vegetation over the chance of human contact. He was seriously burned, and, unable to hunt, he died.

Winston Vickers, a wildlife veterinarian and researcher with UC Davis, works with a similarly isolated mountain lion population in the Santa Ana Mountains on the eastern side of LA. He has also seen cases where animals would rather risk a fire than encroach on human spaces. “We’re getting more and more (isolated populations), especially in places like coastal California,” Vickers said. He said that the study is important for helping researchers understand how fire can impact isolated populations.