The surprising link between caterpillar poop and our climate

Caterpillars eat and poop—a lot. All that waste could be contributing to carbon emissions. 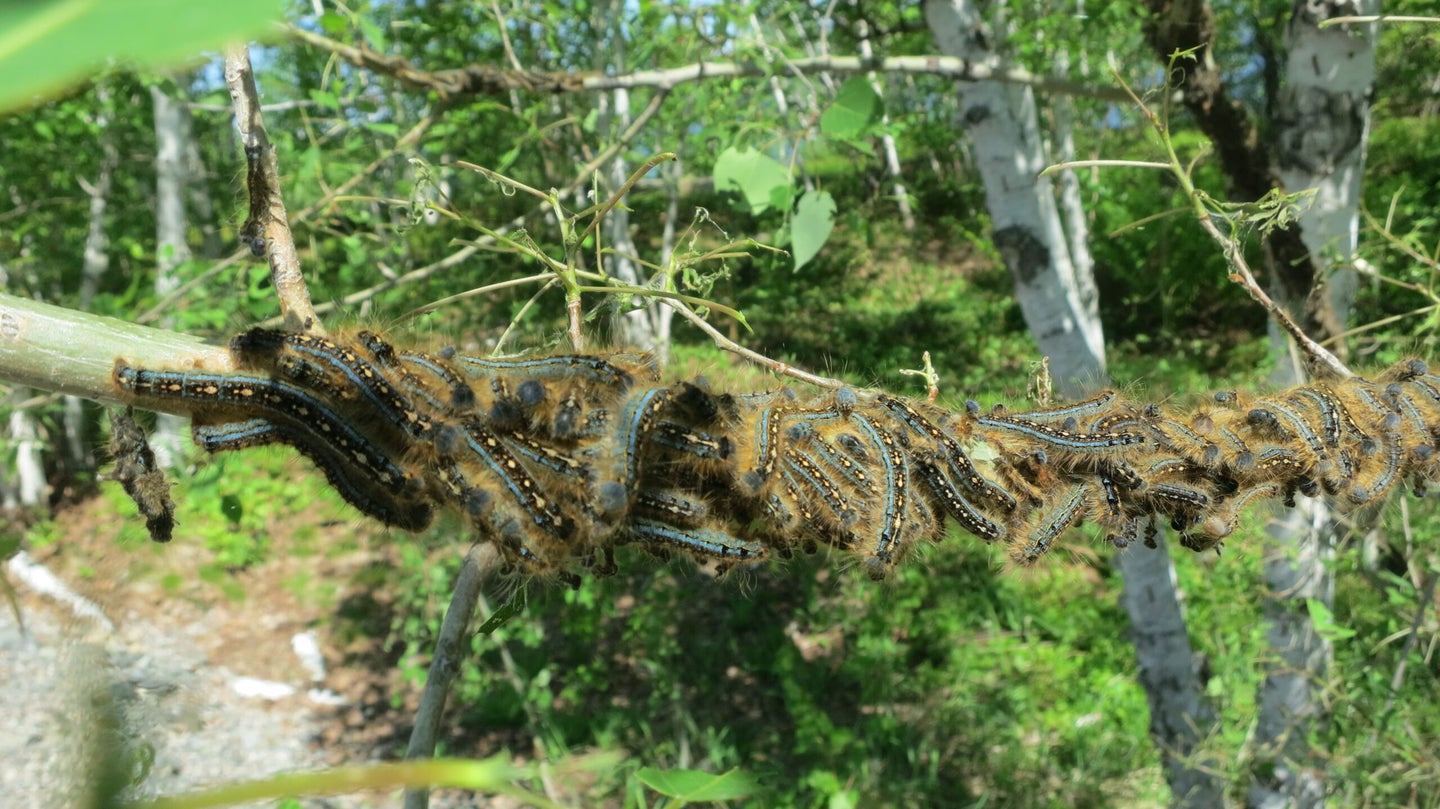 Some caterpillars, researchers have found, are an underestimated contributor to carbon emissions. John Gunn
SHARE

An iconic children’s book about a very hungry caterpillar sensibly omits the process that naturally follows chowing down on all that good food: waste. It turns out that at least some caterpillars are an underestimated contributor to carbon emissions. If you’re envisioning tiny cows and caterpillar farts floating up through the ether, that’s not quite it. The process is much more circuitous.

A new paper encapsulates 32 years of data and satellite images over a 430,000-square-kilometer area of Ontario, Canada, looking at the waste of insects that munch on leaves, known as defoliators. Published today in the journal Nature Communications, the paper concludes that the gypsy moth caterpillar (Lymantria dispar) and tent caterpillar (Malacosoma americanum) indirectly contribute carbon emissions because their nitrogen-rich waste ends up in nearby bodies of water.

“It’s a powerful study, building upon decades of that kind of work,” says Christopher Williams, a geography professor at Clark University who was not involved in this study. “It’s exciting to see one that traces new drivers of insect defoliation that are representative of disturbances expanding across our landscapes.”

Just like the protagonist in The Very Hungry Caterpillar, gypsy moth and tent caterpillars love munching on good eats, devouring tree leaves for their carbon. What’s more, they’re not picky eaters, and eat both deciduous and coniferous tree leaves. When these caterpillars crunch through leaves, they absorb the leaf’s carbon and nitrogen. With no use for the nitrogen, the element becomes waste, known as frass.

“The caterpillars take the nitrogen and shuck it out their rear end onto the landscape,” says Andrew Tanentzap, professor of global change ecology at the University of Cambridge and one of the authors.

The nitrogen-heavy frass washes into nearby bodies of water. Nitrogen spurs bacteria growth, and the bacteria, in turn, emit carbon dioxide. On the other hand, carbon usually feeds algae, so the lakes grow less algae since they have less carbon.  While carbon feeds algae in a lake, nitrogen feeds bacteria, so the lakes that take in all this frass gain all the nitrogen. The bacteria that thrive on all this nitrogen then emit carbon, which goes into the atmosphere. While these lakes become super-charged with nitrogen, they aren’t balanced out with carbon because the caterpillars eat it all. Tanentzap says over the 32 years he’s seen up to a 30 percent reduction in carbon levels in lakes during insect outbreaks, in contrast with more than 100 percent increase in nitrogen.

[Related: Humans are pushing into animals’ homes, but nature is as rebellious as ever]

An insect outbreak, as Tanentzap says, is when more than 50 percent of an area is defoliated by critters. According to the data used in the paper, in some areas this occurred about every five years, but in others these outbreaks occurred more frequently. The gypsy moth and tent caterpillars are scattered throughout Eastern North America, so they’re not contained to the surveyed area. This phenomenon is widespread, but the consequences still aren’t clear. Tanentzap aims to look further into factors like just how much carbon might be emitted. “The study I’d love to do would be to measure this effect, that whole lake scale of the exchange of carbon between the lake and the atmosphere,” says Tanentzap.

As for whether this fecal effect is a good or bad thing, “it’s sort of a bit of a bit of a mixed bag, right?,” Tanentzap says. If communities want to set out to offset the carbon production, they might turn to pesticides, for example. However, they then would have to reckon with those consequences. And if communities want to try to offset this carbon production caused by caterpillars, they would have to reckon with the consequences of using pesticides.

Tanentzap underscores that this finding is less a clarion call for climate action, and more a reminder that everything is interconnected, no matter how disparate they may seem at first.