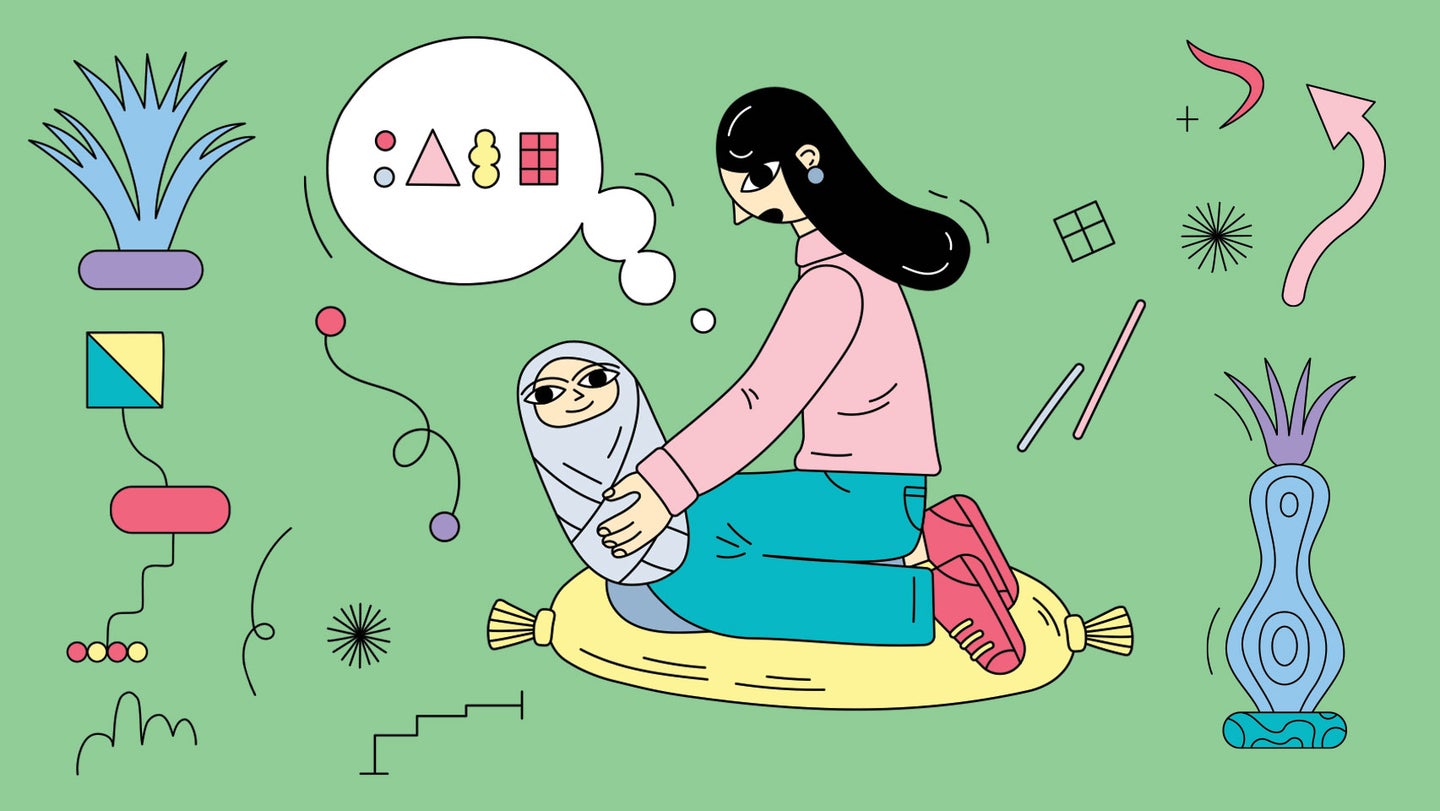 Baby talk sounds like gibberish. But for its intended targets, it could mean much more. Natalia Dzhola

You know how your voice automatically jumps an octave when you’re around a baby? There’s a reason for that.

“CAN YOU SAY MAMA? Or dada? Wave bye-bye!” If you’ve spent any time around a baby, chances are you’ve heard or said things like this. The high-pitched, singsong tone we switch to when interacting with young children can go by many names—baby talk, parentese, or, according to development specialists, infant-directed speech. But as simplistic as this melodic chitchat might seem, the conversations are crucial.

Baby talk is an essential piece of speech and language development. Studies show that when infants are exposed to daily doses of it throughout their first year of life, they develop more robust vocabularies than other kiddos. And the little ones are eager for it: The distinct tone of parentese grabs their attention, recent research shows, allowing them to reap the benefits. By analyzing the jabber between babies and caregivers throughout the world, investigators have pinpointed key components of the tender interactions—elements that, when parents apply them, help their tots learn more words and promote social interaction.

Infant-directed speech wasn’t always valued. Prior to the middle of the 20th century, researchers largely ignored it as a subject of study. From the late 1950s, when linguist Noam Chomsky proposed that humans had an innate capacity for language, until the early 1990s, many developmental psychologists and linguists believed that if left to our own devices, we would intuitively learn how to speak and form complete sentences. Some doctors even advised parents to avoid using baby talk, thinking it too silly or patronizing. But over the past few decades, numerous studies have found that throughout their first year of life, when wee ones are regularly exposed to euphonious babble in addition to normal speech, they process, learn, and remember words presented to them in cooing tones better than conversations spoken in adult language.

One reason, says Megha Sundara, a linguistics professor and director of the Language Acquisition Lab at the University of California, Los Angeles, may have to do with how infants interact with the world. They tend to tune out adult conversations and other background noises, she says, but their ears perk up when a caregiver initiates that singsong tone. “If given the choice,” she says, “babies will usually choose infant-directed speech over adult-directed speech.” Because it sounds so different from the chatter grown-ups typically use with each other, it also might signal to the tots that these sounds are meant for their ears.

This seems to be true of kiddos around the world. A 2020 global study led by Stanford psychologist Michael Frank observed 2,329 babies from 16 countries. The results, published in Advances in Methods and Practices in Psychological Science, showed that no matter the nation, little ones preferred listening to and engaging with chitchat meant for their ears. Even the babies from non-English-speaking countries favored English parentese over English adult speech, but the preference was especially strong for tots already familiar with English. In a complementary 2021 study that Sundara coauthored, researchers observed 333 babies from bilingual homes and 384 infants from monolingual houses on four continents. Their original results held for babies they studied around the world, whether they were hearing one language or two at home.

Tiny humans may be particularly drawn to parentese because of its unique sound. Sundara surmises the expressive tones share many characteristics with how adults speak when they’re happy. She notes that when we use infant-directed speech, “Our pitch is very high, and we use exaggerated pitch changes. That is quintessential. I could be in the other room and you could tell I was talking to a baby.” Other components are key too. “We also speak more slowly, we have shorter utterances, and we tend to speak more clearly,” she adds.

In fact, a 2017 study led by Elise Piazza, now a professor of brain and cognitive sciences at the University of Rochester, found that the entire timbre of the voice perceptibly changes when it’s directed at an infant. Timbre, or tone, is distinct from pitch and cadence. An example: Even if the singer Adele hits the same notes as Miley Cyrus, their respective soulful croon and husky rasp still sound different. Using a machine-learning algorithm, Piazza’s team showed that 24 mothers speaking various languages all adjusted their timbre in the same way when talking to their little ones.

Humans also aren’t the only ones who use baby talk. In a 2020 study, researchers at the Free University of Berlin studied parentese among greater sac-winged bats in Central America and found that the furry, winged parents also used a different pitch and timbre to vocalize with their pups. Baby talk has also been observed in a few other species, such as squirrel monkeys crooning and zebra finches chirping to their offspring.

[Related: Both bats and humans test out talking as infants]

By cutting through the babble and delineating what about infant-directed speech is most important, researchers have been able to advise parents on the best ways to jabber. Institutions from Harvard to UNICEF have developed training modules to help babies meet speech and language milestones faster.

A February 2020 study led by University of Washington linguist Naja Ferjan Ramírez found that this type of crash course can enhance the positive effects of baby talk. Researchers captured parent-child interactions at home, equipping infants with vests containing recording devices that listened for two consecutive days at 6, 10, 14, and 18 months of age. Before each session, some of the adults were coached on using infant-directed speech effectively, while others received no training. The kids of trained grown-ups performed better throughout the study, and subsequent surveys showed the benefits lasted: At 18 months, the average vocabulary of children whose parents had received coaching was about 100 words, whereas children in the control group averaged about 60 words.

Researchers are still trying to probe how baby talk functions and why it’s so beneficial. Better insights into the role it plays in a child’s growth could help psychologists and others identify infants at high risk of developing a language disorder, says UCLA’s Sundara. And maybe, eventually, she says, it could usher in earlier targeted treatments and therapies. So don’t be shy, sing, “Who’s that? That’s Mommy!” as much as you want—babies everywhere are listening.