Nothing ever comes free. 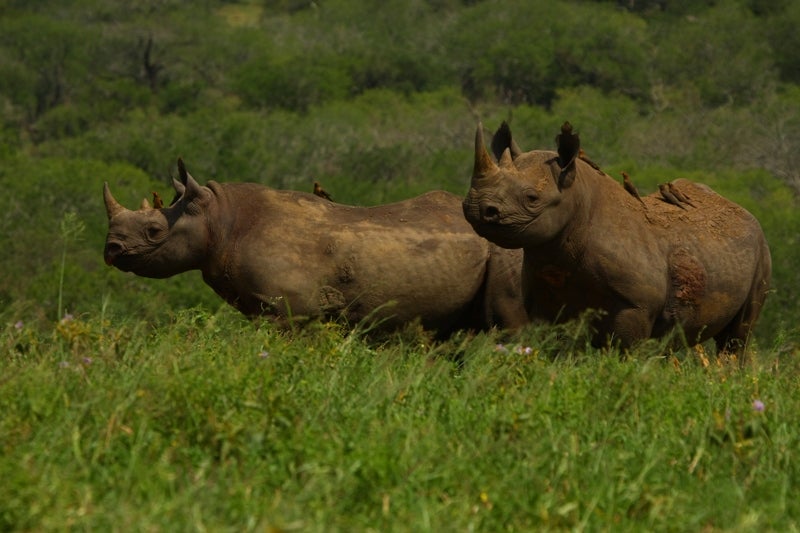 The little birds act as a set of eyes, keeping watch for human hunters than a rhino can't detect on it's own. Jed Bird
SHARE

Rhinos are massive, gorgeous, creatures with very few natural predators. Despite this, these beauties are critically endangered and are tough to find outside of wildlife parks and reserves. This is mostly due to an increase in poaching. But according to a recent study, protection could come from an unlikely source: The small but mighty oxpecker.

Rhinos are nearly blind as a bat and tend to fly solo, which makes detecting an unfriendly hunter or defending themselves from one a tricky task. But a winged, vampire-like frenemy could be the difference between a rhino roaming scot-free and being surrounded by danger.

The relationship between rhinos and oxpeckers goes way back. In fact, the Swahili word for the bird is quite literally “the rhino’s guard.” In a seemingly mutualistic relationship, the oxpeckers ride around on the backs of rhinos, picking ticks off their backs and giving out a warning hiss when predators including humans ventured too close.

But the benefits of this relationship had never been demonstrated scientifically, until this past week. A new study in Current Biology shows that when a rhino has an oxpecker riding around on its rump, the animal has a much better chance of avoiding people altogether.

The authors of the study spent over a year in South Africa following around the massive beasts. They initially tagged around a dozen rhinos to keep track of their location. Then they went back out to find whatever rhinos they could. Of the rhinos they found in their second search, the ones that were already tagged, and they were able to find their location ahead of time and essentially “stalk them”, had a 56 percent chance of roaming around with a bodyguard on board.Further, the ones that were untagged (meaning they hadn’t found them before and tagged them) were much less likely to have an oxpecker on their backs.

‘‘There’s a whole heap of [untagged rhinos] avoiding us because they have oxpeckers on their back,” said South Africa-native Roan Plotz, an author of the study and an environmental science lecturer at Victoria University in Australia.

Next, they practiced sneaking up exclusively on the tagged rhinos that they could more easily hunt down and recorded whether or not they had a bird riding along or not.

Rhinos with no oxpecker looking after them only noticed their human stalkers about a quarter of the time, at a distance of around 23 meters (about 75 feet). With an oxpecker guard, however, the animals detected a human creeper 100 percent of the time at a much larger 61-meter (200 feet) range. The birds provided a clear advantage to keeping away from potential hunters.

However, the relationship between bird and beast is more complicated than it seems. Plotz also found that the birds, who rely on the rhinos for sustenance, were more likely to target open bleeding lesions on the rhinos for a meal than tick-heavy spots, meaning the birds prefer to pick and snack on a rhino’s painful scabs than it’s bothersome ticks. That’s about as lovely for the rhinos as it sounds.

“Feeding on lesions or blood is a parasitic behavior,” says Plotz.

And it’s not just rhino sores that sound delectable to an oxpecker. Other African wildlife, like African buffalo, get lesions but roll around or shake their horns to shoo away the parasitic birds every time one comes near them. Rhinos, on the other hand, tolerate the icky behavior.

“There has been a widespread belief that the mammal-oxpecker interaction is a mutualism, i.e., that both species receive benefits from it,” says Judith Bronstein, an evolutionary biologist at Arizona University not involved in the study. “The authors know better, which I really like.”

But for the rhinos, the benefit of having a bodyguard outweighs the fact that the bodyguard is low key eating their flesh. After all, relationships always come with some kind of cost-benefit analysis, whether it’s between a hungry bird or an annoying roommate. As long as the benefit is in our favor, sometimes it’s worth it to put up with a little bit of bad behavior, Plotz says.

“In any relationship, I suppose we all do that.”