Lemurs can, lemurs can keep a beat. 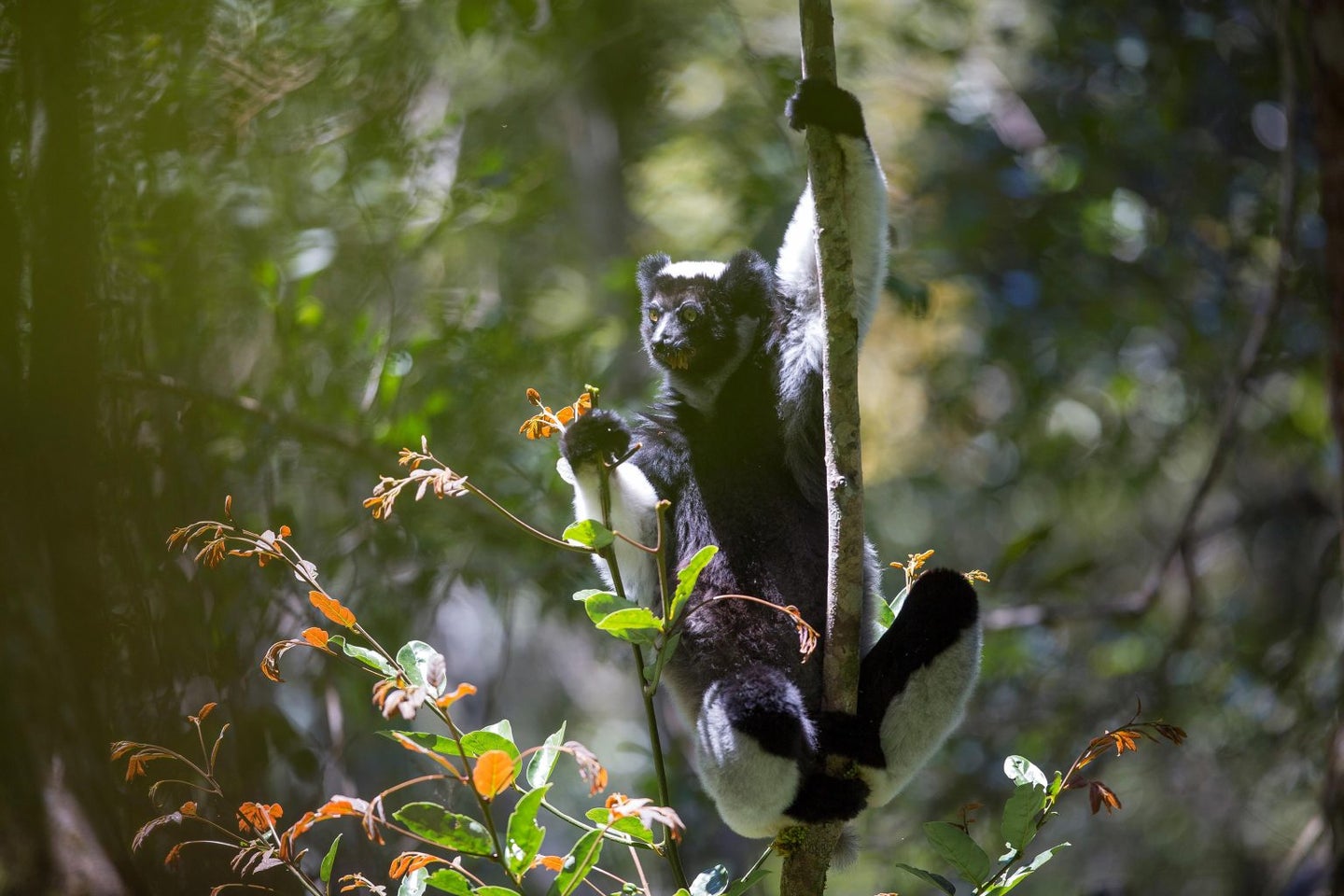 Indris, a species of lemur, sing with a rhythm similar to that of Queen's "We Will Rock You.". Filippo Carugati
SHARE

When humans listen to music, we hear a beat. It’s so self-evident, and so foundational to our lives, that it’s hard to imagine how rare that experience is in the animal kingdom. Because here’s the thing: a beat isn’t necessarily a tangible part of music, but a property of human experience, says Andrea Ravignani, who studies human and animal musicality at the Max Planck Institute for Psycholinguistics. “It’s a bit like if you’re looking at clouds, and you’re spotting shapes and animals. Your perceptual system partly creates it, because we’re really drawn towards perceptual regularities.”

Beat is sort of like a pattern that our brains pull out of a complicated series of sounds. Take Queen’s “We Will Rock You.” It opens with a series of percussive notes—boom boom clap, boom boom clap. The first two are quick, and the third is slow—short short long. The long note lasts just as long as the first two fast notes, and humans hear that pattern as four beats. if you dance to it, you’d probably move to a four-beat rhythm.

Very few other animals appear to experience music in this way, even if they do sing. In 2020, a team documented a similar pattern in thrush nightingales, a robin-like songbird. And according to new research published in Current Biology, so do indris, a species of lemur that’s native to the forests of Madagascar.

Indris, which are critically endangered, live in small family groups in thick rainforest, and sing to communicate through the trees, says Chiara De Gregorio, a primatologist at the University of Turin and the study’s lead author. The songs carry for miles, letting different families talk to one another, and are “also used when a group member loses visual contact…and so they sing to locate one another and reunite.”

Indri song, which consists of a series of long, clarinet-like howls, is self-evidently remarkable. “You can really feel it in your belly, right?” says Ravignani, who co-authored the study. And Malagasy people who live near them have long understood indris to be human-like. According to local tradition, lemurs are seen as ancestors to humans, says De Gregorio. “One day, one indri left the forest to live in the fields, becoming the first human. From that day, the legend says, indris cry every day in the forest for their son that went away.”

Previous research had already noted that indri music was rhythmically complex, but to dig into the possibility that the lemurs have a sense of beat is tricky. Because beat, if it exists, would be a subjective experience that takes place inside a lemur’s brain, it’ll never be directly visible. Instead, the researchers focused on one of the downstream effects of the beat: regular rhythms in song.

“What we are finding is that indri produce rhythmic patterns that would be quantitatively very similar to ‘We Will Rock You,’” says Ravignani. The team recorded songs sung by about one percent of all living indris, and found that they followed a pattern: short, short, long. And they held the short notes half as long as the long notes, just like Queen. That means they might be singing to a four-part beat, just like we would. There’s even evidence that the indris intentionally slow down that rhythm at the end of a song, just like we do when singing “Happy birthday.”

“We can reverse engineer it,” Ravignani says. “If we can do this thing because we have the beat, and the lemurs can do it too, then maybe they have the beat.”

There are other explanations, he acknowledges. “It could be more physiological, having to do with breathing. But the most important thing is that they have these rhythmic categories.” Those have never been seen in mammals before, and signal that something profoundly unusual is happening.

“Traditionally, birdsong has been very strongly linked to music—there were even composers transcribing birdsong in Western musical scores,” Ravignani says. “Mammals have been a bit neglected in this respect.”

And finding the trait in our close relatives could shed more light on how humans developed our musical abilities. It’s not clear exactly what similar evolutionary pressures could have caused us to develop a sense of rhythm. Ravignani says that one parallel might be the role of singing in socialization: Indris sing together in choruses, which he links to the human love for chorusing, and even jamming on instruments. “There might be a link between rhythmic capacities and interactive singing.”

“The story of animal cognition and human cognition is full of cases in which people say, “Oh, I reckon this one trait, like empathy, or theory of mind, is a unique human trait,’” says Ravignani. But that’s rarely held true for long. Although we’ve got a combination of skills that our animal relatives don’t, when it comes to individual traits, we’ve often got more in common than we expect.