How to not get pricked by a North American porcupine 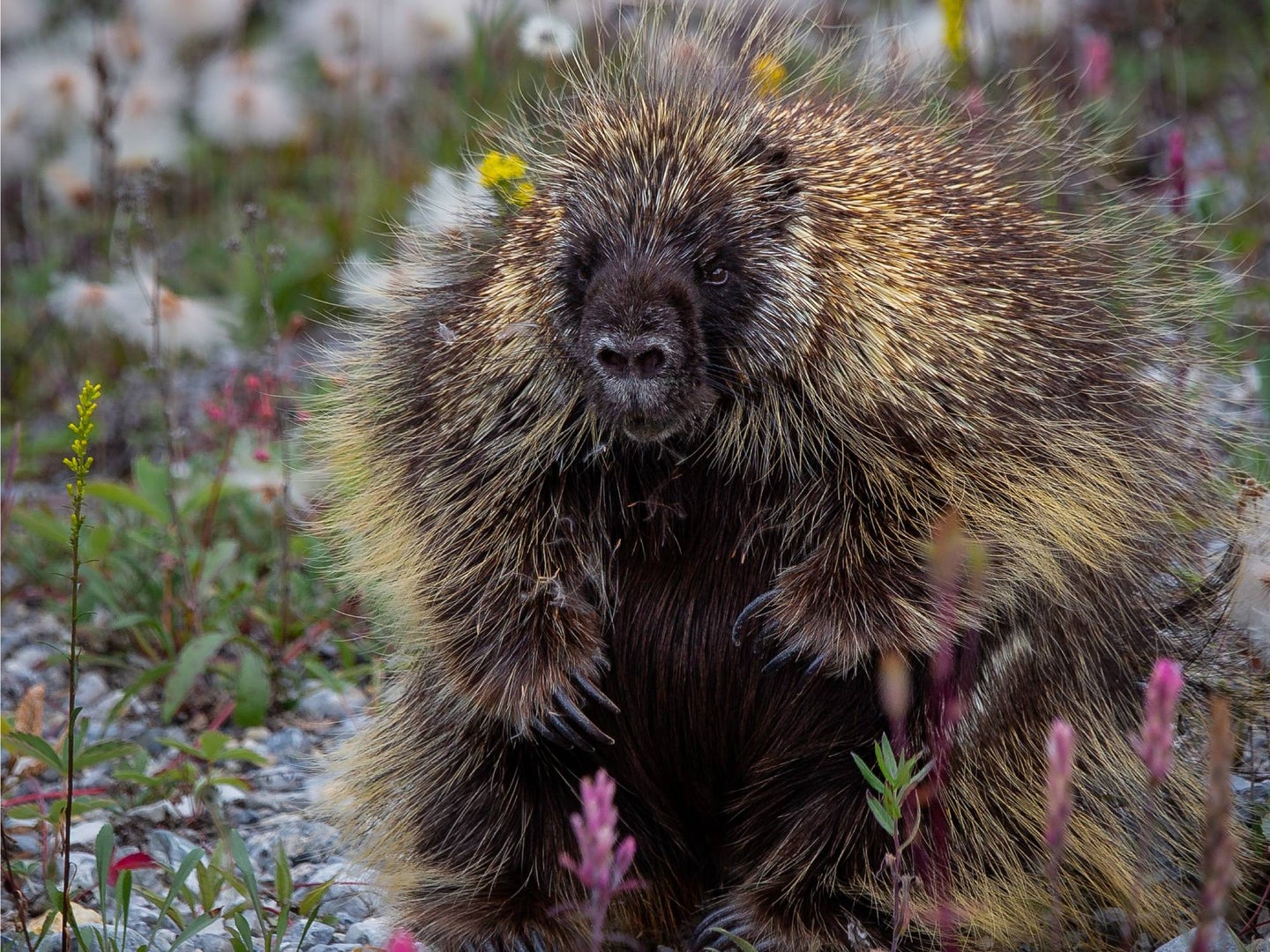 Porcupines are so cute you could hug them—just don't. Pete Nuij / Unsplash
SHARE

Crossing paths with a porcupine isn’t an experience you’ll soon forget—it’s hard not to be intimidated by a ball of spines the size of a small dog. But the animal behind this menacing exterior is actually a harmless herbivore.

True to its name, the North American Porcupine’s habitat goes all the way across New England, the Western US, Canada, and up into Alaska. While it’s one of the continent’s largest rodents— measuring up to three feet in length—this spiny friend is nothing to be afraid of.

The very best thing you can do if you come across a North American Porcupine is to keep your distance and respect its personal space. The rumor that porcupines can shoot or throw their quills at aggressors is only a legend, but there’s no need to test that out for yourself.

Coming too close to a porcupine can make it agitated and nervous, and it may deploy its best defense mechanism—swinging its thickly quilled tail at you in the hopes of lodging a few spines into your skin.

[Related: These animals will self-amputate arms, legs, and even sex organs to survive]

A porcupine’s quills are only lightly attached to its body, meaning they will easily come loose when used in self-defense. It’s extremely important to keep dogs and other pets away from porcupines, as these rodents won’t hesitate to defend themselves, and can take even a curious sniff as a threat if they feel vulnerable.

But porcupines aren’t looking for trouble. In fact, they are generally solitary creatures who prefer to stay away from humans and other animals when possible. As long as you keep a respectful distance of 20 feet or more, you’re very unlikely to receive a nasty tail swipe.

There are a number of ways to tell whether you’re getting close to a North American Porcupine. The first and most obvious sign is the sight of a large ball of spines lumbering along the ground or (more often) perched in a tree is a dead giveaway.

But there are also other signs to look out for. Porcupines love eating the nutritious under-layer of tree bark and will go so far as to chew it off of trees in large portions. If you see a tree with large patches of bark missing, especially if these areas feature scratches or tooth marks, you may have stumbled across a porcupine’s meal.

The second best way to identify porcupines is by sound. They’re too large to move silently, so rustling and scratching noises in the underbrush or up in the branches of young trees is a good sign that they may be nearby. You may also hear their distinctive vocalizations, which some describe as “kazoo-like.” Their whines, squeaks, and chittering sounds are unlike many other common forest animals, so listen carefully if you’re eager to know their whereabouts.

Your last line of defense against encountering a porcupine by surprise is your sense of smell. When threatened, porcupines release a strong odor meant to warn predators that quills are about to be deployed. It’s unlikely that you’ll come dangerously close to this large rodent without seeing or hearing it first, but trust your nose while exploring the forest—if you detect a sudden smell, stop where you are and look around for porcupines. If you see or hear one, slowly back away and give it plenty of space as you continue your trek through nature.

Porcupines and the human world

Unless you live in a remote forest, it’s unlikely that you’ll see North American Porcupines strolling through your property. However, there is a chance that this spiny creature may end up in a residential area due to drought, lack of food resources, or other issues with its preferred habitat, which are situations that are becoming more and more common due to the climate crisis.

If you spot one in your yard, the best option is to let it trundle away of its own volition. This will usually happen within a few minutes, but they may want to hang around on your property longer if there’s a particularly appetizing tree or a source of salt.

Porcupines are almost always on the hunt for salt, which is a key nutrient that’s difficult to find in the wild. Ice-melting road salt, salty food scraps, and even the dried crusts of salt on sweaty gardening gloves and other work gear can prove irresistible to porcupines. Secure these items in sealed containers in your garage, shed, or home to make sure porcupines can’t access them.

If you’re eager to catch a glimpse of these critters, you can leave out a salt block especially for them to find. Place it away from your home in a secluded location, perhaps near a few trees, and see if any spiky guests drop by.

In general, a porcupine on your property is no cause for alarm. The worst damage it can inflict is slowly killing a tree by stripping away much of its protective bark and eating all the green shoots off new branches. If a porcupine is snacking on a tree in your yard that will cause damage if it falls, contact your local wildlife department for advice on what to do. There are no commercial products that have been proven to repel porcupines, but an expert wildlife handler may be able to trap and relocate the animal before it causes too much damage.