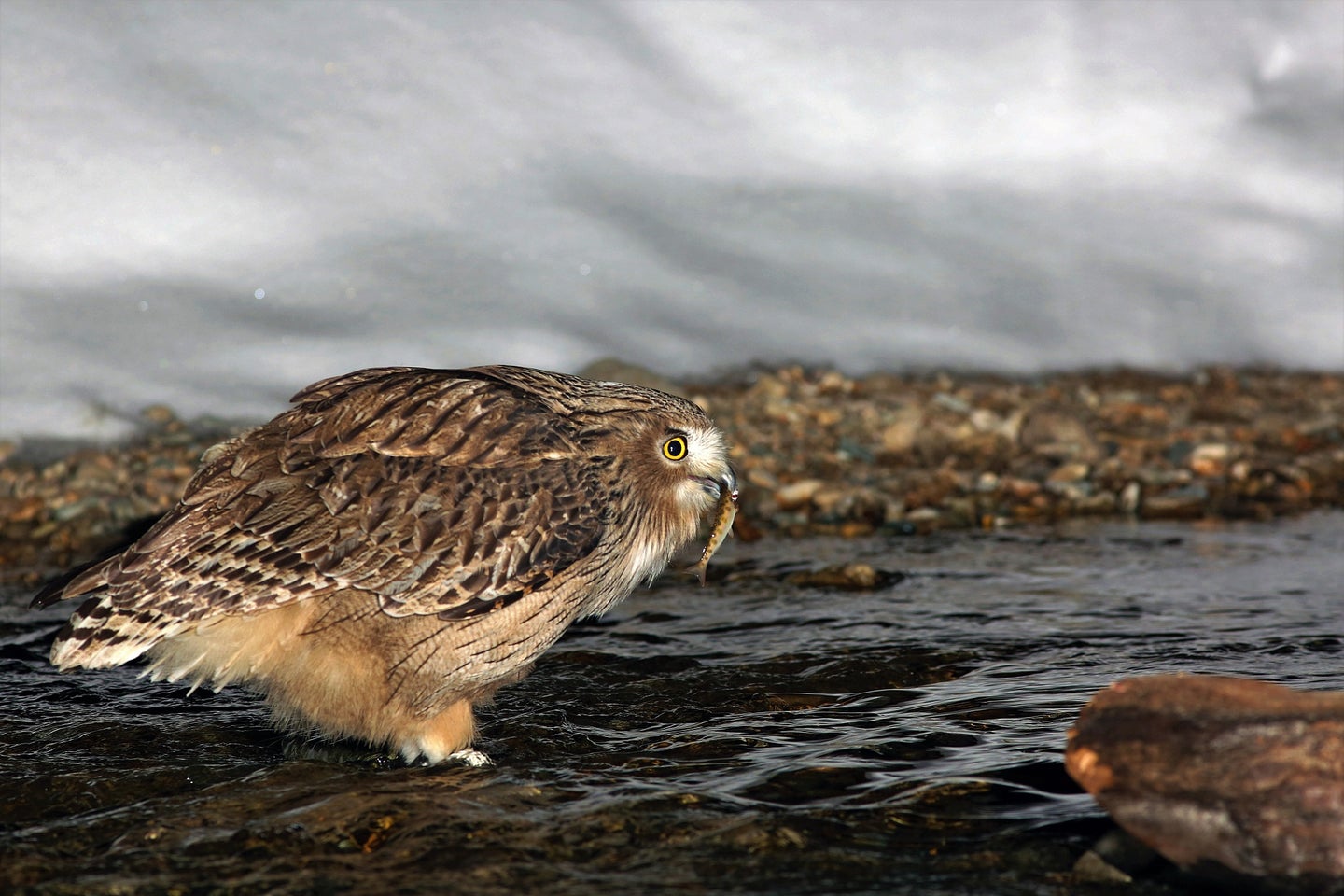 With a wingspan of 5 to 6 feet and a home range in Japan and the Russian Far East, the Blakiston's fish owl is one of the most secretive birds known to conservationists. Sergey Gafitski
SHARE

The fall traps did not pan out. Either the resident fish owls were not interested in the frozen marine fish we offered as lures or the birds were unwilling to walk under the suspicious netted domes to investigate them. At about two o’clock one morning, a few days after the blizzard ended, Sergey and I sped three kilometers on the snowmobile in response to a beeping trap transmitter, only to discover a false alarm: ice had caused the net to sag and this tugged on the string that activated the beacon. Sergey, tired and frustrated and cold, kicked at the frame, breaking it, then threw the remains into the forest. Thus concluded the fall trap experiment.

The capture learning curve was steep. There were multiple nuances specific to each trap and to each capture site. Since late February, we’d had a few very near misses. When we started out the season, we thought that four owl captures seemed like a reasonable target, but I was ready to backtrack on that goal with the realization that simply learning how to safely and efficiently catch these birds would be success enough for me for this year. If we had one or two captures to show for it at the end of the season, after all these failures, I would be satisfied. We were well past the midway point of the field season; if the weather held, we’d have three, possibly four, weeks left before the capture window closed. After that, spring would bring unstable ice, rising waters, and unsuitable conditions to trap fish owls.

The pattern of no owls, poor sleep, second-guessing, and general stagnation continued on for more than a week. I felt trapped, more so knowing that we really were trapped. Even if we wanted to throw up our hands, leave, and start fresh as we had when we left Serebryanka, we could not: our truck was still stuck in the snow a kilometer and a half away. I tried changing my outlook. We’d still made some progress this year, even if we hadn’t caught any owls. It had been arrogant of me to think we could stroll up to some of the least-studied birds in Northeast Asia and assume they’d hand us their secrets.


It was right around this time, when I’d come to terms with our failures, that we caught our first owl. Anatoliy slapped me on the shoulder and told me he knew it all along—all I had needed to do was change my attitude. But in reality, we’d improved our trap. Up until this capture, we’d placed our noose carpets along the riverbank in areas we hoped the owls would land, which was inefficient. Our modification, something novel enough that we were able to later publish a description of it in a scientific journal, coaxed the owls to land where we wanted them to. We created a prey enclosure: an open-top mesh box about a meter long and thirteen centimeters tall, constructed from material left over from our noose carpets. We placed the box in shallow water no more than ten centimeters deep, sprinkled the bottom with pebbles so that from above it looked like any other stretch of river, and then filled it with as many fish as we could catch—usually fifteen or twenty salmon smolt. Then we set a single noose carpet on the closest part of the riverbank. The owl would see the fish, approach for a closer look, and get caught.

Masu salmon, the species most common in these rivers at this time of year, are among the smallest of all salmon. Full-sized individuals reach about half a meter in length and weigh about two kilograms, or more than half the weight of an adult fish owl. The masu have the most constricted range of any Pacific salmon, largely confined to the Sea of Japan, around the island of Sakhalin, and in western Kamchatka. Like many salmon, juvenile masu spend several years in freshwater systems before migrating to the sea, and the coastal rivers of Primorye are full of these pencil-length fish. As a result, this abundant species is a critical resource for fish owls in winter. Masu are also an important food source for local villagers, who can catch scores of them in a leisurely day of ice fishing. There is a misconception among locals that the small masu found in winter—which they call pestrushka— are a different species entirely from the larger fish—called sima— that come in summer to spawn. This complicates management of this species, as the same person who recognizes the commercial and ecological importance of sima may view the pestrushka as a common species that can be exploited.

The second night after we arranged this trap configuration, the male fish owl of the Faata River pair approached the enclosure and ate half the salmon inside before stumbling onto the noose carpet on the bank and engaging the trap transmitter. We were eating dinner by kerosene lantern light, as the hydroelectric plant no longer generated electricity, when it sounded. Despite nothing but false alarms so far, we treated every trigger with dead seriousness. Sergey and I stared for a second at the receiver and its regular, confident beeps, then locked eyes and flew out the door in a tumult of down jackets, hip waders, and uninhibited urgency.

We approached the trap, a few hundred meters away, on skis. Up ahead I saw Sergey’s spotlight reveal a fish owl sitting on the bank, watching us. Like one of Jim Henson’s darker creations, this was a goblin bird with mottled brown feathers puffed out, back hunched, and ear tufts erect and menacing. I’d seen other owl species adopt this posture in order to look bigger and more threatening to an aggressor, and it was working: this was a creature braced for battle. I was taken aback, as I still am every time I see one of these birds, by how enormous it was. The beast stood immobile, glaring at us with yellow eyes in the winter dark and illuminated unevenly by Sergey’s light as our pace quickened. Everything was silent except for the rhythmic friction of skis on snow and our gasps of exhaustion. The urgency to reach the owl before it freed itself was palpable.

My heart stopped as the fish owl pivoted and took to the air in retreat, but the weight of the noose carpet held and drew the bird softly back to ground. The huge owl moved away from us with awkward bounds along the broad, snowy bank, dragging the noose carpet with it, until finally, when we were only meters away, the raptor spun onto its back on the river’s edge. It lay there facing us, talons extended and agape, ready to shred any flesh within striking distance.

In the off-season, I’d trained in raptor handling at The Raptor Center at the University of Minnesota and had learned that hesitation with a defensive raptor doesn’t do anyone any good. I swooped my arm in a fluid motion the moment I was within reach, scooping the bird up by its extended legs. Upside down and confused, the owl relaxed its wings, and I used my free arm to tuck them first against its body and then the body against me as though holding a swaddled newborn child. The owl was ours.