Munu, an endangered black rhinoceros, needs to be watched 24/7. Thermal cameras do the job. 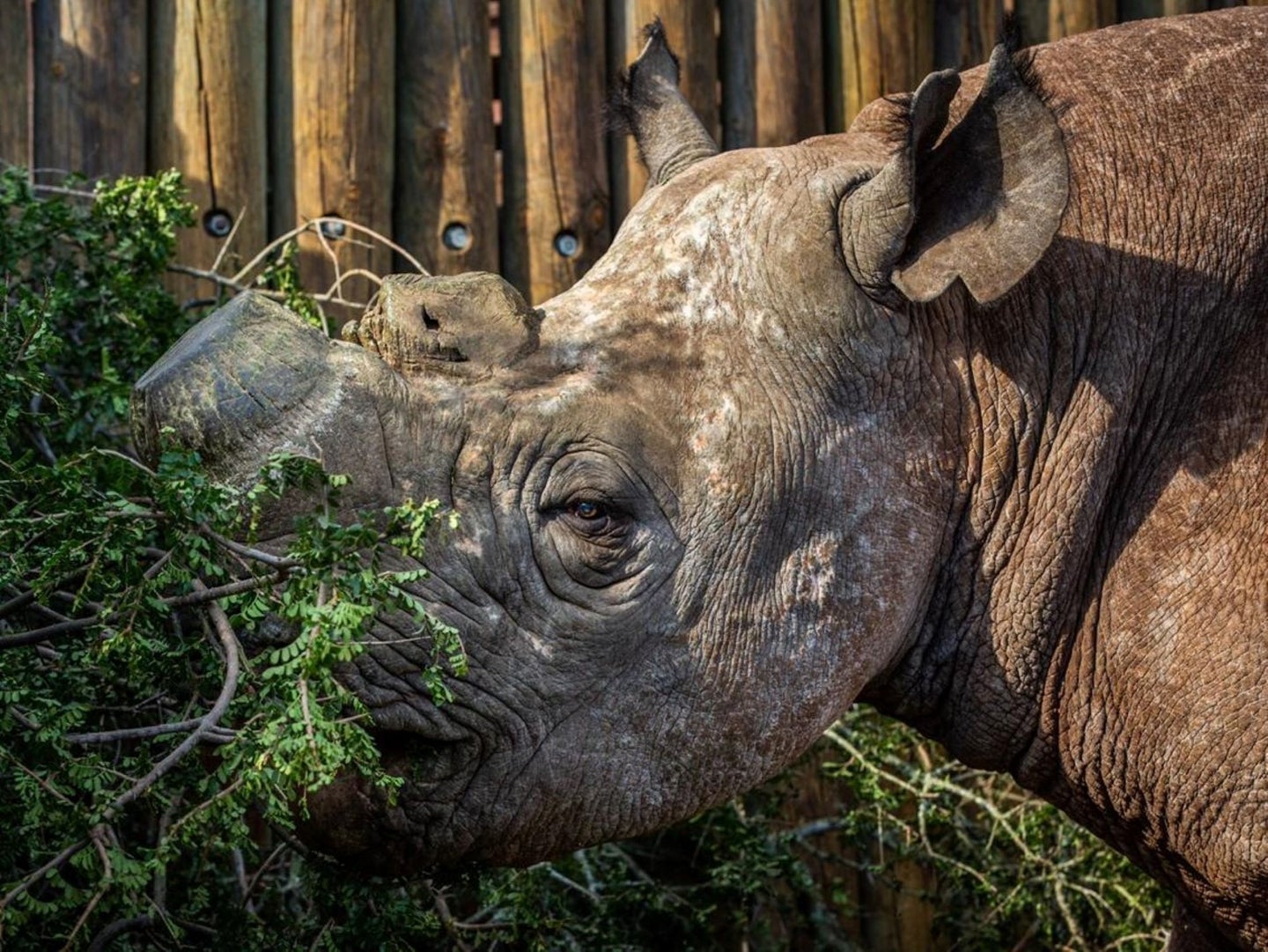 Munu, a blind black rhino in South Africa, is protected with a series of thermal security cameras. Kyle Torrens
SHARE

When conservationist and White Lion Foundation director Brett Barlow took in a blind black rhinoceros that had been found wandering through the South African bush in 2019, he did so knowing that the animal would need heavy protection. Black rhinos are a heavily poached species due to their horns, which can be sold for more than $65,000 per kilogram as a supposed medicinal ingredient or carving material on black markets. What’s more, the animal’s blindness rendered him unable to defend himself in the harsh, dry savanna. So Barlow had the rhino, now known as Munu, move into the South African eco-lodge where he lived, then went looking for a high-tech security system to protect the new resident.

Barlow, collaborated with FLIR Systems, a producer of thermal-camera technology, based in Wilsonville, Oregon, to set up a security system in the area around Munu’s enclosure to help protect him from poachers. Black rhinos have faced staggering losses in South Africa: The population fell from about 65,000 adults in the 1970s to fewer than 6,000 in 2018. Munu’s subspecies, the south-western black rhino, is currently classified as near-threatened by the International Union for Conservation of Nature—and in general his species is considered critically endangered. In the last decade, however, conservation efforts have ramped up with relocation of black rhino communities to new areas to encourage their productivity and reproduction and increased law enforcement around the animals.

So far, 2020 is looking up for black rhinos in South Africa, with poaching activity logging lower than usual due to a national COVID-19 lockdown. But Barlow, who’s been working with black rhinos for more than 30 years, believes the economic fallout of the pandemic may cause an increase in poaching activity later when people need to find new means to support their families. Munu’s case is particularly dangerous, too, as he faces threats from more than just poachers—larger white rhinos will sometimes approach his pen, and when they do, security personnel need to be able to step in to prevent harm. The FLIR thermal cameras, Barlow says, could be an invaluable tool for protecting Munu and the other animals in his care.

“We have to do everything in our power to look after him,” he says. “That’s why we’ve always said that FLIR is, in essence, his eyes.”

Because most poachers go out at night, park rangers and wildlife keepers often have difficulty identifying them. The FLIR cameras used in and around Munu’s boma, or pen, consist of a combination of thermal, vision, and thermal-vision hybrid units that can provide a complete picture of the animal in pitch darkness or full daylight. They’re also a good stand-in for CCTV camera feeds during rainy or misty weather conditions.

“Our eyes see a fairly narrow band of wavelengths of energy on the electromagnetic spectrum, and the thermal cameras see a longer wavelength that is essentially heat,” says Shawn Jepson, a global solutions architect and program manager at FLIR Systems. “What you gain from that is it doesn’t matter what the light levels are, if you have artificial lighting, if there’s inclement weather—the camera can still create an image.”

In total, there are 24 solar-powered cameras set up around Munu’s boma. That includes a 360-degree, 2.1 megapixel camera unit placed inside the enclosure itself and six optical cameras with 1080p video resolution that will eventually record a livestream for the public. FLIR also built a special camera unit that combines thermal sensors and optical lenses and can trigger an alarm if someone is found approaching the enclosure. The company is also testing six small thermal cameras on the property that use an algorithm to distinguish human and vehicle motion from other types of movement in video clips.

Overall, the new security system keeps Munu safe with fewer armed security guards. Other conservationists in Barlow’s area may need to have 30 to 40 security guards on staff to make sure that the animals are constantly protected. But Barlow employs far fewer guards, thanks to the thermal tools at his disposal, and still believes Munu and the other animals are just as well protected—if not better.

The use of thermal camera networks to deter poachers isn’t necessarily new. The World Wildlife Fund (WWF) has been testing and deploying the technology with international conservation projects since 2015. Last year, the organization partnered with the Kenyan government to install FLIR cameras in 11 national parks, encompassing 80 percent of the country’s black rhino population, says Colby Loucks, head of the WWF’s Wildlife Crime Technology Project. The extra layer of security has helped drive down poaching rates: This year, Loucks says no rhinos have been hunted by humans in Kenya.

With the rhino-conservation initiative in east Africa, the thermal technology assists rangers in three ways. The first is a set of thermal binoculars, which rangers can bring with them on patrols to scan for people approaching animals in the parks. Thermal cameras can also be attached to vehicles, so that as rangers go out on their patrols, they’re able to easily identify and pursue poachers. And the final way is similar to how the cameras are used in and around Munu’s boma in South Africa.

The cameras could also help curb the loss of human life. Between 2012 and 2018, 269 rangers in African countries have been killed on the job, mostly by poachers, including 12 in the Democratic Republic of Congo this past April. “What became apparent quite quickly is that this technology also protects rangers,” Loucks says. The technology allows park staff to see where the poachers are and what weapons they’re carrying and decide how to respond safely and strategically.

More surprisingly, the technology can protect the lives of poachers as well by preventing them from engaging in illegal exploits, Loucks says. Between 2010 and 2015, an estimated 150 to 200 poachers were arrested or killed in South Africa’s Kruger National Park. Word gets around when rangers have this technology, and Loucks and Barlow believe that when poachers know that the rhinos in an area are heavily protected, they stay away.

Thermal camera technology has other conservation purposes, too. In North America, FLIR’s gadgets are helping to count black-footed ferrets, an endangered, nocturnal species that’s been notoriously difficult to quantify. The cameras can also be used to document the behavior of nocturnal carnivores without disturbing them with beams of light.

In the midst of a global pandemic that’s made conservation efforts far more difficult, thermal camera technology has helped protect animals who may not have been able to survive on their own. This, Barlow says, is the most important piece of his mission.

“The only way to save a species,” he says ,”is to begin by saving individuals like Munu.”

Correction: While WWF did start working with thermal cameras in Kenyan national parks in 2015, they only started testing the FLIR’s technology more widely last year. The story has been updated to reflect that.