Temperature tells honey bees what time it is 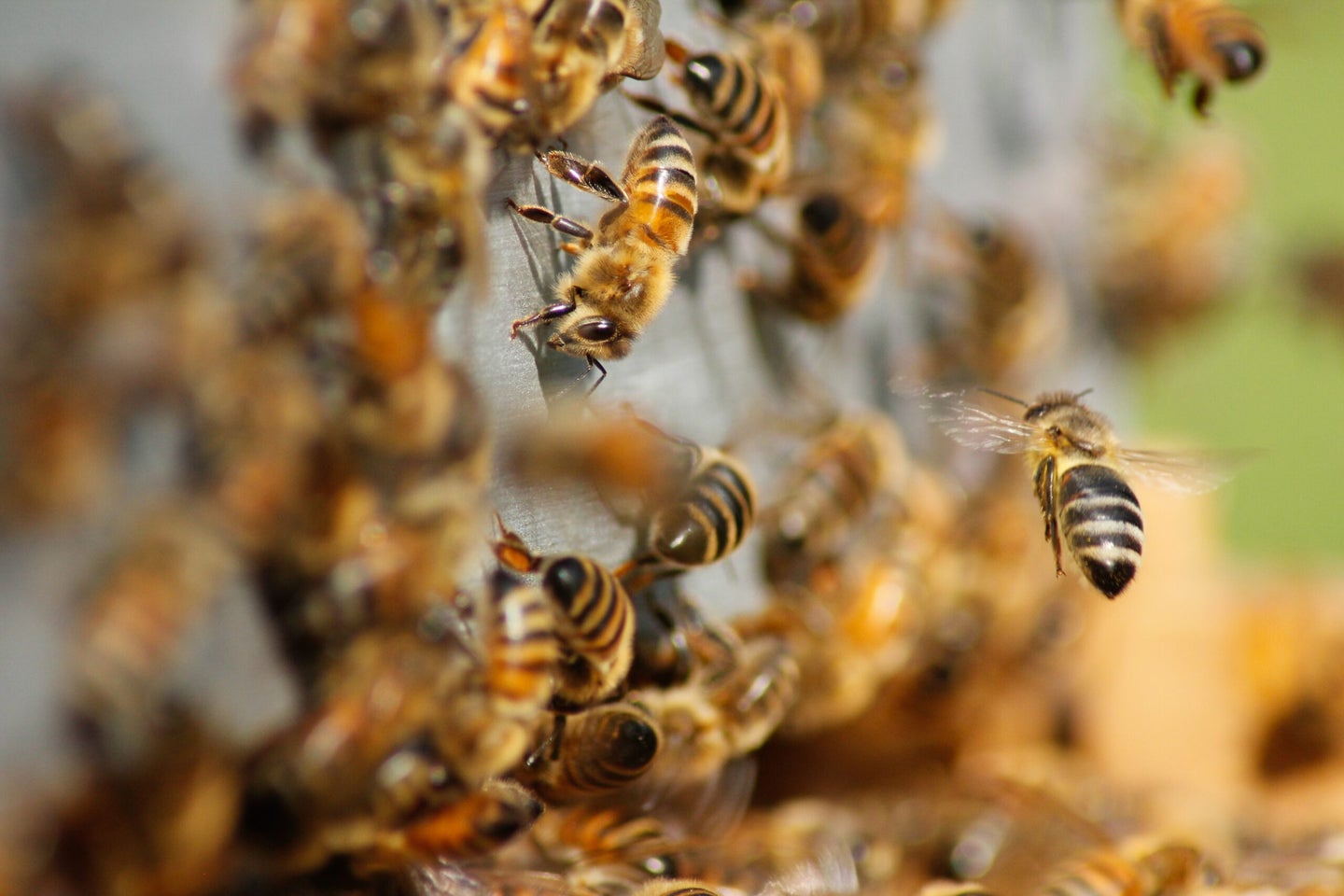 “The first record of us suspecting this goes back to the 1900s,” says Manuel Giannoni-Guzmàn, a neuroscientist at Vanderbilt University who studies the sense of time. “There was a German psychiatrist who would sit out in his garden, having breakfast. And bees would come every single day, and they were coming to get his jam. He noticed that bees were coming even on days where he didn’t have any food.”

What’s less clear is how they do it. Bees are highly social animals, with a variety of different jobs. Some foraging bees leave the hive every day, while others live most of their lives in the dark, warm interior. And yet they all appear to work off of the same clock. According to new research led by Giannoni-Guzmàn, that’s in part because bees keep time using the temperature of the hive itself.

After that first record of bee schedules, entomologists learned that time-keeping was a critical part of how bees gather food. Flowers aren’t just pumping out nectar constantly—some might ramp up their juice in the mornings, while others get sweet in the afternoon.

“If you’re a honeybee, you can go to every single flower, and spend a lot of energy, and maybe get a bit of nectar if you get lucky and hit that time when a flower is open,” says Giannoni-Guzmàn. “But the other thing you can do is learn what time of day those flowers are producing the most nectar and capitalize on that.”

And the internal clock isn’t just for scheduling: bees use the location of the sun to navigate from flower to flower, and to do so, they need to know the time of day. Famously, worker bees even share the locations of primo food sources using what’s called a “waggle dance,” a series of dance steps that map out a flight path based on the location of the sun. The dancer has such a keen clock that, as time passes, it updates its dance to account for the sun’s movement.

The circadian clock is so critical that it may even be at the center of the biodiversity crisis. Research from last year suggested that neonicotinoids, a common class of pesticide linked to pollinator declines, disrupt bees’ internal clocks and disrupt their foraging and sleep. (Giannoni-Guzmàn was also an author on that study.)

The question is: what sets the clock? The obvious answer would be daylight, but that’s not the full story.

Deep inside the hive, there’s very little light, and yet the bees that live in there operate on the same beat as their sisters that venture into the outside world.

“It’s well established that light is not the only cue that entrains the clock,” says Guy Bloch, who studies the evolution and mechanisms of insect social behavior at Hebrew University of Jerusalem. His work has previously suggested that bees also use social cues to sync up, or “entrain” their circadian rhythms: bees at the center of the hive respond to the vibrations and even respiration of the foragers. “This is one of the things that makes temperature entrainment more interesting. The other thing is that the honeybee colony was thought to be a very stable environment.”

[Related: How to save the bees without becoming a beekeeper]

Bees carefully regulate the internal temperature of a hive at about 95 degrees Fahrenheit, and just a few degrees difference can lead to developmental problems in larvae. But, the new research shows, the outer chambers of a nest do fluctuate.

Most of the experiments were conducted between 2012 and 2015, when Giannoni-Guzmàn was a graduate student at the University of Puerto Rico. There, he and several coauthors embedded temperature monitors in the hives. Inside, they found not only temperature cycles, but cycles that didn’t always match the outside air, suggesting that the bees were creating their own daily rhythm.

From there, they threw individual forager bees into a new temperature cycle, by shifting the peaks and valleys back by about 6 hours—a bit like thermal jet-lag. The challenge, Giannoni-Guzmàn says, was quantifying that change. “Going through 18 months of temperature data was a very complicated task, and we didn’t have the software tools to do good quantifications until very recently. The pandemic forced us to go in and say, we have all of this data, how can we visualize it?”

Revisiting the dataset five years later, the team could see that many of the bees had adapted to the new schedule, becoming active in the heat, and sleeping in the cold. But about half didn’t respond at all, and just kept sleeping and waking as they had before. It may be that the temperature swings weren’t strong enough for some of the bees, or that they just didn’t have enough time to adapt.

The study only looked at foraging bees, but Giannoni-Guzmàn says that he wants to investigate whether nurse bees are also subject to temperature fluctuations as they move through the nest.

That potential variability, Bloch says, speaks to how little we still know about bee social lives and their clocks. “We know that social organizations are important, we now know that temperature is important for the foragers. And we know that sunlight is important. And the question is to try to understand the relationship between all these factors.”

“It has a lot of implications for other systems—it tells us something about the interplay between social factors and the circadian clock, about which we know almost nothing. But it’s a frontier.”