And why you should probably leave most baby squirrels alone. 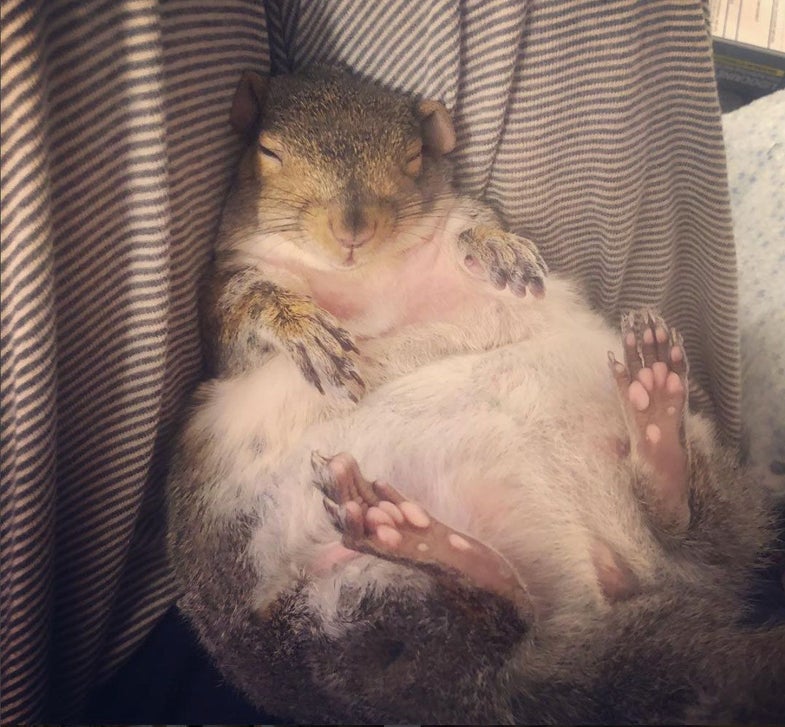 Unable to bear the thought of euthanizing a perfectly healthy squirrel, a pair of animal rescuers kept the docile squirrel. Christina and Michael
SHARE

Wildlife rehabilitators Christina and Michael are used to strange calls. But this one was especially unusual. A man had come home to his tenth floor apartment to a pile of leaves and twigs on his bed. Looking closer, he realized it was a nest with a pair of just-born baby squirrels curled up inside. Christina guesses that the original nest was destroyed, and needing a safe place to give birth, a very pregnant squirrel scrambled through the apartment’s open window. The rehabbers tried to reunite the babies with the mother, who kept racing back to the apartment with more nesting material, but she wouldn’t take them. And she had a good reason not to. “Even if we could have reunited them, there was very little chance the mom could keep them warm because there was no nest,” says Christina. “The two babies would absolutely have died, so we had to intervene and take them.” Unfortunately, one of the babies didn’t make it, but Thumbelina—the now two-year-old Eastern grey squirrel who lives with Christina and Michael—survived. In New York, where they are based, it’s illegal to own a squirrel (the rehabbers last names have been withheld from the story for this reason). If the state’s conservation department found out about Thumbelina, she could be confiscated; this usually ends with putting an animal down or releasing them into the wild, which in Thumbelina’s case, would be a death sentence. That’s because Thumbelina isn’t a regular squirrel. All baby squirrels are born deaf and blind, normally opening their eyes at around five weeks old—Thumbelina developed much later, and didn’t open her eyes for nine weeks. Whether she was born this way or affected by the early trauma, she lacked basic squirrel survival skills like climbing and jumping, and in general, didn’t really behave like a squirrel at all. Afraid of heights, her endless searches for avocado (her favorite food) are done from the safety of the kitchen floor. The closest she’ll get to the outdoors—which also terrifies her—is the windowsill, her napping spot of choice. She also likes massages, and eating seeds gently from Christina’s mouth (don’t try this at home: any other squirrel will probably bite your face off).

Every wildlife rehabilitator’s goal is to introduce animals back into their natural habitat. But sometimes due to illness, injury, or, as in Thumbelina’s case, a deficit of squirrel skills, an animal is deemed non-releasable. If that happens, rehabbers are obligated to put the animal down. Unable to bear the thought of euthanizing a perfectly healthy—albeit slightly slow—squirrel, Christina and Michael decided to keep her.

“There are people who think if the animal can’t survive outside it should be put down, and we decided that wasn’t going to be an option,” says Michael. “There’s nothing wrong with her, she’s just different.”

Thumbelinas of the squirrel-rescue world—ones that are perfectly content with domestic life—are rare. For the most part, squirrels make terrible pets. We learned this the hard way. In the 1700s, pet squirrels were all the rage. When Mungo, the pet squirrel of one of Benjamin Franklin’s good friends, got loose and was killed by a dog, Franklin wrote: “I lament with you most sincerely the unfortunate End of poor Mungo: Few squirrels were better accomplish’d; for he had a good Education, had travell’d far, and seen much of the World.”

But by the 20th century, people realized squirrels made horrible housemates. They are extremely active creatures who live to run, jump, climb, and conduct all sorts of other bushy-tailed business. They are also territorial, and do not like sharing spaces—especially confined ones indoors. And, on top of destroying your entire home out of sheer boredom, squirrels can also become aggressive and attack whoever invades their space.

Unfortunately, the number of squirrels ending up indoors is far higher than it should be. That’s because people see baby squirrels as helpless or in danger when that’s rarely the case. Jenny Topolski, a rehabber with Urban Utopia Wildlife Rehabilitation in New York, says the majority of calls she gets are from people finding what they think are orphaned baby squirrels. They call rescuers who come take the baby squirrel, but most of the time the growing animal is just exploring new areas.

“Just because a baby animal is alone doesn’t mean it’s in trouble,” she says. “Moms leave them alone a lot of the time—that’s part of their survival strategy. If you see babies and they look healthy, they’re probably fine.”

It’s a lot of work rearing baby squirrels, especially if they can’t be reunited with the mother. Just born babies must be fed every few hours, and constantly monitored for infection. Like kittens, they also can’t go to the bathroom without help, and have to be stimulated after each feeding to pee and poop. Once the squirrels reach about 14 weeks, they are ready to start venturing into the outdoors, but they can’t just be let go. They have to be moved to an outdoor enclosure, and then just as a mother squirrel would do, introduced into their new environment bit by bit.

This is even more tricky when you live in a cramped New York City apartment. Since there’s only one official rehabilitation center in the city, the majority of wildlife rescue is done on a volunteer basis. Local rehabber Arina Hinzen says she rescues about 75 squirrels per year, and during busy breeding periods in the summer and spring, juggles up to 40 animals at a time.

“It’s the hardest thing to say no, but we’re so overwhelmed we have to send people to Westchester County or Long Island to get help,” she says. “We have a lot of sleepless nights.”

And Hinzen says global warming has made her job more difficult as squirrel breeding seasons get longer each year.

“The spring season used to start in March, but now we’re getting babies in February,” Hinzen says. “We’re really seeing the impact of climate change with the seasons going way longer. The first year it happened we thought it was just an odd thing, but it turns out it’s not. We still get small babies in October, when the season should be over at the beginning of September.”

Not only does this turn Hinzen’s seasonal work into an almost year-round job, but she says it also means squirrels can’t be let go when they need to be. They can’t be released in November because they don’t have time to squirrel away enough food to last through the winter. Hinzen now has to send rehabilitated animals to “winter camp” upstate, and will then be released the following spring.

It’s also a struggle for volunteer rehabbers like Christina and Michael, who have to coordinate baby squirrel care (plus looking after their secret roommate Thumbelina) around their day jobs. Sometimes the job is quick, and they’re able to reunite babies with their mothers. Other times it’s too late, and they have to rear the babies themselves. It’s all part of the job as a wildlife rehabilitator, but when burdened with babies that shouldn’t have been orphaned in the first place—on top of caring for sick, injured, and truly orphaned squirrels—the job quickly becomes overwhelming.

Rehabbers are trained to intervene when they have absolutely no other option. But we’re not. As hard as it may be to not scoop up a baby squirrel and rush it to the nearest wildlife rescuer, it’s probably best for both the animal and the overworked volunteer to take a step back and let nature do its thing.