Researchers developed a sensor to detect blood in the stomach. 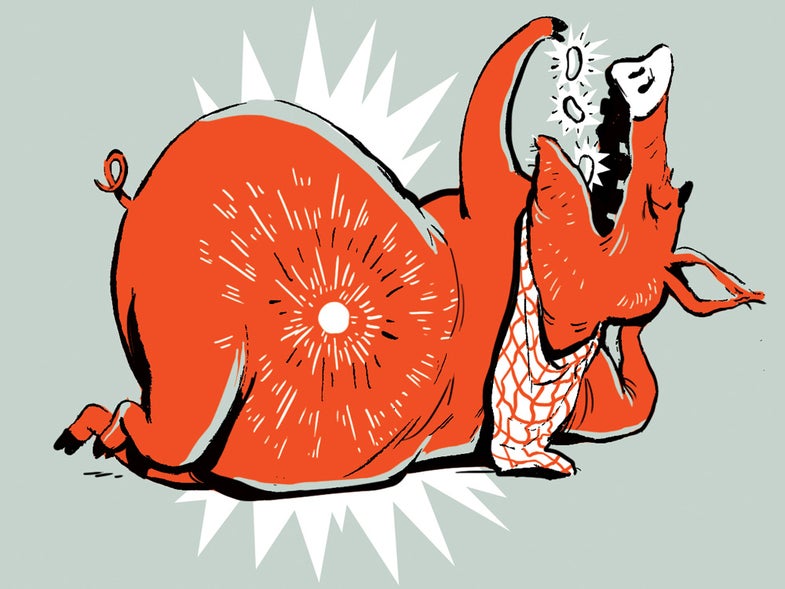 From Mark Mimee, microbiologist at Massachusetts Institute of Technology

I genetically modify bacteria that live in our guts. In 2012, I decided to turn these microbes into living sensors, small enough to fit inside the body, by altering them to produce low levels of light when they detect blood. This could help patients at high risk of internal hemorrhaging. I paired up with an electrical engineer to build an ingestible 1.4-inch-long capsule that could sense the faint light and transmit a signal to a cellphone.

Once we got the sensor working in a tube of fluid, we needed to test it inside a real stomach. We used six Yorkshire pigs because their gastrointestinal tracts are comparable to humans’. But you can’t just ask an animal to swallow a giant pill. So we sedated the pigs and threaded tubes down their throats to feed them the capsules.

I’m used to working in the controlled environment of a lab—we knew exactly what was in those tubes of fluid. But with the pigs, we were throwing the capsules into a black box. If the subject ate that morning, its stomach might be full of gastric fluid. If it didn’t, and it was lying on its back, the gut contents didn’t slosh around as usual, so parts of the stomach got dry. A few times, we deposited the sensors right in a dry patch. With no data to transmit, those experiments failed. Eventually, we hope to use this pill to better manage gut-related diseases in humans. So scaling up from a test tube to a 150-pound pig showed us how much can change in a live subject.

As told to Lexi Krupp