Wasps, oak trees, and a creepy vine are involved in a parasitic Florida love triangle 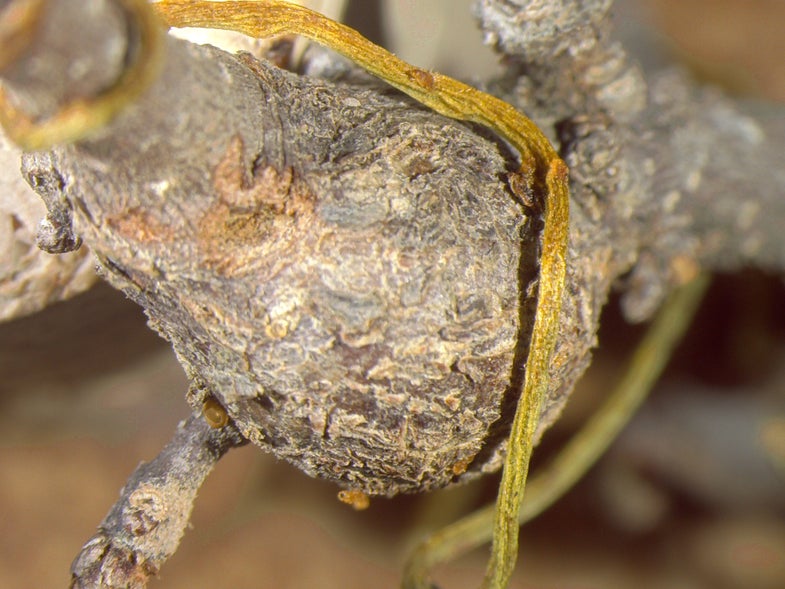 Karma exists, at least for gall wasps. These little bugs deposit their larvae in trees so their young can leech off of the plant’s nutrients. But it turns out a parasitic vine mooches off of the parasitic wasps in turn.

This finding, published on Monday in the journal Current Biology, isn’t great news for oak trees—it’s not like the parasitic vines in question will save them from a terrible fate at the stingers of parasitic wasps. Researchers from Rice University were in southern Florida studying how gall wasps interact with their arboreal hosts when they accidentally discovered the so-called love vine attaches to the galls—which is part of the tree, not part of the wasp. It’s the first time anyone has described a parasitic plant attacking a gall like this.

But let’s back up a second first and talk about what the heck a gall is.

Gall wasps, like gall midges and gall flies, lay their eggs inside growing oaks to take advantage of the trees’ ability to form a little tumor-like structure when something irritates them. The wasp larvae then develop inside the oaks, where they form little embryonic sacs from which to pull in nutrients from the rest of the tree. That’s a gall. They’re highly structured little balls controlled by the wasp, not by the tree.

Some oaks also have another parasite: the love vine, Cassytha filiformis. The love vine is an obligate parasite, which means it cannot survive on its own and instead must attach itself to another plant. Love vines don’t have significant leaves, can’t physically support themselves, nor can they collect their own water or nutrition. Instead, they infiltrate woody trees and bushes, extending their creepers into interior tissues where they can suck out nutrients and water for their own use. These growths are called haustoria, which are a bit like root systems. Many plants can support a love vine without dying, but if the vine grows too fast for too long it can kill the host.

The researchers who made this discovery were originally just studying the Belonocnema treatae species of gall wasp, but in doing so found a bunch of galls with haustoria attached. So they went back out to the field and collected more. The galls that got attacked by the vine tended to be about 35 percent larger than average, but the wasps inside didn’t survive as well, suggesting the love vine was stealing resources away from the growing larvae. Despite having more nutrients inside the larger galls, a higher percentage of the attacked galls had dead wasps inside—45 percent versus just 2 percent of the un-attacked galls

And the vine doesn’t seem to be doing this accidentally. Love vines usually grow on stems, buds, and on the tops or sides of leaves. But gall wasps create galls almost exclusively on the underside of leaves. The fact that the researchers found vines attached to galls suggests that the vine was somehow able to seek them out, since it’s unlikely that they would have had a chance encounter.

The scientists went back to look more closely after they realized what they’d found and discovered that love vines also prey on another, less common type of gall wasp, plus five other gall-forming species of wasp and fly.

If biologists who have been studying galls for decades could have missed this, who knows how many other parasitic interactions we’ve been blissfully unaware of. The researchers note that there are 13,000 species that form galls and 4,500 species of parasitic plants. Both types of creatures live all over the world. That’s a lot of potential overlap. Hopefully there’s plenty more parasite-on-parasite action to come.