Hurricane Florence is coming. Here’s what you need to know.

This is not a storm to take lightly. 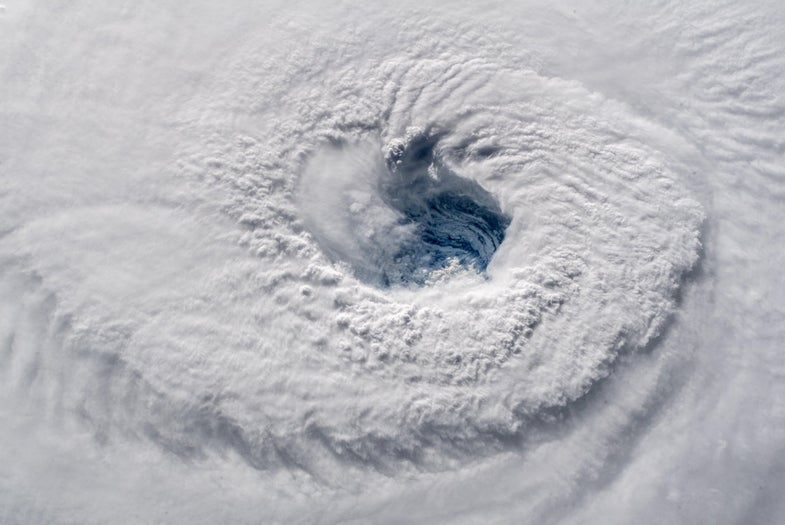 After a relatively calm start to the 2018 hurricane season, Hurricane Florence is set to slam into the East Coast over the next few days. Florence is a serious storm that warrants the attention of everyone near its path. Here’s what you need to know:

Where and when will Florence hit?

As of Thursday morning, the National Hurricane Center (NHC) forecast showed Florence already subjecting the North Carolina coast to tropical-storm-force winds. The storm will hover close to the coast, slowly moving its way southeast and making landfall as early as late Thursday. Florence is now a Category 2 hurricane—weaker than it was yesterday—but this storm is extremely dangerous. Hurricane-force winds will hit the Carolinas late Thursday or early Friday, and storm surge—rapid sea level rise due to atmospheric changes—is already happening.

The current track has the storm moving down the coast toward South Carolina, which is highly unusual and may catch residents unprepared. Forecasts past that point are still iffy, but as meteorologist Eric Holthaus tweeted on Wednesday, it is becoming increasingly likely that South Carolina (and possibly even southeast Georgia) will see dangerous wind and rain.

Over the past day or so, a blend of the best weather models (left) has latched on to the idea that Hurricane #Florence may strafe the coast of the Carolinas for 2-3 days before moving inland.

This morning's blend of the best models (right) continues to stick with that idea. pic.twitter.com/BuJgxZs2y2

Everyone in the Southeast U.S. should be keeping an eye on forecasts in the coming days, but residents in The Carolinas must prepare for life-threatening conditions, even if you live inland. CNN reports that nearly 2 million people are under mandatory evacuation orders in the Carolinas and Virginia. States of emergency were also declared in Georgia and Maryland. Check your local government website for evacuation info, and get out now if that’s what your local officials are recommending. Because the storm is tracking down the coast, areas previously thought safe may now have evacuation orders.

Remember: A hurricane warning means hurricane-force winds are expected to hit your area. These are usually issued 36 hours ahead of the arrival of tropical-storm-force winds, as those conditions can make it difficult to prep for even worse weather. In the event of a warning, you should immediately wrap up your preparations and leave the area or seek shelter—follow the advice of your local officials. You might also receive a storm surge warning, which means your area is in danger of life-threatening inundation within 36 hours.

A hurricane watch means that hurricane conditions are possible within your area. These are issued 48 hours ahead of tropical-storm-force winds. During a watch, you should prep for the worst and keep an eye on local forecasts and government instructions.

Why Florence is so dangerous

A Thursday morning update from NHC warned of life-threatening storm surges, flash flooding, and hurricane-force winds in both North and South Carolina. Some tornadoes are possible in Virginia and North Carolina on Thursday and Friday. There is risk of deadly surf along the coasts, and the risk of flash flooding extends far inland and to several states in the region (check for updates here). Even if you don’t live right on the coast, storm surges and rainfall could be extreme enough to cause flooding in your area. The NHC is forecasting storm surges greater than 9 feet in some coastal areas. This kind of flooding can be difficult to visualize, so if your area is receiving any storm surge warnings, you should watch this visualization to understand what you’re up against:

The latest iteration of our IMR group's work. This is what storm surge looks like. #Florence will make landfall in the next 36-48 hours and bring with it, 6-9 feet of potential storm surge. @parkertwc will show you what that looks like. @LocalNow @weatherchannel #NCwx #SCwx pic.twitter.com/mG9JjOOJeM

Florence is particularly troubling because the storm is set to stall out off the coast of North Carolina, which means folks on the coast could be subjected to the full force of the storm for a full day. In that sense, the hurricane is reminiscent of Hurricane Harvey, which stayed put over Texas long enough to cause record-breaking flooding last year.

A live video stream from the Frying Pan Tower, which is 39 miles off the coast of NC, already showed harrowing wind and surging, churning surf on Thursday morning:

If you are anywhere Florence’s path, take heed: this is not a case of an over-hyped weather event. This hurricane will be intense, and it may stick around long enough to do incredible damage. You don’t need to live on the coast or right in the storm’s direct path to be in serious peril.

What should I do?

Check forecasts diligently over the next couple of days. If you’re evacuating, make sure you’ve taken precautions to protect your pets and personal belongings as best you can. If you’re staying put—even those clear of evacuation zones might be in for a serious storm—stock up on a few days’ worth of supplies. Try to get a gallon of water per person per day, and get a real flashlight. Because cell phones come with a flashlight capability, many folks no longer have battery-operated devices at home. You do not want your ability to see to depend on the battery life of your smartphone, especially when you’ll want to save that juice for emergencies. Power companies say outages could affect millions and potentially last for weeks. You can read more of our hurricane preparedness tips here.