They found some nanoscale clues on the hues. 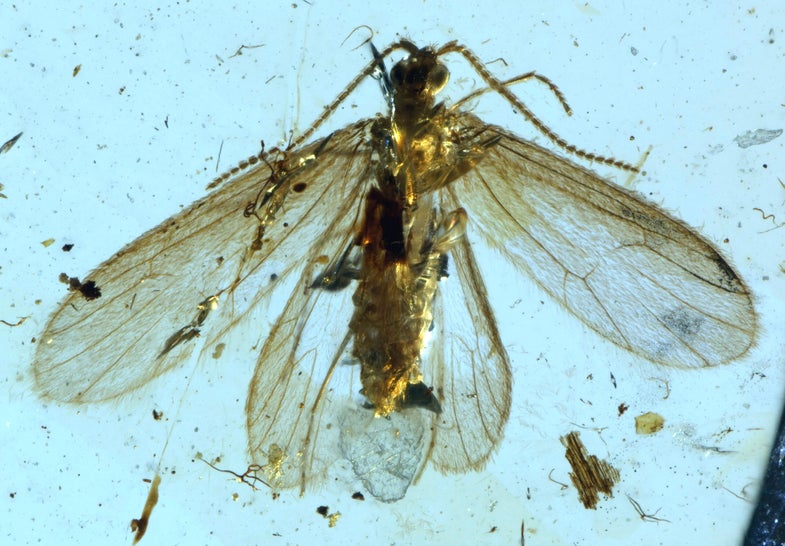 The blue morpho butterfly is arguably the most glamorous insect on the planet, and you’d know instantly if you saw one. Spanning wider than your hand, its wings flash an iridescent blue sheen so bright it seems to glow.

And in some sense, the blue morpho does glow: not by emitting light, but by refracting it, thanks to an optical trick that evolved in butterflies, along with some other insects, plants, birds, and mollusks. And according to new research from the Chinese Academy of Sciences, butterflies started displaying these flashy colors a long, long time ago.

The blue morpho belongs to a group called lepidoptera that includes butterflies and moths, notable among insects for their widely varied and highly inventive wing patterns. Their stylings range from dull colors to patterns mimicking eyes, drops of water, leaves, wasps, other poisonous butterflies, and even those painted with shades of cellophane and oil slick. And scientists want to know how far back in time those hues stretch. “Colors are the basis for diverse communication strategies,” says Bo Wang, an author on the new study, out today in Science Advances. “If we know the colors of ancient insects or other animals, we can get more information about their ecology.”

Back to the morpho’s brilliant blue. It is due to something called “structural color.” Instead of a pigment that chemically scatters specific wavelengths of light, structural colors are physical, crystalline arrangements that refract light, as though through a prism. With features smaller than a quarter of a wavelength of light, these structures are invisible to the naked eye, made of stacks of highly refractive, colorless material like collagen or keratin or even layers of pigment like melanin. In lepidoptera, the tough, chitinous scales of the wings themselves exhibit intricate ridges and layers that can conjure vivid, metallic hues from light. But the same principle is at work in the feathers of a peacock’s tail, the scrotum of a vervet monkey, and the shiny green shell of an invasive Japanese beetle.

Nipam Patel, a researcher at UC Berkeley who studies how structural color develops on modern butterfly wings, has catalogued the sheer variation of these structures: “They can be as simple as a flat layer of the right thickness or a very complicated, Christmas-tree shape,” like the cross section of a blue morpho wing scale. “Sometimes you get what seem like really complicated solutions that arose independently,” he explained, with the same nanostructure exhibited by distantly related groups, evidence that structural color is a useful tool that lepidoptera have evolved again and again over millions of years.

In the new study, researchers examined more than 500 butterfly specimens, ultimately selecting six that were well preserved enough to reveal their secrets. The specimens date to the Jurassic period, as much as 200 million years ago. Fossilized in stone—and in the case of one proto-butterfly, preserved in amber à la Jurassic Park—the colors of the wings are gone, but their nanostructure is preserved. The scientists examined these scaffolds under an electron microscope to reveal their pattern; a lower level of small, tightly packed scales and an upper layer with larger segments ridged in a herringbone pattern. Modeling these arrangements in a computer, the researchers were able to determine how they would have scattered light, which in turn revealed what color they would have been.

In all of the six specimens, the wings exhibited a broad-band scattering which would have appeared as a light tawny brown with a metallic, soap-bubble sheen. To the researchers, their finding indicates a pattern of wing scales that has been an integral part of the lepidoptera family from its earliest forms. Only later, during the Cretaceous period, did this single structural formation explode into the full range of optical illusions butterflies and moths would eventually develop.

Though all of the Jurassic specimens belong to families and species long extinct, their closest living relative is a kind of primitive moth today called micropterigidae. They are small and furred, with wings a brassy greenish-gold that could also be described as kind of brown. The blue morpho they are not. But from this humble beginning, the trippy patterns and intense colors of today have sprung.