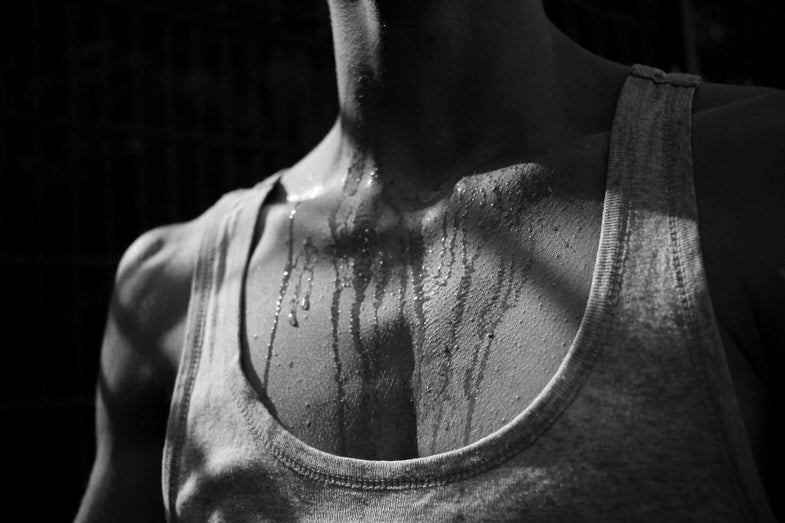 Fact: The more fit you are, the more you might sweat during exercise

Sweat gets a bad rap. In today’s society, profusely sweating upon the sight of the sun or within five minutes of working out doesn’t usually, or ever, garner the jealousy or envy from bystanders in the same way someone with oversized muscles or six pack abs does. But why not?

With August’s heat in full swing, in this episode, I sought to answer a suspicion I’ve had for sometime: That being more physically fit might actually make you sweat more. In doing so, I also make the case for praising sweat. This physiological adaptation is the most effective method we have for keeping our body temperatures from rising to dangerous levels either during while we are exercising, lounging at the beach, simply walking outside on a summer’s day.

There are many factors that determine how much one individual sweats, and, like any other human trait, there are some people that simply sweat more than others. On average, men tend to sweat more than women. Scientists figured this out by putting a similar group of fit men and women on a stationary bike for the same amount of time and effort. The researchers measured the number of sweat glands that were active and how much sweat each person produced. In the end, the fit men sweat more than the fit women not because they had more active sweat glands at any given time, but simply because their sweat glands produced more sweat. On that note, the number of sweat glands any one person has can range from two million to four million, and researchers have found that those who are deemed “heavy sweaters” more sweat glands than average and ones that are more sensitive to nerve stimuli.

There’s far more sweat facts like this to be heard on the podcast, including when everyone starts to sweat less as well as the answer to my long-sought after question. But the main point is that sweat is great because it keeps us not just comfortable, but alive. So why shun a physiological attribute that keeps you from dying? Heavy sweaters should be envied, not mocked.

Fact: Dogs are banned from Antarctica. And they should be happy about it.

Antarctica is the world’s largest preserve, “devoted to peace and science,” encompassing more area than the United States and Mexico combined. And that peaceful frozen dessert is also devoid of dogs. That’s because an international treaty banned plants and animals not native to the landmass (barring humans) in the 1990s, fearing disturbance to wildlife and the introduction of disease.

But before their ban, dogs had a pretty unhappy time on the continent. The first big moment in Antarctic dog history was when a Norwegian team of explorers set off to reach the South Pole in 1911. They couldn’t have made it without the aid of their sled dogs, but at a price. The journey began with 52 dogs, but the group came back with just 11, eating most of the pack along the way. Only the lead dog made it back to Norway, where he lived as a king, fathering a litter of puppies and feasting off free slabs of meat from the local butcher.

Perhaps the most impressive story from Antarctica of dog loyalty and unconditional love happened over the winter of 1958. A Japanese research team brought 15 Sakhalin huskies to help them establish a research station on an island off the coast. Stationed there for a year, the first group planned to leave, to be replaced by a second batch of scientists. With the arrival of a large storm, the researchers had to flee the island by helicopter, leaving their dogs behind, tied up with a few days’ worth of food. But the second group never made it, unable to reach the island by boat. The Japanese expedition had to wait an entire year before they returned. At the base, they found two of the original dogs waiting for them, overjoyed to see people after surviving the Antarctic winter on their own.

Fact: There was once a committee to get Americans to eat more organ meats (and it worked!)

I have apparently gained a reputation in the PopSci office as “the organ meats person” because when I mentioned them in a meeting everyone commented that I should “finally talk about them on the podcast because I love them so much.” My family has always had chopped liver at various holidays and my aunt taught me that the chef’s treat during Thanksgiving meal prep is cooking up the innards in plenty of butter and salt. So yeah, I like organ means. I didn’t know anything about the push to get Americans to eat more of them until I read The Power of Habit, by Charles Duhigg. The book is full of weird tidbits like that so I definitely recommend it.

I also didn’t know until I started digging into this for the pod that brains are mostly safe to eat. I’ve been scarred somewhat by terrifying stories about prion diseases like mad cow and Creutzfeldt-Jakob, and I thought that most animal brains were risky. It’s true that multiple mammals—cows, sheep, goats, even cats—can carry prions, so for that reason I might steer clear just in case, but the reality is that the incidence is very low.

If you’re looking to start your organ meat adventure, I highly recommend liver (try paté!) or sweetbreads. Try them at a nice restaurant where they’ll be able to cook them properly, plus you won’t have the gross factor of handling the organs yourself. Enjoy!