Meet the very good dogs who hunt down invasive species

They can sniff out troublesome weeds and other pests. 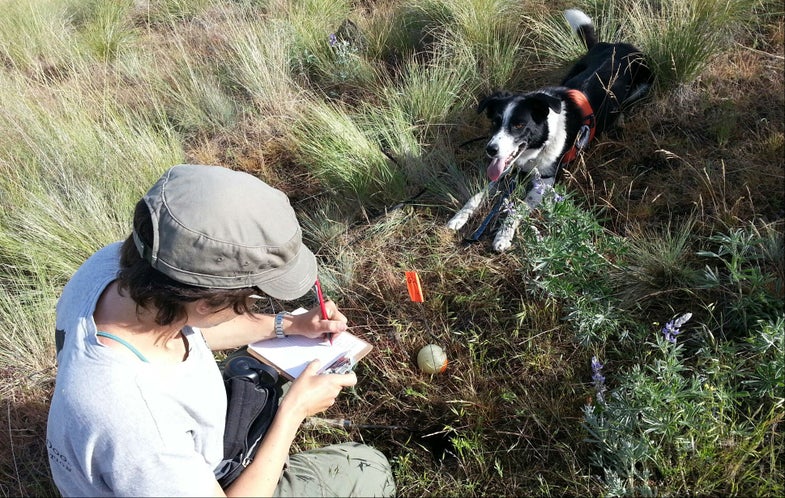 Lily is a golden retriever from Georgia. Seamus is a border collie from Montana. Together, they are leading a Working Dogs for Conservation team to eradicate an invasive weed from Mount Sentinel in Missoula, Montana.

Before the team of dogs took over, humans were doing a mediocre job of controlling dyer’s woad, a knee-high, light green weed native to southeastern Russia. The problem lay with how people usually identify the plant—by its distinctive yellow flower, which lights up roadsides across the southwestern U.S. The golden blossoms might be pleasant on the side of the highway, but dyer’s woad crowds out native plants from Arizona to Wyoming. “They displace multiple species within the native plant community,” says Jane Mangold, a professor of land resources and environmental science at Montana State University, via email. “A general loss in biodiversity ensues.”

But by the time the bloom is easily visible, it’s already too late; the dyer’s woad has reproduced.

That’s where the dogs come in. In 2011, Seamus and Lily made their first forays into the Montana brush, sniffing out the offending weeds. They were able to point out hundreds of plants that humans missed. The dogs kept coming back, since dyer’s woad can last up for years in the soil. This season, they found only four plants, according to Pete Coppolillo, executive director of Working Dogs for Conservation. They’ve nearly eradicated the tricky weed.

Dogs can definitely locate substances with their noses that humans can’t. We train them to sniff out cancer, bombs, drugs and even the flu. The conservation dogs can find kit foxes in the San Joaquin Valley, gunpowder in Zambia, invasive brook trout and mussels in Montana and a cattle-killing bacteria in Yellowstone.

But none of this is surprising, because of course dogs have the advantage when it comes to sniffing out invaders. In a side by side comparison, dogs would beat their weak primate best friends at a smelling contest every time—right?

Wrong. “From a scientific point of view, there’s not a lot of evidence of how sensitive the dog’s nose is,” says Matthias Laska, a professor of zoology at Linköping University. Scientists have tested only 15 scents on both dogs and humans, depositing tinier and tinier amounts of each until they found exactly how much each species could detect. Humans were actually better at smelling five of them. “This statement that dogs are the undisputed super noses of the universe is simply not true,” says Laska.

Dogs perceive the world differently than we do, and rely on their olfactory sense more. They use their noses to identify each other and navigate through the world—humans do not usually go around sniffing each other. Dogs devote more of their mental resources to their sense of smell, according to Alexandra Horowitz, a psychology professor at Barnard College, in her book Inside of a Dog: What Dogs See, Smell, and Know. Their olfactory bulb takes up about an eighth of their brains, a larger percentage than our visual cortex takes up in ours. However, in a Nature Neuroscience study both species did an equally accurate job of following the trail of a desirable scent through a field, though the dog tracked a dead pheasant and humans followed chocolate essential oils. Both the pups and undergraduates became better trackers with practice.

And the working canines do practice. The Working Dogs for Conservation screens 1,000 shelter animals for every one dog they put into training. Then half of them fail out of pup smell school. The best dogs are energetic and highly motivated by their toys, says Coppolillo.

Scientists have never made dogs sniff the air for illegal bushmeat or marijuana while standing on their hind legs, human-style. But perhaps they would be able to detect these scents, and many more, under human behavioral restraints.

“If we consider that every item has an odor, then, given dogs’ olfactory acuity, we can expect that dogs could be trained to tell us when they detect pretty much anything,” says Horowitz via email. But researchers have also never forced humans to track hundreds of smells through airports, highways and the Serengeti. Until they do, we don’t know the full extent of the Lily and Seamus’s smelling super powers. . . or that of Homo sapiens.