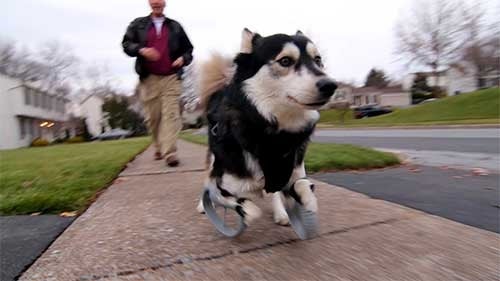 You should see this dog run. Derby was born with deformed front legs, but recently received a pair of 3-D printed prosthetics, which he is quite good at maneuvering in:

3-D printing experts often talk about how helpful printers are for rapid prototyping. That turned out to be true in Derby’s case. “Having these images on file on a computer and being able to print them is a lot quicker than having to hand-sculpt every single mold and rebuild these braces five, ten times,” animal orthotist Derrick Campana says in the video, which was made by the company 3D Systems. Campana, who works for a pet-prosthetics company called Animal Ortho, designed the prosthetics’ cup, shaped just for Derby’s legs. Then he sent the cup’s specifications onto 3D Systems for scanning and further design.

3D Systems decided on the prosthetics’ loop shape, instead of the more straight up-and-down shape common in pet prosthetics (See Oscar the cat). Tara Anderson, a 3D Systems employee who took care of Derby as a doggie foster mom, worried a peg-like prosthetic would dig into the dirt. The loops seem to suit Derby just fine.

3D Systems’ printer printed Derby’s prosthetics all in one job, with a machine that is able to combine two materials in one print. The prosthetics use a stiff material for their loops and spokes, but a softer material for the cup where they attach onto Derby’s legs.