Five animals that do our dirty work for us

Dogs and crows with unusual nine to fives. 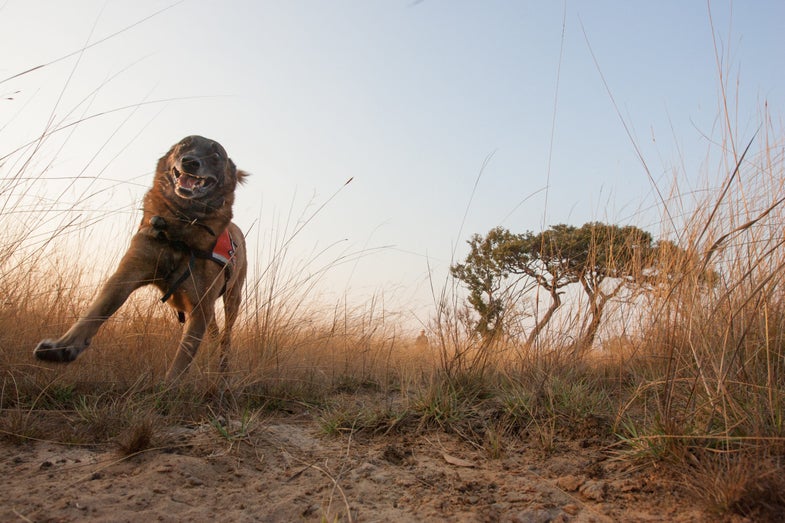 This is Pepin, a dog on a mission in the Serengeti. Pete Coppolillo
SHARE

It’s hard to pay other species for their labor, though they work endlessly to support human existence. None of the MGM lions ever garnered royalties for their famous roars. Honey bees contribute more than $15 billion to the U.S. economy by pollinating agricultural plants, and they don’t get a cent. Even without the motivation of cash, we continue to persuade our fellow Earthly inhabitants to do our bidding with tricks (like taking advantage of their natural sociability), treats (like a beautiful blue ball or peanuts), and genetic engineering.

Here are a few examples of animals who do the jobs we can’t—or won’t—do for ourselves.

A murder of cigarette butts

Crows are smart enough to learn to trade cigarette butts for food. In 2008, technologist and writer Joshua Klein gave a popular TED talk about his idea for a wild crow vending machine, which rewarded the birds for picking up spare change. Klein’s experiment was quickly proven sketchy and impossible to replicate, but inventors continue to try to harness the corvid’s vast intelligence.

The latest iteration is a Dutch machine that rewards crows with food when they deliver cigarette filters from off the street. It certainly sounds nifty, but scientists who study crows are weary about this well-worn concept. “The crows probably have the cognitive ability to do this, they don’t have the motivation,” says Kevin McGowan, an ornithologist at Cornell University.

John Marzluff, a wildlife scientist at the University of Washington, takes his reticence even further. He doesn’t think we should try to persuade wild animals to do our dirty work at all. “We should celebrate them for the all the amazing things they do, not because they can go pick up our cigarette butts,” he says. He points out that crows already serve as the cleanup crew of the ecosystem, picking up roadkill and other dead animals. Distracting the crows with other tasks could cause them to neglect this natural behavior. In addition, other birds already pick up cigarette butts, but they don’t do it for peanuts. They line their nests with the pungent litter in order to drive away pests and parasites.

The future of betrayal

On November 6, the Environmental Protection Agency gave permission to the start-up company MosquitoMate to release male mosquitoes carrying a deadly bacteria. When the male mosquitoes (which don’t bite) mate with the wild female mosquitoes that spread disease, the bacteria will keep her eggs from hatching.

Mosquitoes are not the only animals that can lead their kin to destruction. So-called Judas goats were traditionally trained to lead a herd of sheep to slaughter, without facing harm themselves. This concept was put to a modern test during Project Isabela, a program on the Galapagos Islands that was completed in 2006. Invasive wild goats decimated native plant species with their voracious appetites, leaving the islands’ famous tortoises to starve to extinction. These goats simply had to go, but tracking them down one by one took too much time. So scientists gave some goats they captured special tracking collars, then set them loose. These Judas goats would find their friends and a helicopter would follow, killing all but the tracked individual. This project was immortalized in the Radiolab episode “Galapagos”.

Other invasive species are wreaking havoc on ecosystems all around the world. And smaller, better camouflaged pests can be even more difficult for conservationists to eradicate. Thankfully, wherever these weeds or bugs strike, the Working Dogs for Conservation can help.

These dogs, which sniff out the scents of various invasive species, are chosen from shelters when they’re about a year old. The group screens some 1,000 pups to find each of the 30-or-so conservation heroes—and half drop out during training, according to Pete Coppolillo, the director of the program. He’s looking for energetic canines who are focused on their toys, which motivates them to get their work done. “They are excited to do their jobs—they love it,” says Coppolillo. “Most of our dogs have to be told when to stop working.”

The average work day for the dogs depends on the terrain and temperature, but at most they’ll work five or six hours. Younger pups cover more ground, hunting for scents like eau de grizzly bear. Scientists can then put tracking collars on the elusive carnivores. Older dogs can do more detailed work, like searching for the tiny invasive Argentine ants. When they become too sniff for pests, the dogs retire to live on their handlers’ couches.

One approach to wound sanitation

While our canine friends can help us find and destroy other species outside the body, maggots help prevent infection underneath the skin.

For thousands of years, people from New South Wales to Central America have used maggots as tiny surgeons to clean dead tissue from the living flesh. However, it’s a delicate process. In contemporary medicine, the doctor cuts a hole in the dressing that’s the same shape as the wound. They place the rest of the bandage over the skin, in order to protect it from the insects’ digestive enzymes. Then the larvae are placed in a netting over the wound, so that they can be easily gathered up when necessary. Maggots as medicine have gone through cycles of being in vogue, and in 2017 the idea is alive and wriggling. This year, the International Conference on Biotherapy took place place in Istanbul, Turkey in October.

A web of opportunity

Randy Lewis, director of the spider silk lab at Utah State University, has raised transgenic goats for twelve years. These handy mutants produce spider silk in their milk, which the scientists at Utah State are turning into useful materials like coatings, adhesives and gels. These herd animals hang out at the university farm, and get along much better than actual spiders, which often eat each other if given the opportunity.

The transgenic goats live fairly normal lives for their species, though the scientists keep them under constant video surveillance to make sure none are stolen. They spend a little more time with humans than the average goat, and are milked a little less—about 180 days a year, instead of 280. Lewis says the Utah team has had success with basic artificial selection. For maximum effectiveness, he breeds the female transgenic goats with the standard bucks that have moms who produce a lot of milk.

Lewis says that if he had a choice between becoming a transgenic spider-silk-producing goat and a standard goat, he would go with the former. “If I had a human logic process, I’d rather be the goat that can contribute more than just my milk,” says Lewis.

Correction: A previous version of this article mistakenly labeled waxworms as maggots in a photo caption.