Come watch a supercomputer simulation of a devastating tornado

The storm is made up of nearly 2 billion data points 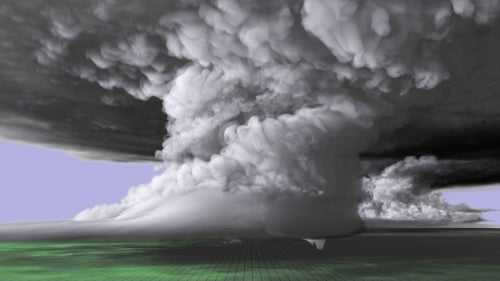 When Leigh Orf, an atmospheric scientist at the University of Wisconsin-Madison, strives to unravel the mysteries of tornado formation, he needs something way bigger than a laptop. Phenomena like the huge, supercell thunderstorms he studies involve such vast amounts of data, only a supercomputer will do.

Orf wants to answer what he said is a key question in meteorology: “Why do some of these storms produce these devastating tornadoes?” To get at the answer, he turned to simulation. The result—which is absolutely mesmerizing—is based on the conditions surrounding a very real, very powerful, and long-lasting tornado that struck Oklahoma on May 24, 2011. It ranked at the top of the Enhanced Fujita scale as an EF-5.

But here’s why Orf needed time on a supercomputer. His simulation—done using the Blue Waters machine at the University of Illinois—involved modeling a three-dimensional block of space that measures roughly 75 miles wide, 75 miles long, and 12.4 miles tall. For the computer model, that space was in turn broken down into an astounding 1,839,200,000 smaller chunks, many of them cubes that measure about 100 feet on a side.

In each of the chunks of space, the computer simulates factors like wind speed and direction, temperature, barometric pressure, humidity, and precipitations like snow, hail, and rain.

“This type of work needs the world’s strongest computers just because the problem demands it,” he says. “There’s no way around it.”

It boils down to the huge amount of three-dimensional space the computer is simulating, subdivided into those nearly 2 billion parts.

“It’s not necessarily that the weather is complex, it’s that the feature is big and it needs to be very highly resolved,” he says.

The simulation required about three days of time on 20,000 cores of the supercomputer.

Ultimately, the goal is to better understand the formation of the those powerful, deadly tornadoes sometimes spawned by powerful thunderstorms, and Orf says their simulation is helping them do just that.

“For the first time we’ve been able to peer into the inner workings of a supercell that produces a tornado, and we’re able to see that process occur,” he says. “We have the full storm, and we can see everything going on inside of it. So just about everything is a discovery, right now, because no one’s done this before, not at this scale.”