This is the first fluorescent frog ever and he’s adorable 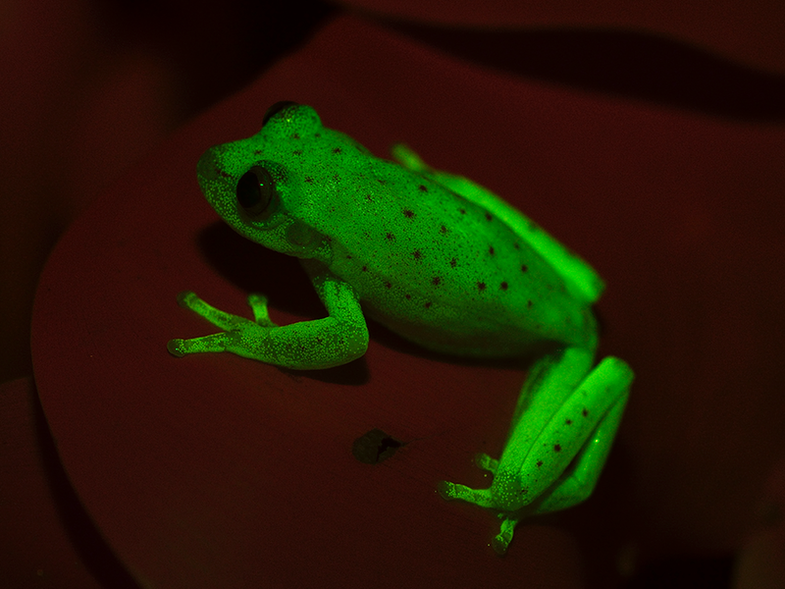 This little guy is the world's first fluorescent tree frog that we've ever discovered and, as Popular Science reported earlier this week, he probably doesn't even know his own smolder. The super frog's skin takes in ultraviolet light and sends it back out in the bright green fluorescent form pictured here. He's the newest addition to an elaborate secret society of glowers that spans land, but mostly sea, and includes fluorescent parrot mating marks and bioluminescent anglerfish. Julián Faivovich and Carlos Taboada (Museo Argentino de Ciencias Naturales "Bernardino Rivadavia"—CONICET)
SHARE

The South American polka-dot tree frog knows how to partaay. He’s a blacklight rave in a tiny frog package. He goes where no other frogs—and very few land animals—have gone before: he fluoresces.

He looks dull to the naked eye, but under the right light he shines. Literally. A team of interdisciplinary researchers discovered it by shining an ultraviolet light on this little frog man and observing his glow. They published their results on Monday in Proceedings of the National Academy of Sciences. Right now you’re probably thinking “a glow-in-the-dark frog—cool!” but you’re wrong so stop it. He doesn’t glow in the dark, he fluoresces, which is a whole other thing. Glow-in-the-dark things, like those stars you had on your ceiling as a kid or the bouncy ball you won at an arcade, work through phosphorescence. Phosphorescent materials get energized by a light source, often by natural sunlight, and then emit the energy back out over a long period of time. Thus, they glow in the dark even after you take away the light source. After a while, though, they’ll lose their charge and go dark.

This lil frog never loses his charge. His skin takes in ultraviolet light and emits it as a bright green color. Bulbs that emit only UV light are also called blacklights, partly because they sound cooler but also because we can’t see it with the naked eye. This makes for a very cool effect when this frog is under an UV light—he seems to glow on his own because all we see is the green color he emits. It’s extra exciting in this case because in the daylight the polka-dot tree frog is pretty bland. He’s greenish-brown with little spots and is exactly the kind of animal you’d walk right by in a rainforest.

You’d probably walk by him at night, too. There’s not much UV light around in the dark, so he wouldn’t light up the area the way we some other glowing animals. Phosphorescence and bioluminescence are the two main ways things can glow at night. Bioluminescence is how many ocean creatures light up, much like the algae that illuminates beaches in Tasmania or the fireflies you see in your backyard. It works through a reaction between an enzyme and a pigment that produces enough energy to glow. It doesn’t have to be charged by a source because the organism is producing the light itself.

Our frog dude can’t glow on his own and in fact can’t even really glow-in-the-dark. There’s not really a natural source of UV light at night—our main source during the day is the sun and the radiation doesn’t stick around after sunset. So really, this frog glow-in-the-day or glow-in-low-light. We just don’t notice because during the day the light from the sun is too bright to see a faint green color emitting from an already-green frog.

And there’s not a good reason to suspect a frog would be fluorescent—most land animals aren’t. While there are plenty of examples of fluorescing animals underwater (eels and some turtles come to mind) on dry land, the characteristic is rare. Butterflies, spiders, and scorpions are among the few other terrestrial creatures known to fluoresce. Parrots are the only other example of purely terrestrial vertebrates with this ability—and honestly, who even knew that parrots could fluoresce? They mostly seem to use fluorescence as some kind of communicating symbol, but no one knows exactly why. It could be a kind of sexual selection—parrots prefer other parrots with fluorescent markings as mates.

No one has yet studied the polka-dot tree frog’s visual system in depth, so it’s unclear exactly what they’re picking up from each other’s fluorescence or if they are at all. We just don’t know whether these frogs can pick up the low levels of light coming from each other’s skin or not. In general, though, green tends to be part of the spectrum that amphibian eyes are most sensitive to. If their eyes can pick up that faint glow, then fluorescing green could be very useful at twilight when light is low—they’re basically converting what little UV light is left into a form of light that other members of their species can see.

Another mystery is how the frogs fluoresce in the first place. They do it using a molecule that seems entirely unrelated to those that other animals use. The substance is actually more closely related to the molecules that fluorescing plants use, though the researchers don’t know why.

Now that we know amphibians can fluoresce, we have to go back and see whether other frogs have this talent and have just gone unnoticed, or if the polka-dot tree frog is unique. At the very least, he’s ready for a rave.