It's not all about hugging trees 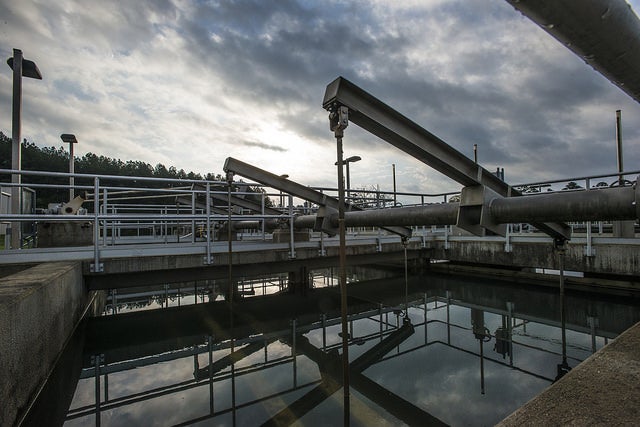 In August of 2005, as the dog days of summer lollygagged towards fall, waters agitated by the winds and currents of Hurricane Katrina rose up and over the Mississippi Gulf Coast. A flurry of criticisms followed—complaints of mediocre warnings, a lackluster disaster response on the part of the Federal Emergency Management Agency (FEMA), poorly made levees, and grief at the sheer loss of human life. Amidst the enormity of the disaster, it was easy to overlook the efforts of a small department, the National Homeland Security Research Center (NHSRC), in helping to put the region back together again. Its name, a tangle of government speak, seems designed to make the NHSRC forgettable.

The NHSRC was there because the flood waters did more than wash away homes and lives. It also absorbed things.

“You need to picture hundreds of gasoline stations, and hundreds of chemical storage facilities all flooding out,” said Steven Drielak who served as a Director with the EPA’s National Counter Terrorism Evidence Response Team during Katrina. Yes, the EPA has a counter terrorism team.

“The water enters, picks up all of these chemicals, mixes it into a huge toxic soup, and then flows through the city streets,” said Drielak. “Once the water recedes it all soaks into the ground. Now you’ve got this toxic material in the ground and you don’t know whether it’s safe or not.”

Policy makers had to decide if it was safe for people to return to their homes. For that, they needed information. The people who provide the information to help them make scientifically sound decisions? The NHSRC.

“I’ve always looked at the EPA as though there was two sides to it. There’s that whole regulatory side which I know is taking a lot of criticism,” said Drielak. “And then there was the law enforcement and the emergency response side. And the emergency response group truly depended on the National Homeland Security Research Center to basically be their science officers, so to speak. They were really an important part of the agency’s ability to respond effectively in an emergency when there was a release to the environment of something dangerous, whether it be manmade or an act of God.”

Over the past twenty years, and increasingly over the past few months, the EPA as a regulatory agency has become politicized. In the course of our recent reporting on the EPA, a few sources told PopSci to look at NHSRC—a department that does good, science-based work to keep Americans safe, often with little credit or recognition.

Why Create the NHSRC?

The NHSRC was established in 2002, within the U.S. Environmental Protection Agency’s (EPA) Office of Research and Development, in the wake of the September 11th and Amerithrax attacks, where anthrax spores were mailed to media outlets and two Democratic U.S. Senators (sickening 17 people and killing five).

The NHSRC “focuses on preparing the nation to respond to environmental disasters that require urgent attention,” an NHSRC spokesperson told PopSci.

Assisting with disasters like Katrina in 2005, the Louisiana Floods of 2015, and Corpus Christi in 2016—when a chemical that makes asphalt soft and flexible contaminated the city’s drinking water supply—fall under the unit’s overall focus on Homeland Security. As does dealing with terrorists using chemical biological or radiological agents

“When we have a threat to the nation’s populace, we as emergency responders and the decision makers above us at the senior policy level, we need to know whether it is a viable threat,” said Drielak. The boots on the ground spring into action if there is a credible risk, but first they have to determine if the risk is credible.”

“We depended heavily on them,” said Drielak, “because I had no way of knowing, if you put X and Y together and it turns into something else, and you put it in the water supply, whether that’s going to be an effective means of injuring the public.”

And then, of course, there’s the question of what to do after an attack.

“If someone uses a chemical or biological weapon inside the United States and it leaves a mess,” said Dan Kaszeta, “the issue is, who cleans up the mess and how?” Kaszeta worked with the White House Military Office providing biological and chemical terrorism emergency plans, and then spent another six years working with the U.S. Secret Service protecting George W. Bush from chemical and biological hazards.

“If it’s something like anthrax spore or a deadly nerve agent, you don’t just go in with a mop and a bucket,” said Kaszeta.

Cleaning up the Mess

That’s where the NHSRC comes in.

“The majority of the research happens within the military, but within the U.S. government it is the Environmental Protection Agency that is stuck with the consequence management of hazardous material,” said Kaszeta. “If you look at the organization charts, and the national response plans, they end up holding the bag for this bureaucratically. Nobody else has the job.”

It’s not as straightforward as killing the biological contaminant—chlorine gas, which was used in the wake of Amerithrax, does a reasonably good job of killing anthrax, but it also damages everything from carpets to artwork to electrical systems. A building purified with chlorine gas may be clean, but it’s also likely to wind up unusable. The NHSRC has to come up with more practical solutions.

To figure out the best way of tackling potential disasters, NHSRC research undergoes three phases: bench testing, piloting, and field implementation. What that looks like depends on the potential threat.

Take one of our nation’s underground transportation systems—New York’s MTA or Boston’s T—for example. If one of these systems were attacked, the loss of life wouldn’t be our only issue. As long as the systems remained contaminated, they’d remain unused, potentially crippling the economy of a major city. A game plan for that disaster has to include a method of clean-up that doesn’t permanently damage subway cars or tunnels, doesn’t interrupt transportation services more than is necessary, and gets the city up and running as quickly as possible.

Facilities like this aren’t just helpful in terms of testing potential terrorist threats. They can also come in handy in the wake of an industrial accident.

“What you have to understand is that there are a lot of things used routinely for industry and science that are far more acutely dangerous than chemical weapons that were made to kill people on the battlefield,” said Kaszeta. “Something that’s highly flammable, highly poisonous, and highly corrosive makes a poor weapon because you can’t store it very well, you can’t handle it very well, it doesn’t have a long shelf life, and it’s going to literally corrode through the artillery shell that you put it into. That’s not something that makes a good chemical weapon. Whereas I just described dozens if not hundreds of things that are used in manufacturing semi-conductors and printing circuit boards.”

Indeed, the most radioactive place in New York City isn’t the site of some dirty bomb attack, but a neighborhood in Queens that used to harbor a chemical plant that processed rare earth elements.

The NHSRC helps us to figure out how to handle those threats as much as ones from terrorists that live in our nightmares, but its future is uncertain. Under the previous administration, its role was downplayed amidst other EPA concerns. The 2018 budget blueprint calls for $233 million dollar cut in the EPA’s Office of Research and Development budget, a reduction of 48 percent. NHSRC is located within the Office of Research and Development.

“After 9-11,” said Drielak, “there were numerous threats to the nation’s infrastructure, specifically water, that were looked at closely by this group. They provided scientific advice to us as to the viability of the threat, and what we could do to minimize it. It was an invaluable service, and it will be a huge loss to the entire nation if that function is no longer available.”