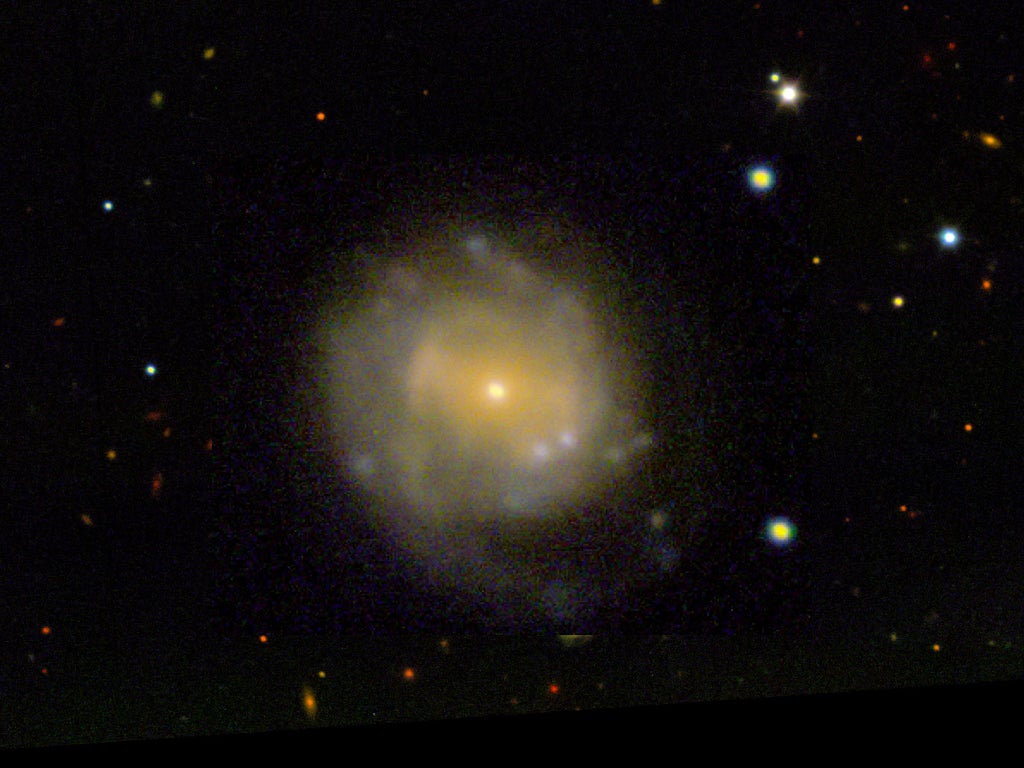 A few weeks after so many of us enjoyed Independence Day fireworks, scientists helming the Asteroid Terrestrial-impact Last Alert System (ATLAS) survey in Hawaii gawked at a different sort of light show: something called AT2018cow, or simply the Cow. It burst out of nowhere and generated an enormous amount of buzz for several weeks, and then seemingly disappeared just as fast.

What the heck was the Cow? Astronomers have spent that last six months trying to find an answer, and, as reported in a new study published Thursday in The Astrophysical Journal, it looks like we now have a much better idea of what exactly this mysterious phenomenon was. The problem is that it’s still pretty much a mystery.

The Cow was what’s called a transient astronomical event, where an object or phenomenon exhibits an extremely short duration (anywhere from seconds to years, which sounds broad—but in cosmic terms, pretty much anything less than several million years is a blink of an eye). And when the giant bright flash was first spotted, nobody knew what to make of it.

“At the time, from the information that was here, we knew there was a force, and it was a brightening flash, but it was not clear whether the source was in our own galaxy or not,” says Raffaella Margutti, an astronomer at Northwestern University and the lead author of the new paper detailing the findings. Another research team was able to verify the Cow was not part of our own galaxy—it sprang up in the CGCG 137-068 galaxy, which is 200 million light-years away in the constellation Hercules. From then on, astronomers knew for certain they had stumbled upon the closest transient object of its kind ever found.

Initially, many suspected the Cow was a supernova, but the luminosity was off the scales—about 10 to 100 times brighter than expected, which would have made it one of the brightest supernovae on record. It was also spewing out particles at 10 percent the speed of light, which is much faster than exploding stars are capable of. And it was bizarrely, rapidly peaking as scientists were watching it, beginning to wane in just over two weeks after initial observations began.

Margutti and her team knew they were looking at something that no one had ever really seen before. She began to reach out to others around the world and make preparations to observe the Cow using a wide array of instruments and collect measurements across the electromagnetic spectrum, from x-rays, hard x-rays (10 times more powerful than the former), radio waves, and gamma rays, to assess the aftermath of the Cow long after it’s brightness had begun to fade. Those instruments included NASA’s NuSTAR and Swift missions, the Submillimeter Array (SMA) in Hawaii and the Atacama Large Millimeter Array (ALMA) in Chile, and the W. M. Keck Observatory on Maunakea, Hawaii.

That holistic approach turned out to be key to this investigation. For example, an initial analysis would suggest the Cow is a disruption of a star by a black hole that has a static, specific size.. That explanation makes sense—except that the radio emissions from the object show the space is expanding in a very thick and dense environment, which is not what you’d expect to see around a black hole with a definite size.

The hard x-ray observations are what really excited the research team. Margutti and her team noticed the object was emitting extremely bright hard x-rays, which was a total shocker. “Our first explanation was that we did something wrong, and we have to go back and figure the problem out,” says Margutti. But other instruments were verifying the measurements. This type of feature is not commonly observed by researchers studying extremely compact objects.

It is, however, a feature commonly observed by astronomers studying black holes that are gravitationally sucking gaseous and solid matter from their surroundings. After conversing with other experts, the team started to contemplate the possibility the Cow was actually a newly-born compact object.

Essentially, Margutti and other colleagues now believe the Cow event was the birth of a black hole or a neutron star. This would be the first time in history scientists have watched such an event as it unfolded. It’s probably a black hole—since the object seems to be drawing in material from its surroundings and radiating energy—but scientists are not ruling out the notion that a neutron star with a powerful magnetic field could drive this process. And to be fair, the research team isn’t completely ruling out the possibility that the Cow is actually just an extremely unique and powerful type of supernova.

Why does the mystery still linger? The Cow was just too bright to deeply peer into. After the Cow transient finally disappears in full, the team might have a shot at making follow-up observations of the aftermath and discerning what the source might be.

All of the study going into the Cow should be a major boon for scientists who want to better understand how objects like black holes and neutron stars arise in the universe. “It means we effectively have a new window to study the formation of these objects,” says Margutti. “That’s a window we didn’t previously have access to before.”

Beyond that, the findings are also a major step forward in the progression of multi-messenger astronomy: an approach to space research that emphasizes observing objects and phenomena across a wide variety of signals, to paint a more complete picture of how these things behave. For example, we can spot black hole mergers by detecting gravitational waves thanks to projects like LIGO, but moving forward, it should be possible to also study those bodies through electromagnetic radiation and cosmic rays. “I’ve been a strong advocate for multi-wavelength observations for transients,” says Margutti. “I think this is going to be more and more important in the future,” especially as technology becomes sharper and more optimal at collecting this sort of data.

For now, the team is keeping an eye on the Cow and waiting for it to get even dimmer. They’re preparing for another round of observations within the next few months, but they’re also in the process of finding and characterizing other Cow-like events. It seems like there’s a pretty robust population of these stellar animals strewn about through outer space, and we now have a better idea of how to correctly observe and describe them. “These transients are rare, but not so rare as we once expected,” says Margutti. “And now we know how to find them.” Looks like we’re on the hunt for an entire herd of cosmic cattle grazing around the universe.