What this new research means for radio astronomy 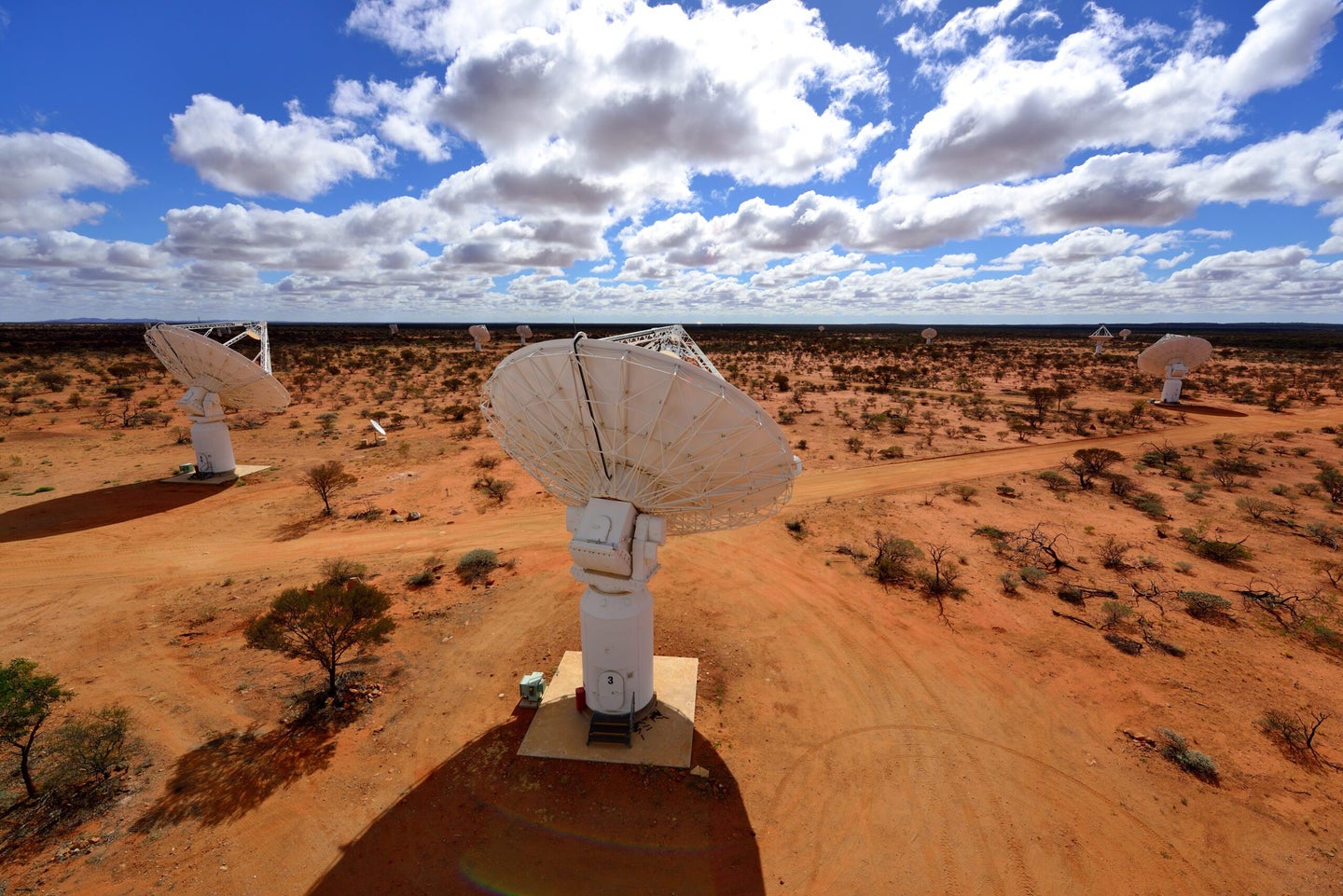 One of the most violent cosmic events is also one of the most common. Thousands speckle Earth’s skies every day, but they disappear so quickly that astronomers didn’t even realize they were happening until about ten years ago. And scientists still don’t know what’s causing them.

Just about everything we know about these mysterious flashes of light fits into their name: Fast Radio Bursts—FRBs to those in the know. They last for just a few thousandths of a second. They outshine just about every other source of radio waves in the sky. And whatever produces them is very, very energetic.

Now researchers have a lot more of them to study. Using a new array of radio telescopes in a remote corner of the Australian desert, one team has single-handedly boosted the number of confirmed observations by nearly half with a publication appearing Wednesday in Nature. The new collection confirms that the events, whatever they are, take place unimaginably far away, and suggests that researchers can exploit these cosmic messengers to probe the otherwise unreachable intergalactic stretches of space. Their achievement signals the start of a new era of radio burst astronomy, one where astronomers mark the time between detections in days, rather than years.

“We found our first FRB within 3.5 days of observing,” says Ryan Shannon, the Swinburne University astronomer who led the effort. “Although it turns out we were a bit lucky. Over the course of the search, we saw one about every 14 days.”

The fact that the team found bursts so often, and in most of the directions that they looked, supports the widely-accepted conclusion that these flashes reach Earth all the time—as many as 10,000 each day. But despite their constant presence in our skies, their brevity meant that the first one didn’t make it onto a hard drive until 2001, and escaped notice until 2007. Scientists then spent years deciding whether the specters in their data actually represented cosmic events (a number of similar-seeming bursts later proved to be impatient researchers opening microwaves too early).

“In 2012, we knew of just one FRB, and no one knew if they were real or not,” says Emily Petroff, a fast radio burst researcher who recognized the first real-time FRB and maintains a catalog of reputable signals. As of Wednesday, the database listed just 28 FRBs published in peer-reviewed journals. Now it has swelled to 47 unique entries. “Adding 20 FRBS in one pub[lication] is just an incredible effort,” she says.

Even though they happen all the time, the sky is vast and FRBs are short, so astronomers have to be looking in the right place at the right time. Signals from outside our galaxy also spread out in a particular way as they travel, and since no one expected short events could be bright enough to reach across the cosmos as FRBs do, no one was looking in the right way until recent years.

Shannon’s team found the flashes with the Australian Square Kilometer Array Pathfinder (ASKAP), a cluster of eight relatively small antennas located in a patch of desert far from the interference of cell phones, and, presumably, microwave ovens. The team spent the majority of 2017, 24 hours a day, pointing the dishes in different directions. Each individual telescope is weaker than other major radio telescopes, but together they can cover a lot of sky—about 1,000 full moons worth, according to Shannon. The area represents just one-third of one percent of the sky, but that’s still hundreds of times broader than previous single-telescope searches. The wide scope also let them carry out a collective 12,000 hours of follow-up observations after each find to search for the ultimate reward: a repeat offender.

Of the four dozen or so known FRBs, almost all are one-off events. One FRB though, has proved extraordinarily active and irregular, shooting off dozens of pulses in a matter of hours and then disappearing for months. This behavior let astronomers locate and study “the repeater,” as it’s known, to a much greater degree than the other known bursts. The Australian team hoped to find more repeaters, but no luck. “We haven’t seen any hint of a signal right before the FRBs happened or after,” Shannon says.

They did, however, earn the honor of finding the brightest burst to date, one that expelled as much energy in one millisecond as our sun does in 80 years. To Shannon at least, this level of expenditure puts to rest a far-fetched proposal that the pulses are side-effects of alien propulsion, the cosmic equivalent of a car backfiring. Surely no advanced civilizations could have such lax efficiency regulations.

Shannon’s team also confirmed that these “astrophysical transients” are taking place in distant galaxies—some literally half the cosmos away. As the light rays traverse the universe, they encounter electrons, which gently bend their path. Some rays bend more than others, and the whole burst spreads out. We see something similar happen here on Earth when white light spreads into a rainbow while passing through a prism. In this case, though, astronomers aren’t sure how the cosmological ‘prism’ is organized. The matter in the voids between galaxies is too faint and too far to study directly, so the team hopes that cataloging large populations of FRBs and measuring how much each has spread will give them an idea of what this stuff is like, thick or thin. Lumpy or smooth.

Another benefit of stockpiling fast radio burst detections? We might actually figure out what they are. Shannon and Petroff both say the smart money is on neutron stars, collapsed stellar corpses that didn’t quite make it all the way down to a black hole. While nothing in our galaxy shines brightly enough to match what ASKAP saw, only the super-dense neutron stars are small enough, nimble enough, and extreme enough to spit out massive millisecond-signals. Whether FRBs come from colliding neutron stars, neutron stars smashing into a black hole, chaotic baby neutron stars who haven’t yet matured into a more stable pulsar, or neutron stars doing something completely new, there’s a good chance these objects lie at the heart of the mystery.

And with the radio astronomy community dedicating more of its machinery to finding new FRBs, answers shouldn’t take long. ASKAP will return to the hunt next year with four times as many antennas, and will point them all at the same area of sky in an effort to pinpoint any burst’s galaxy of origin. Petroff rattles off a handful of other arrays slated to come online in the next year too, all geared toward wide-ranging yet precise observing. “We’re going to find so many FRBs,” she says. “We’re all just going to clean up. I don’t know if we’re even ready for it.”

She says the field has learned a lot about what questions to ask from its forty-year quest to figure out what was causing brief gamma-ray bursts (short answer: also neutron stars), and that more advanced technology combined with brainpower should supercharge the effort this time around. “It could definitely still take a few decades,” she says, “but at the pace we’re moving now I think there are too many clever people working on this now to not have it solved soon.”