Three gravitational wave detectors are much better than two 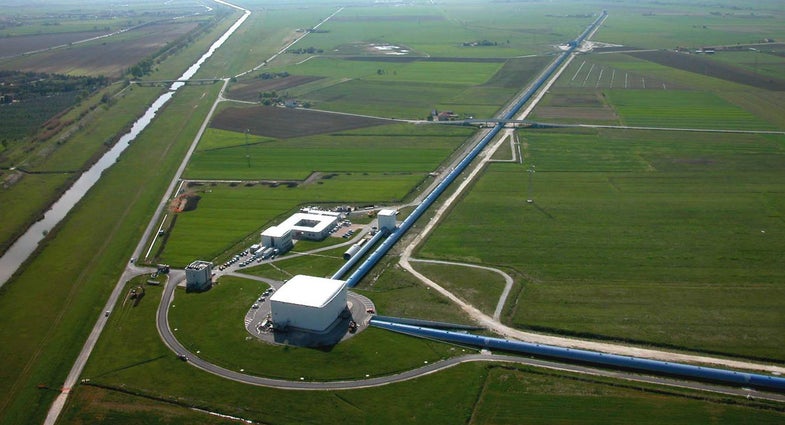 About 1.76 billion years ago (give or take), two circling black holes smashed into each other, birthing a new object 53 times heavier than our sun. In the process, they formed ripples in the fabric of spacetime. These gravitational waves travelled away from the site of this event, dubbed GW170814, at the speed of light, arriving at Earth on August 14. As they passed us, the two LIGO detectors and—for the first time—Italy’s Virgo observatory all caught the signal.

LIGO, or the Laser Interferometer Gravitational-Wave Observatory, is a set of two detectors located in Livingston, Louisiana and Hanford, Washington. Last year, LIGO announced it had detected gravitational waves for the first time, a major breakthrough that vindicated the predictions of Albert Einstein. In his theory of general relativity, he described spacetime as a physical substance whose shape could be altered by massive objects like black holes. When these objects undergo energetic changes—say two of them collide, a black hole consumes another massive object, or a star goes supernova—they create ripples in spacetime like the ridges you see when you toss a stone into a pond. To learn more about how black holes form, and how well the theory of general relativity holds up, we have to observe these waves—because black holes do not emit light, so we have no other way to view their behavior.

Since its initial discovery, LIGO has picked up more gravitational wave signals. And the more it sees, the less exciting each announcement might seem to the general public. Why should we care about this new one? With the new Virgo detector joining the hunt, we now have three locations scanning for gravitational waves, which will add crucial details to each sighting.

A third observatory adds confidence to each signal, reducing the odds of a false alarm by a factor of 10. It also gives scientists more information about the waves’ polarization, a characteristic predicted by general relativity. If the measurements defy Einstein’s calculations, scientists can hone the theory to make it more accurate—or replace it entirely.

“We’re basically trying to see if we can break general relativity, because that’s how our understanding evolves,” says Laura Cadonati, a Georgia Tech professor and deputy spokesperson of the LIGO Scientific Collaboration. “If aspects are not consistent, we find new theories.”

Finally, three observatories can pinpoint where the waves came from much more accurately than two. Think about the GPS signal that directs you to the nearest coffee shop on Google Maps. It employs a whole network of satellites to ping your phone, measure how long each signal takes to reach you, and, based on those different arrival times, calculate your exact position on the planet’s surface. If the GPS only had two satellites on the job, it could only point to a large region and say that you were somewhere within it. The more satellites you add, the more that region shrinks.

With gravitational waves, scientists are performing a similar task: finding the region where the wave-causing event originated, based on how long the signal took to reach each detector. In this case, it hit the Livingston location first, followed about eight milliseconds later by a ping at Hanford, finally reaching Virgo near Pisa, Italy six milliseconds after that.

They ultimately narrowed down the search to a swath of the universe measuring 60 square degrees. This is still a massive region—the moon only takes up 0.2 square degrees of our sky—but it’s 10 times smaller than the area that two detectors would have been able to find. The results will be published in Physical Review Letters, and are currently available on LIGO’s website.

This location may keep on shrinking as more gravitational wave observatories come online. Japan is currently at work at an underground detector called KAGRA, while India aims to build an exact replica of one of the LIGO detectors.

“Potentially in the 2020s, we’ll have five detectors operating in coordination,” Cadonati says. “That’s the plan.”

Knowing exactly where in space a wave-producing event occurred will let astronomers point other types of telescopes—instruments that detect neutrinos, radio waves, x-rays, and more—at that area to see what they can see. While black holes release no light, objects like neutron stars—which are the size of a city with a mass greater than our sun—do. So when a neutron star collapses, or a black hole gobbles it up, this event can produce both gravitational waves and other signals.

While the black hole merger addressed in this most recent study isn’t a candidate for these so-called multi-messenger observations, it shows that they could be possible in the future. “This one event has opened the door to the real potential for multi-messenger observations of gravitational waves, electromagnetic waves, neutrinos, all coming from the same source,” Cadonati says. “That will provide clues to understand the physics of the object itself.”

Even before the new observatories come online, LIGO and Virgo scientists will be hard at work improving the sensitivity of their existing machines. With greater sensitivity, gravitational wave detectors can pick up fainter signals that originate deeper in the universe. With each observation, scientists will be adding another black-hole or neutron-star statistic, one more puzzle piece in the picture of how massive cosmic objects form.