Fast Radio Bursts have an origin story—and we’re closer to learning what it is. 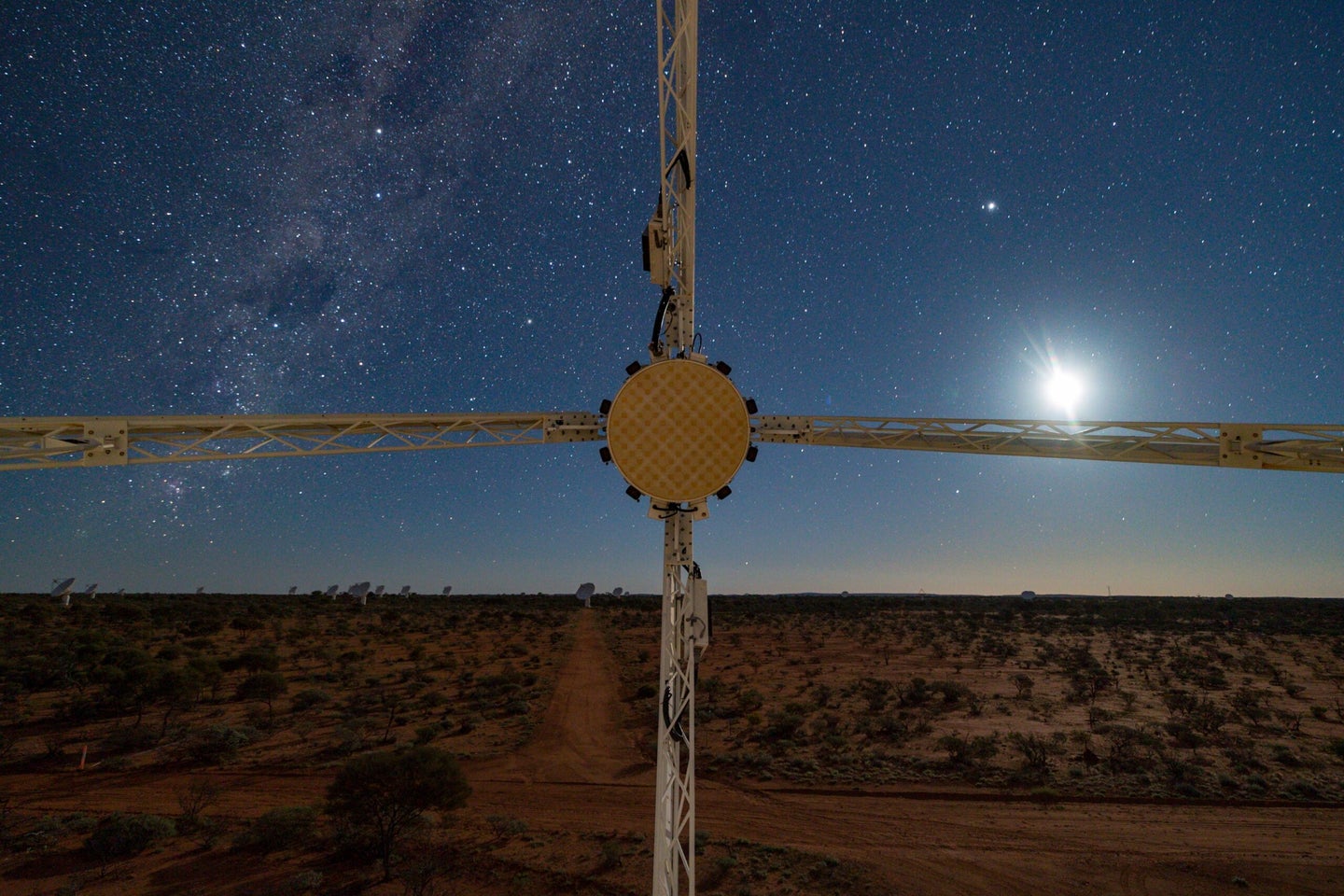 What comes to mind when you try to picture the most powerful object in the universe? Maybe an atomic bomb, or an ultra-powerful sun, right? Well, let me introduce you to the Fast Radio Burst: a strange phenomenon that stretches for just a few thousandths of a second, but can emit more energy than the sun does in 80 years. Thousands of FRBs flash throughout space at any given moment, yet for something so ubiquitous and so powerful, we know almost bupkis about how and why they’re formed. Much of that has to do with the fact that, since first discovering them in 2007, scientists have never been completely sure where they’re coming from. Are they expelled by black holes? Are they extensions of erratic stars running amok? Are they signs of intelligent extraterrestrials trying to communicate with us?

We’ve just taken a massive step forward in resolving that question. In a study published Thursday in Science, an international team reports the first-ever localization the origin point of a non-repeating FRB. “This was the first [FRB] where we both found it and had the right type of data to localize it,” says Keith Bannister, an astronomer with Australia’s Commonwealth Science and Industrial Research Organization (CSIRO) and the lead author of the new paper. “We had to build what we called the ‘live action replay’ mode in the telescope to localize this FRB.”

That ‘live action replay’ system could be the groundbreaking innovation we need to finally uncover which bizarre cosmic phenomena are producing and firing off FRBs into the rest of the universe.

“It’s a really great discovery,” says Brian Metzger, an astrophysicist at Columbia University in New York City, who was not involved with the study. “I don’t want to compare them directly, but in some ways, a localization is worth 100 events where we don’t know from where they’re coming from. There’s so much context you can get.”

The focus is on FRB 180924, now the 86th FRB detected by astronomers. Such signals are notoriously transient, and this one was just 1.3 milliseconds long—barely a blip to the human mind.

Theories on what’s producing these signals include conventional explanations like black holes or neutron stars or highly energetic supernovae, along with more offbeat options like blitzars (a hypothetical version of a pulsar) or dark matter collapses. And yes, sometimes people suggest they might come from aliens. One of the most lauded theories in recent years was pitched by Metzger and a couple of his colleagues, who suggested that the FRBs were effects of hyperactive flares from young magnetars (neutron stars accompanied by extra-powerful magnetic fields).

To be fair, this is actually not the first FRB ever. In 2017, scientists managed to pinpoint the home galaxy for a repeating FRB, FRB 121102 (one of only two observed on record). While still a difficult task, the repeated detections gave astronomers clues for where to look, and they ended up tracking it down to a weak dwarf galaxy 3 billion light-years away with a high rate of star formation.

As you can imagine, a one-off FRB is even more difficult to source. “The key is to have a telescope that can both find FRBs and is big enough, in terms of distance between antennas, to localize them,” says Bannister. “Previous telescopes have had one or the other, but not both.”

CSIRO has a trick up its sleeve that makes this task possible: the Australian Square Kilometer Array Pathfinder (ASKAP), a 36-dish radio telescope array located in Western Australia. In the past, all of ASKAP’s dishes were typically pointing in different directions, throwing a wrench into efforts to more accurately characterize the signal, including its point of origin.

Obviously, the simple remedy to this problem was to rearrange ASKAP’s dishes so they all pointed toward the same part of the sky. But Bannister and his team also took extra steps into improving the systems that make FRB data collection possible, customizing the hardware so it could make a billion different measurements per second, and creating novel software that could crunch those numbers in real-time.

So here’s how the “live action replay” system works: once ASKAP detects an FRB, data collection halts and the software proceeds to download all the raw data collected by each dish in the last three seconds. The original signal will actually arrive at each radio dish at different times, and astronomers can use these fraction-of-a-nanosecond lags to assess the position of the FRB with a precision of about 0.1 arcseconds—“equivalent to a human hair at a distance of 200 meters,” says Bannister.

The team then imaged the origin point and measured out the distance using three of Earth’s most powerful ground-based telescopes (The European Southern Observatory’s Very Large Telescope in Chile, the Keck telescope in Hawaii, and the Gemini South telescope in Chile).

As a result, we now know FRB 180924 sits on the outer rim of a galaxy 3.6 billion light years away in the constellation Grus, comparable to the size, shape, and luminosity of the Milky Way. As with other FRBs, interstellar gas caused FRB 180924 to slow down occasionally, through an effect called “dispersion.” Astronomers can actually use dispersion as a way to gauge what sort of gas and how much of it an FRB has zipped through on its way to Earth, giving us some sense as to what kind of matter lies between point A and point B and what kind of journey the signal took.

“For a non-repeating FRB, we get one shot to find it and measure its position, and the ASKAP team has done it beautifully,” says Shriharsh Tendulkar, an astronomer at McGill University in Montreal who was not involved in the study.

There is some confusion arising in trying to reconcile this new origin point with the dwarf galaxy that’s home to FRB 121102. it’s hard to fathom both galaxies producing the same type of inexplicably high-energy phenomena when the difference in size and luminosity between them is 1,000-fold.

“If anything, this discovery has thrown open more questions,” says Bannister. “We now know that FRBs can happen in quite passive parts of the universe. We previously thought you needed a lot of vigorous star formation to make FRBs.” He thinks the new findings disfavor a few models: the fact that FRB 180924 is coming from the outskirts of its galaxy raises doubts about the theory that supermassive black holes lodged at the center of galaxies are the usual source. Very young stars, like young magnetars formed after supernovae, are probably counted out as well, as are any explanations that don’t require any sort of galactic body. “We have to go back to the drawing board to understand how FRBs can happen in such a wide range of environments.”

Not everyone is convinced the new findings necessitate a radical shift in our current FRB theories. James Cordes, an astronomer at Cornell University who did not participate in the study, thinks it’s still a safe bet that neutron stars, particularly magnetars, are the most likely source for FRB production. The most major implication, he says, has to do with the theory that FRBs are formed in super luminous supernovae that are preferentially formed in dwarf galaxies with low concentrations of metals. “That may still be true to some extent, but the new FRB and its galaxy present a possible counter example,” he says.

There’s also the possibility that repeating and non-repeating FRBs are simply governed by different models. “Finding a young magnetar in the outskirts of a massive galaxy with old stars is like finding a whale in the Sahara,” says Tendulkar. “It is very early in the field of course, but this might suggest that repeating and non-repeating FRBs come from completely different origins,” and that the magnetar model only holds true for the latter.

Metzger himself doesn’t think the findings exclude magnetars outright. It may just be that magnetars are more diverse and form in more cosmic scenarios than previously presumed. “There may be more possible ways to produce these FRB-producing magnetars,” he says. “And nature might have more than one way to produce a fast radio burst.”

We’ll only answer those questions once we collect more FRB data, and it’s quite clear Bannister and his team have paved a new path for probing these phenomena in great depth. Localizing the origin point provides a much narrower window for identifying what objects at the scene of the crime could fire things off. More immediately, scientists can use FRB dispersion as a more robust way to map out the distribution of matter throughout the universe—which ought to be a boon for answering some cosmological questions. “This type of approach is the wave of the future,” says Cordes.

(Just don’t hold your hopes out for anyone to come out and say it’s aliens. It’s never aliens.)