Two Comics that Teach You About the Wide World of Bugs

This past weekend, I was in Philadelphia and had a chance to check out the Locust Moon Comic Festival. Put... 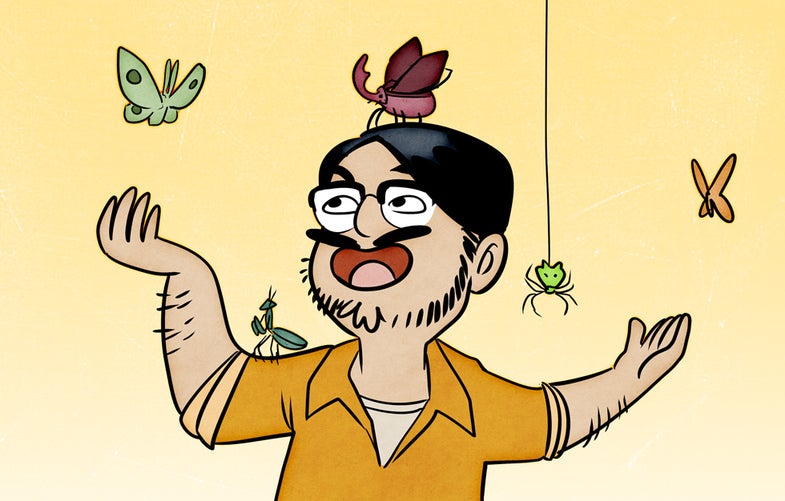 This past weekend, I was in Philadelphia and had a chance to check out the Locust Moon Comic Festival. Put on by the Locust Moon comic shop, it featured a pretty great collection of indie comic artists. It was nice to go to a comic fest as an attendee for once (more on that for a later post) and I’ll certainly be seeing about getting a table for next year.

Today’s comic features bugs. Mostly insects, to be precise. Though there’s a spider in that second panel. Entomology has always been a joy of mine, and I haven’t met a critter I wouldn’t pick up. As you might guess, I got stung a lot as a kid, and much later during a trip to Japan, I carried a giant centipede over to my shocked hosts before learning that they’re venomous. So imagine my surprise and delight to find two bug cartoonists at Locust Moon. The educational opportunities that comics provide are endless, and I always get really excited when I see how other people are using them to teach.

Esabelle Ryngin is an entomology student and the artist behind The Beginner Entomologist, a coloring and activity book that teaches kids (myself included) all about the plethora of insect life around us.The book is gorgeous, and has activities that teach everything from insect anatomy to how you can observe and collect bugs in the wild. There’s even an insect personality test. I’m a beetle.

Like many artists, Esabelle has been drawing as long as she can remember, but also like many people, was taught that science wasn’t a reasonable career choice. I myself, while always fascinated by insects, never even considered that I could actually become an entomologist.

“A couple years ago, though, I suddenly poured myself into Entomology almost completely via websites and blogs. I loved the idea of such wide biodiversity and the various niches and roles different insects played in the world around us, and I love metamorphosis and tough beetles and jelly-coated caterpillars. I wanted other people to appreciate insects too so that we could all enjoy them and talk about our local species- but working as a volunteer Insect Ambassador at the Smithsonian Natural History Museum, I quickly found that many people weren’t willing to learn about insects just for the fact that they were insects (or even if they weren’t insects, like arachnids, centipedes, and crustaceans).”

Since then, Esa has been using comics as a fun way to teach kids and adults alike that insects aren’t the scary, repulsive pests that they are so often portrayed.

Carly Tribull is a PhD student at the American Museum of Natural History where she specializes in the study of parasitic wasps. Her comic, Carly’s Adventures in Wasp Land takes the reader through her journey to becoming an entomologist and her decision to start drawing comics about it. You can actually read a bit about why she draws science comics over at Symbiartic, Scientific American’s art and science blog. Carly’s Adventures in Wasp Land looks at wasps not as flying death machines, but as a wide range of complex creatures—from the solitary Bembix americana, to the parasitic Acrodactyla quadrisculpta​, whose larvae ride around on a spider’s back before eating it.

“The science comic thing didn’t start until graduate school. My adviser (Jim Carpenter, he studies social wasps) had received a grant from the NSF that required an educational outreach project. I had interviewed with my biological illustration portfolio, and he knew I cared about educational outreach and wanted to develop my resume in that area, so he asked me if I’d like to organize something with our Ology department. The grant was about social wasps, so naturally, we did something wasp related.”

Carly’s hopes to show people that wasps aren’t that scary (even the parasitic ones) and they can be really fun. AMNH’s Ology website not only has Carly’s comics about becoming an entomologist, but it also has a game that teaches kids about hornet biology.

On top of their own work, Carly and Esa collaborated with other science artists to create a veritable ant-thology comic called Myrmex. It’s free to download, so there’s no excuse not to check it out.

You can find more Esa on Tumblr or Twitter

You can find more Carly on Twitter or Etsy