The Time I Got To Try On An Actual Space Suit

Also the time I realized I need to work out more. 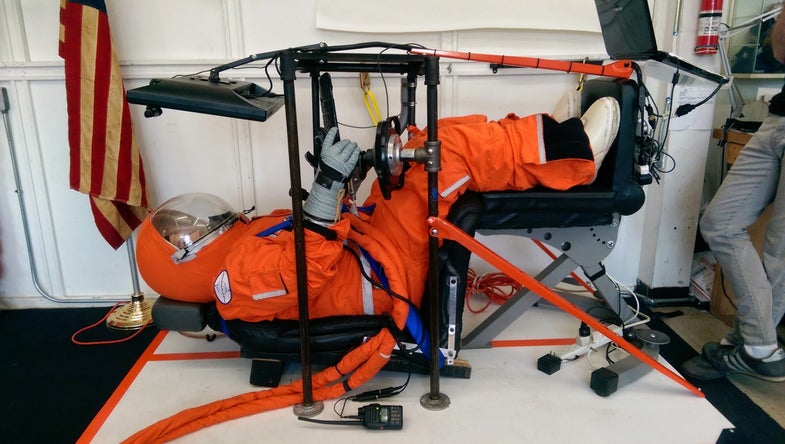 Suited up, I flew a virtual F-16 over Texas and the Moon. Dave Mosher
SHARE

I was peering out through the helmet of my space suit, when something terrible happened: I got an itch. And with my hands unable to touch my face, scratching it the good old fashioned way was out of the question. Thankfully, the suit’s manufacturers had predicted this very scenario and planned accordingly. A strip of velcro was positioned inside the helmet for me, and I was able to rub my face against it, relieving the discomfort. Even in space, things can get a little itchy.

Alright, so I wasn’t actually in space, but I felt like I was; instead I was at the Brooklyn Navy Yard, at the studio of Final Frontier Design —a startup company that builds the next generation of space suits. For a few precious hours, I got to try on one of their suit prototypes, getting a feel for what it’s like to be an astronaut (minus the zero-g).

When I first arrived for my space suit adventure, I was greeted by the company’s founders: Ted Southern, an artist and costume designer, and Nik Moiseev, a Russian mechanical engineer. (Ted’s space-enthusiast dog, Milo, was also in attendance.) Before I could suit up, they explained that I had some important paperwork to sign. The first was a standard Non-Disclosure Agreement, basically prohibiting me from sharing any design secrets. The second was a Technology Control Plan, which requires me to comply with the International Traffic in Arms Regulations. You see, in the eyes of the United States government, a space suit is classified as a weapon, so discussing the design of the suit to a foreign national is technically considered arms trafficking. (On a related note, I’m now requiring all my friends to provide proof of citizenship.) 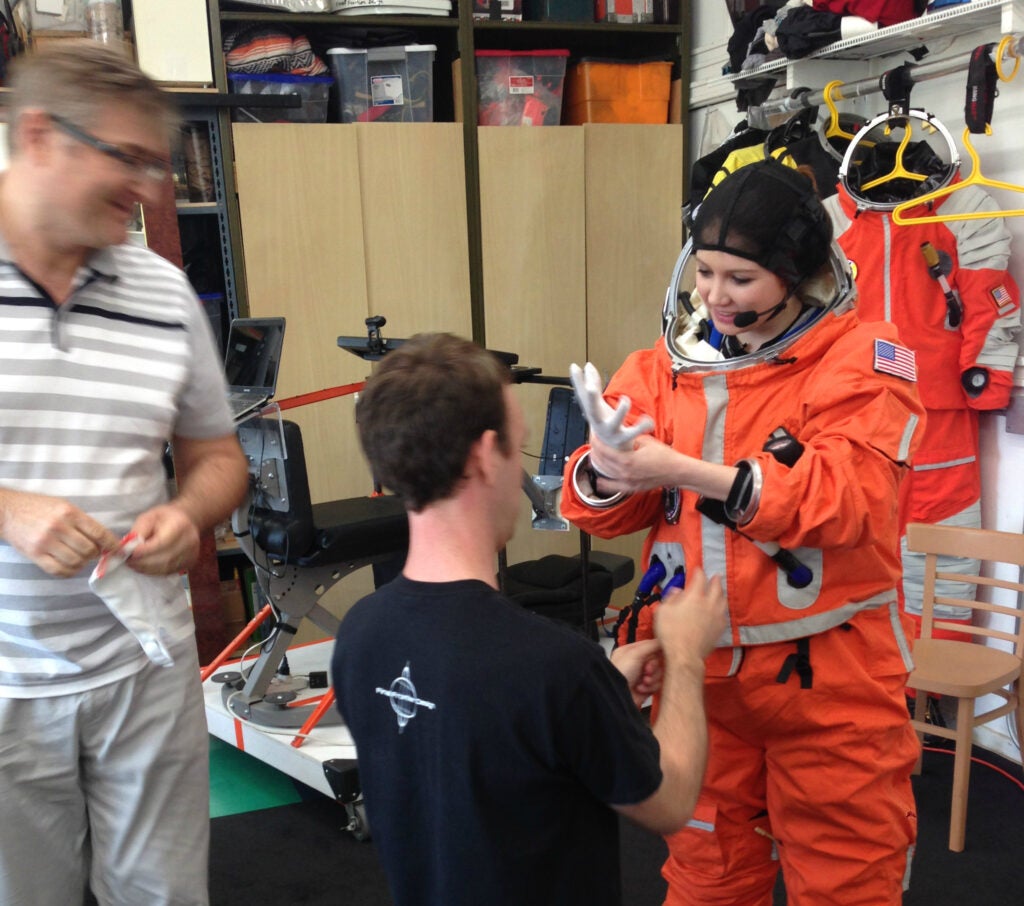 Once the formalities were out of the way, the fun part began. I filled out a sheet with my measurements, and Nik took a pretty tight stencil of my hand so he could pick out my proper glove size. I then sat through a delightful presentation of the history of space suits, which detailed the apparel worn by Yuri Gagarin and Alan Shepard, as well as the suits needed for “extra vehicular activity” during the Shuttle missions.

Since I couldn’t go to space in my blouse and jeans, Ted handed me two small pieces of long underwear to change into. The material was unforgiving, to say the least, but it didn’t matter, because it was time for me to put on the last suit I’d ever wear. (Okay, the one I’d wear for the next couple hours). Ted and Nik sat me down, as they pulled the orange suit up over my legs, waist and arms. They attached my specialized gloves and pulled the helmet over my head, all while oxygen pumped through the suit. At that point, it was official: I was wearing an actual space suit.

I strutted around the studio feeling a bit like the Stay Puft Marshmallow Man.

Next, we needed to apply a little pressure. Space suits are meant to provide an earth-like atmosphere in the vacuum that is space, and an important part of that atmosphere is air pressure. Without it, the fluids in our bodies would boil, causing our body parts to swell up. So, essentially, space suits need to be pressurized to prevent astronauts from getting dangerously bloated. To simulate this experience, I turned a black knob on my suit, filling the suit with pressurized gas and raising the suit’s psi. My ears crackled and popped as the suit inflated like a big balloon, and I strutted around the studio feeling a bit like the Stay Puft Marshmallow Man.

Doing pretty much anything in a space suit is hard, given the weight of the ensemble. Just walking around is a chore, and I was basically limited to moving my arms as I stood upright. I could bend over about halfway, but standing back up straight was a bit of a struggle, and when they had me do pushups, I pretty much just fell to the ground. Though that also may be because I lack upper body strength. 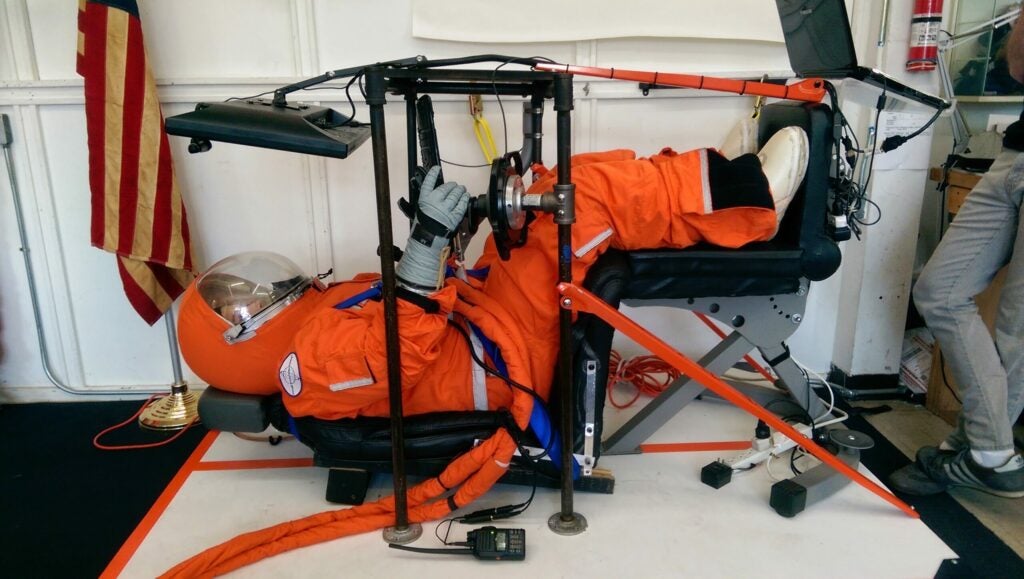 Suited up, I flew a virtual F-16 over Texas and the Moon.

After a few failed attempts at mini golf, I got to test out their rudimentary flight simulator (essentially a sideways chair that looks up at a computer screen of Google Earth). Once I was situated, I used a joystick to fly around my hometown of Friendswood, Texas. That may have been the most difficult task of all. My finger dexterity was all but eliminated wearing those gloves, and trying to shift the joystick gently to the right resulted in my flipping the virtual plane over.

The entire experience gave me a newfound respect for astronauts and their ability to perform complex tasks while wearing those suits. To do any type of controlled movement, astronauts need a lot more muscle strength than I have. Plus, the suit I wore from Final Frontier Design is supposedly more maneuverable than the suits worn by the Apollo astronauts, which means they had even more obstacles to overcome. (Glove design was once found to cause some astronauts’ fingernails to fall off.) But despite these limitations, I loved every second of my space suit fitting, and my heart broke a little when it came time to take it off. Beforehand, Ted explained that putting on a space suit is a very personal experience, and I definitely felt that my fitting was unique.

Of course, I always have the option of purchasing my very own custom space suit — for the fairly economical price of $65,000. Well, Christmas is around the corner… 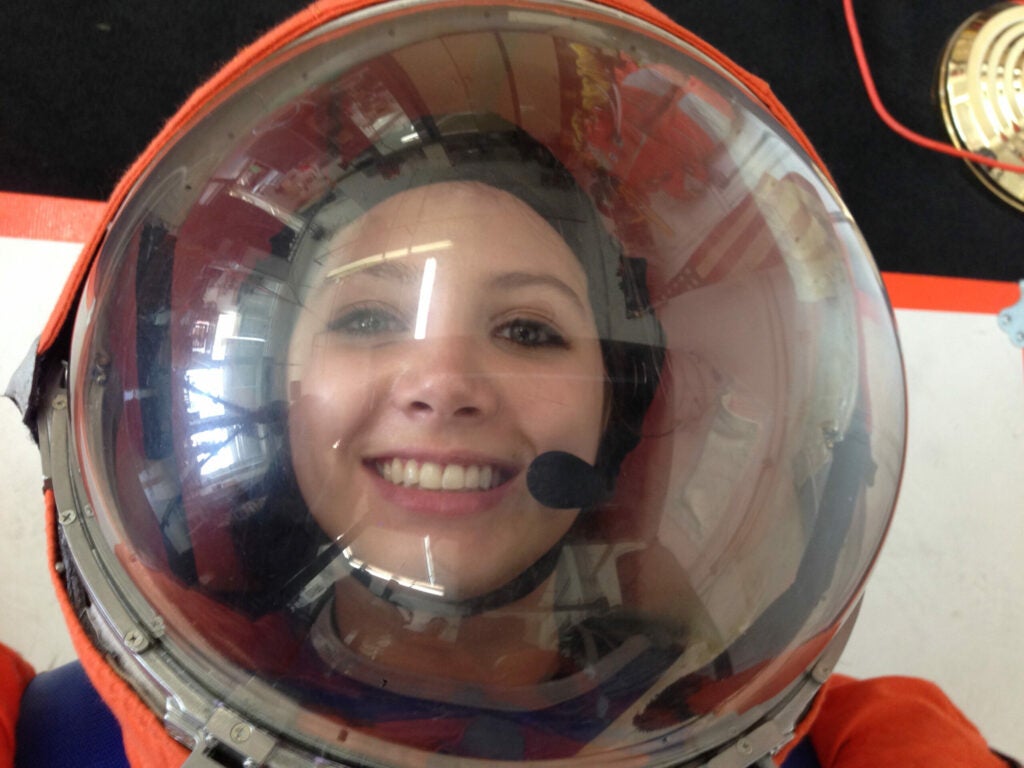 Should’ve been an astronaut