How It Works: The Most Powerful Space Rocket

When the firm SpaceX launches its Falcon Heavy rocket into space late this year, the craft will become the mightiest... 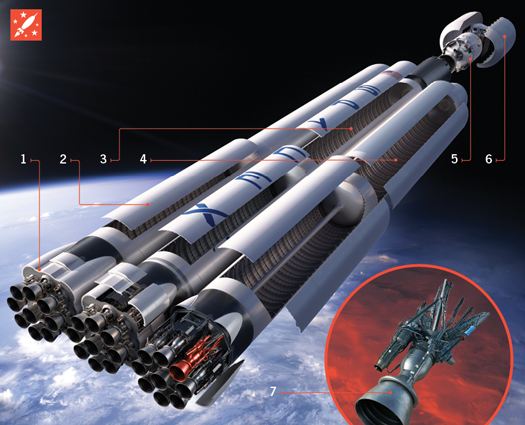 When the firm SpaceX launches its Falcon Heavy rocket into space late this year, the craft will become the mightiest rocket in the world. Only NASA’s Saturn V, which sent Americans to the moon, has ever generated more power.

In rockets, the most important measure of power is thrust. Falcon Heavy’s 27 individual booster engines together generate 3.8 million pounds of thrust—enough to lift the 3.1-million-pound rocket and its 117,000-pound payload toward low-Earth orbit. The rocket’s success is critical for both SpaceX and the U.S. space program: The Air Force has already hired SpaceX and its Falcon Heavy to send two satellites into orbit sometime in 2015. 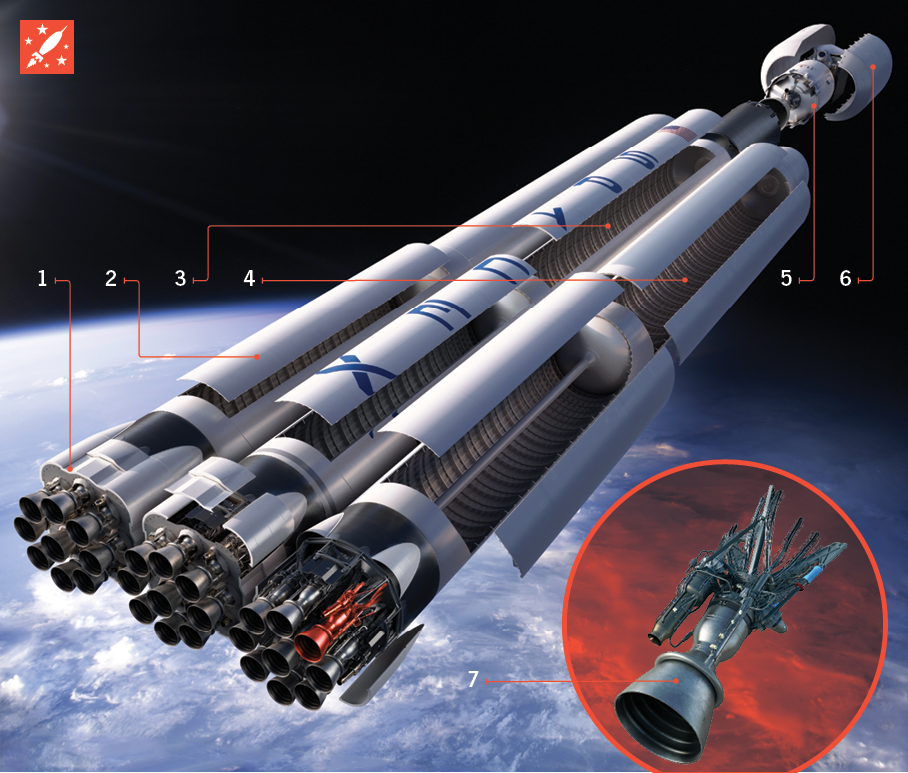 1) ENGINE CLUSTER
Nine SpaceX Merlin 1D engines sit at the bottom of each of the craft’s three cores, or boosters. The engines are identical to those on SpaceX’s Falcon 9 rocket.

2) FIRST STAGE: THREE ROCKET CORES
Falcon Heavy’s first stage consists of three cores. All three cores operate together at liftoff. About T+2:45 minutes into flight, the center core throttles down while the two side cores continue at full thrust until their fuel is nearly spent. At that point, pneumatic separators release the side cores, which plummet into the ocean, and the center core throttles up.

3) CENTER CORE
For payloads heavier than 100,000 pounds, Falcon Heavy uses a cross-feed system to run fuel from the side cores to the center core, leaving the center core almost fully fueled after the side boosters separate. What’s left is the equivalent of a complete Falcon 9 rocket already high in space.

4) FUEL TANKS
A liquid-oxygen tank at the top of each core feeds the engines through a center tube; the lower portion of the tank contains rocket-grade kerosene. The propellants are turbo-pumped into each Merlin engine’s injector, where they are mixed and fed into the combustion chamber.

5) SECOND STAGE
Powered by a single Merlin 1D engine modified to operate in the vacuum of space, the second stage delivers the final push that gets the payload into orbit. The engine can shut down and reignite as needed, enabling Falcon Heavy to deliver multiple payloads to different orbits.

6) FAIRING
Falcon Heavy can carry either a Dragon capsule—SpaceX’s free-flying spacecraft, currently used to resupply the International Space Station—or up to 117,000 pounds of payload (think multiple military and commercial satellites) enclosed in a shell 45 feet long and 17 feet in diameter. The fairing consists of two clamshell-style halves made of an aluminum honeycomb core and carbon-fiber face sheets. When the second stage nears the desired orbit, pneumatic pushers split the halves apart, exposing the payload.

7) MERLIN 1D ENGINE
A single Merlin 1D generates 147,000 pounds of thrust at sea level, burning rocket-grade kerosene and liquid oxygen fed by a turbo-pump into the combustion chamber. Falcon Heavy’s liquid propellant has an advantage over solid fuel: Liquid-fueled engines can stop and restart in flight, whereas solid-fuel engines burn until they are spent. Through proprietary adjustments that SpaceX won’t disclose, engineers recently lightened the engine to increase its efficiency, making it the most efficient rocket booster engine ever built. 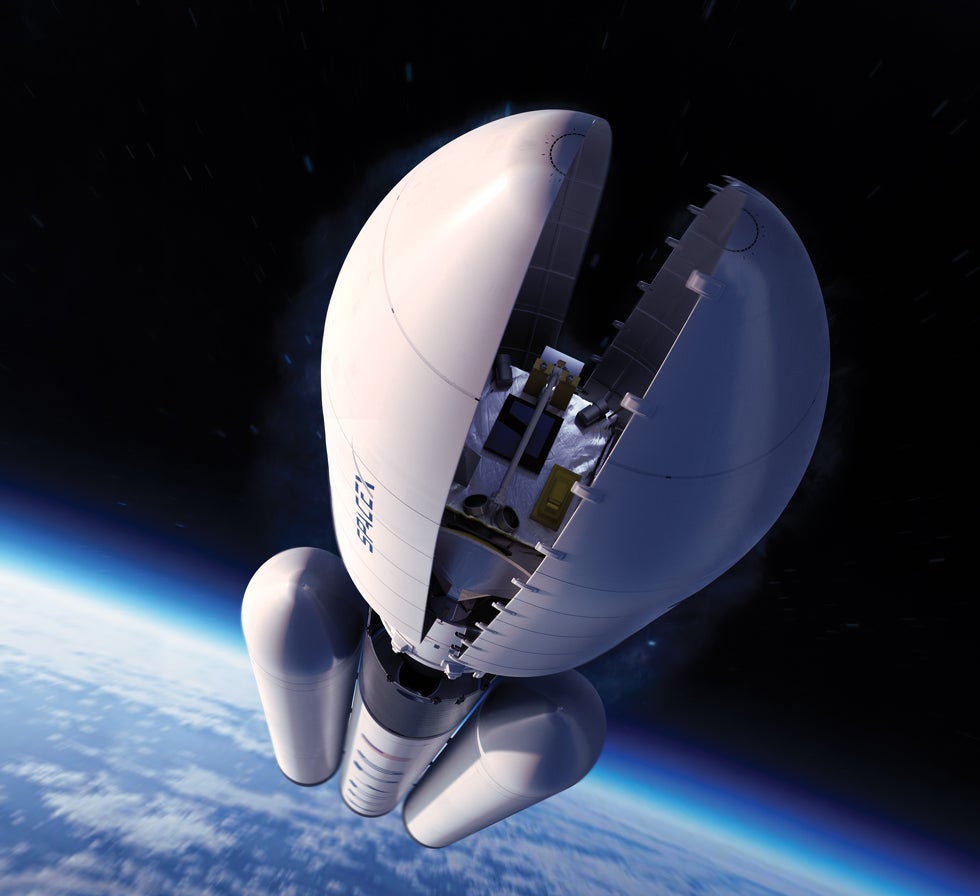 The SpaceX Falcon Heavy will be the world’s most powerful rocket when it launches later this year. It can carry a payload of up to 117,000 pounds in its clamshell fairing. The fairing is shown here open with the payload exposed, but on a mission it would remain closed until the first stage has separated and the second stage has nearly reached orbit.

TIMELINE OF A LAUNCH

T – 3:00:00
Falcon Heavy is ready on the launch­pad at Cape Canaveral. Engineers time liftoff to achieve the optimal flight path and desired orbit.

T – 0:10:30
The countdown begins. All actions from here forward are pre-programmed, although Mission Control can abort the mission at any time.

0:00:00
The onboard rocket computer commands the launch mount to release. Liftoff.

T + 0:02:45
The rocket has now burned enough fuel (thus decreasing its mass) that the center core engines can throttle down.

T + 0:03:00
The side cores separate and fall into the ocean, while the center core’s nine Merlin engines continue to burn for approximately 30 seconds.

T + 0:03:30
The second stage separates from the remaining first-stage core. The second-stage engine ignites and continues toward orbit.

T + 10–20 MINUTES
When the rocket nears the desired orbit, the two halves of the clamshell fairing open and fall away. When in position, the payload separates from the second stage. Both the fairing and second stage eventually fall back to Earth.