Wildfires In Northern California Threaten The Search For Alien Life

As fires rage this week and many evacuate, SETI's Allen Telescope Array has gone offline. 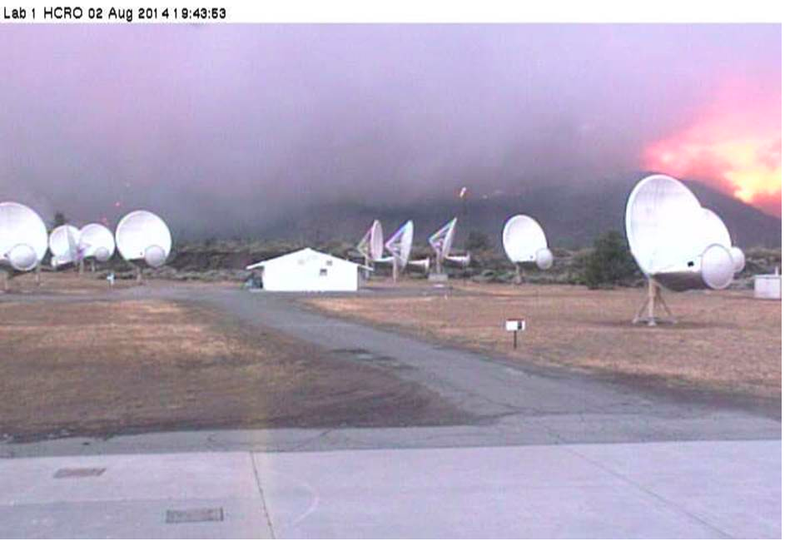 The Allen Telescope Array’s webcam sent this transmission on August 2 at 7:43 p.m., just before the Internet went out.
SHARE

The last transmission from the Allen Telescope Array’s webcam, sent before a wildfire took out the telescope’s Internet connection, looks like the beginning of a found-footage horror movie. Dark smoke rolls toward the telescope’s 42 radio dishes, and the mountainside behind them glows an eerie orange.

Located at the Hat Creek Radio Observatory in Hat Creek, California, the Allen Telescope Array is caught in the middle of two wildfires. The Eiler and the Bald fires, sparked last week, together have torched more than 100 square miles of Northern California. They are just two of more than a dozen fires that began in the state last week when excessive lightning met the drought-dry underbrush.

According to state fire spokesperson Captain Amy Head, 209 square miles have burned since last week. The severity prompted Governor Jerry Brown to declare a state of emergency Saturday. And now FEMA has authorized the use of federal funds to help control the Eiler Fire in particular.

Still only 10 percent contained, the Eiler has already razed eight homes, charred two fire engines, forced towns (and a hospital) to evacuate, and closed the only highway in and out of Hat Creek. In addition to the emotional, structural, and financial costs of such a devastating event, this one has taken a scientific toll, too.

The Allen Telescope Array spends its time detecting radio waves from space and scanning exoplanets for evidence of extraterrestrial civilizations. The SETI Institute, located in Silicon Valley, owns the telescope and hopes it will answer one of humanity’s oldest and biggest questions: Are we alone? But right now, the only answer they’re getting is radio silence. The antennas sit idle, dusted with ash, unable to receive commands, and at risk of destruction. Because the road is closed, astronomers are unable to check on the array’s status. The SETI Institute scientists can only get word of how their telescope’s surviving from U.S. Forest Service Twitter updates and embedded local news reporters, the same way the rest of us do.

At the intersection of US 89 and the turn toward the Allen Telescope Array, astronomers and engineers sometimes stopped for milkshakes at Hat Creek’s only restaurant: the amazing Bar K. Now, all that’s left of Bar K is scorched earth.

According to the latest Forest Service maps, the Eiler Fire’s eastern edge is just 1.8 miles from the Allen Telescope Array. The Bald Fire is just 5 miles to the west. The Allen Telescope Array is in a cleared section of valley, making the probability of damage much lower. Hopefully, the biggest loss at the astronomical site will only be productivity. But California is home to many scientific facilities, and between the earthquakes, the mudslides, the volcanoes, and the fires, there’s always a chance that a multimillion-dollar facility, poised to make a huge discovery, will have to start over.

The SETI scientists and radio astronomers who use the Allen Telescope Array surely get heart palpitations imagining their life’s work going up in smoke. But they know well the fires’ impact here on earth, where terrestrial civilization has been devastated. The Hat Creek Radio Observatory and its personnel have been part of the local community (now all evacuated) since the 1950s.

With 44 percent more acreage already burned in California than this time in an average year, and 58 percent of the state in “exceptional drought,” the firestorm seems likely to continue.

To keep an eye on the Eiler and Bald fires, or any others, visit the U.S. Forest Service’s “Incident” website.

To see satellite-based maps of active fires across the US, check out Active Fire Maps. 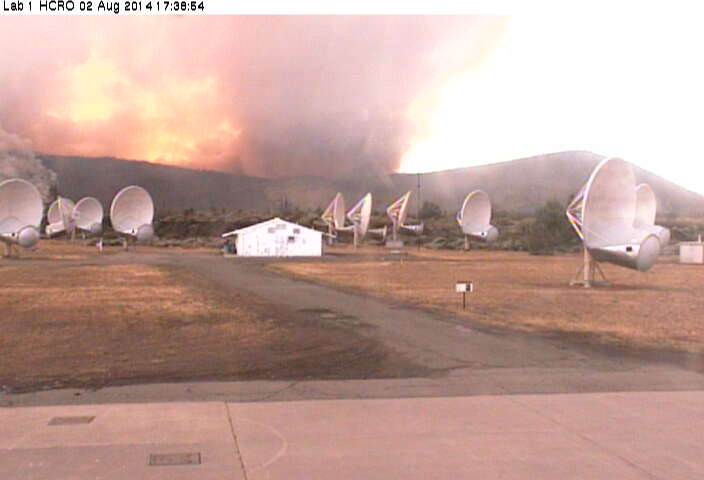 A pair of wildfires is burning near the Allen Telescope Array in Hat Creek, California, seen here a few hours before the webcam’s feed lost connection.
Sarah Scoles