Watch SpaceX Test-Fire Its Spaceship For Astronauts, The ‘Dragon 2’

Gearing up for human flights in 2017 (or later, probably) 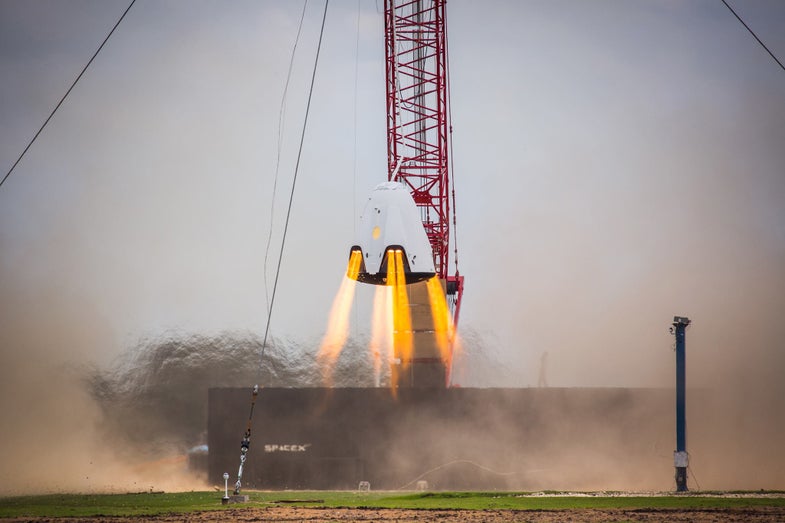 SpaceX's Dragon 2, designed to carry astronauts into space, spews fire during a recent hover test. The company shared videos and images of the test on Facebook on Thursday, January 21, 2016, and is gearing up to begin test flights with humans aboard in 2017. SpaceX/Facebook
SHARE

Full speed and slow mo of our Dragon 2 hover tests

SpaceX may not have stuck its recent ambitious water landing, but Elon Musk’s private rocket company isn’t letting that slow it down. Just a few minutes ago on the official SpaceX Facebook page and YouTube, the company posted the above video and photos of its capsule designed to carry astronauts, the Dragon 2 or Crew Dragon, performing a “hover test.”

While SpaceX has been using the original Dragon to carry cargo into space, the Dragon 2 is meant to carry a crew of up to seven astronauts into orbit and eventually all the way to the International Space Station, as well as to land them safely back on Earth using onboard propulsive thrusters. Those thrusters are precisely what SpaceX is testing, to make sure that they can be switched on-and-off in a reliable and controlled fashion.

In the YouTube version of the video, SpaceX explains that the test was performed on November 24 last year, the second part of two tests conducted at SpaceX’s facility in McGregor, Texas, arranged to satisfy NASA’s Commercial Crew Program requirements:

As for when people will get a chance to ride this thing, that could come as early as next year.

NASA recently revealed a crew of four astronauts that will be the first to ride in a private craft, and placed an order for a human-crewed flight to the International Space Station for 2017, but the agency still hasn’t said which private company will begin flights.

SpaceX and Boeing are the two leading contenders, Boeing with its lesser-known CST-100 Starliner capsule. Earlier this week, NASA published a great overview of what both companies hope to accomplish in space travel throughout 2016 and 2017, and it says very clearly that there are three Dragon 2 flights planned, though when precisely these will take place is not specified. As NASA puts it:

But there are also indications that the ambitious timeline for such a test flight could get delayed until 2018 or later.

Additionally, the initial human-crewed tests of the Dragon 2 won’t rely on the SuperDraco thrusters, but rather more traditional parachute-guided descents into the ocean, according to NASA.

Still, SpaceX is clearly getting things ready for its first unmanned tests of the Dragon 2, as well as the eventual human-crewed missions. That’s exciting in-and-of itself, no matter how far-off the end goal might be. Even creating a craft capable of performing a controlled hover test like this is no easy feat — it is, after all, rocket science.