On Monday, Baumgartner will attempt a record-breaking skydive from 23 miles up. Can he pull it off? And is it just a stunt, or does it stand to benefit science? 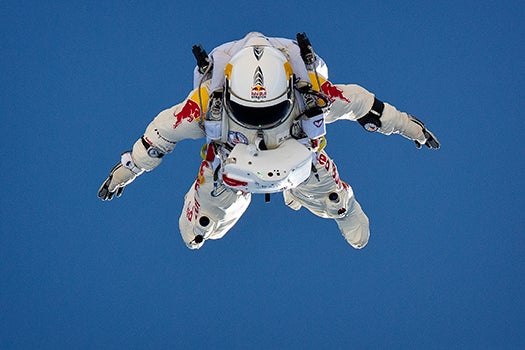 BASE jumper Felix Baumgartner plummets toward Earth in a spacesuit during a test skydive. The grand attempt will be a jump from 120,000 feet. Jay Nemeth/Red Bull Content Pool
SHARE

This weekend Austrian daredevil Felix Baumgartner plans to ride a balloon to the edge of space. Then, after reaching 120,000 feet, he’ll jump into the unknown.

Only pressure chamber tests, computer modeling, and tales of a pilot who survived an emergency ejection at supersonic speeds offer Baumgartner, a professional BASE jumper, and his support team any measure of solace.

But a few things are certain. For a short time inside his pressurized spacesuit, Baumgartner will be the fastest man alive. Thirty seconds after leaping from a small capsule, in fact, he’ll exceed the speed of sound in the thin upper atmosphere by traveling 690 mph. And if he safely parachutes to the ground between 12 and 15 minutes later, he’ll walk away with at least four new world records: the highest skydive, the longest free fall, the first to reach supersonic speeds in free fall, and the highest manned balloon ride.

Energy drink company Red Bull is supporting the Stratos project with an undisclosed amount of money in the tens of millions of dollars (not including an out-of-court settlement for a recent lawsuit that put the jump on ice for more than a year). Project team members, however, insist that their effort isn’t a mere publicity stunt.

“The objective is science. You don’t go into a situation like this to set a record. You go in to get knowledge,” said Joseph Kittinger, a key member of the Stratos team.

In 1960 Kittinger claimed the world record for the highest and fastest skydive in the world (for now). The former Air Force command pilot has not only helped train Baumgartner throughout the 5-year-long effort, but also had a major hand in developing the capsule, its life support systems, and other equipment.

“I think all of us are dedicated toward the science, and none of us would be involved if this was a stunt,” Kittinger said.

When Baumgartner’s deed is done, Kittinger said the Stratos team plans to “share all of the data that we have” with commercial spaceflight companies and NASA. These parties plan to rocket people into extremely hostile environments, the thinking goes, so Stratos’ hard data might help space fliers survive a suborbital calamity.

Collecting data should be the easy part. Safely launching a 600-foot-tall, 30 million-cubic-foot balloon with a human tethered to the end is another matter. 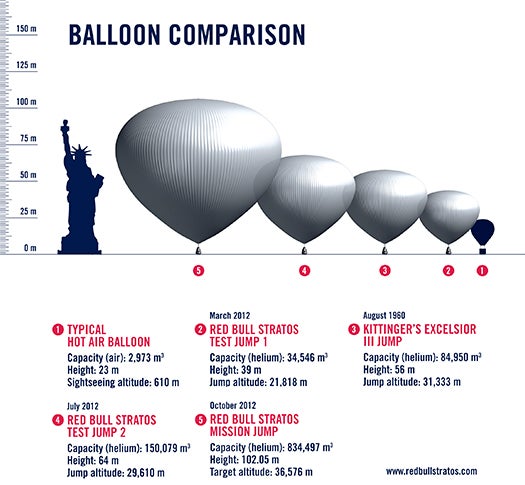 A lightweight yet fragile high-altitude helium balloon will loft skydiver Felix Baumgartner to 120,000 feet during his world record-breaking jump.

RISING TO THE CHALLENGE

Astronomers who loft telescopes to the edge of space with helium balloons know the problem too well. The final launch of the BLAST telescope, for example, nearly crippled the apparatus.

“Everything has to be perfect to launch the balloon. If we’re able to manage that, we’ve accomplished a lot,” Baumgartner said. “Without launching a balloon, there’s no jump.”

Stratos needs to lift a 2,900-pound capsule — plus Baumgartner and the weight of his bulky spacesuit — to at least 120,000 feet. The balloon is made out of a polyethylene material not too different from the thin bags launderers slip over dry-cleaned clothes. Even then, the balloon itself will weigh about 3,000 pounds.

It’s a vulnerable setup: A rogue wind buffeting the balloon’s taut skin could doom the mission. “There’s a big potential that [the balloon] can tear apart,” Baumgartner said.

Stratos is planning its launch attempt from Roswell, New Mexico. The semi-arid region is known for extremely stable weather. Pockets of wind shear during the 3-hour-long ascent could also threaten the balloon, however, so the team will scout with a weather balloon before the master attempt.

Should Baumgartner’s ride pop during the 3-hour-long ascent, his capsule is equipped with an emergency parachute to deliver him to the ground in one piece. That capsule, however, suffered extensive damage after a 97,000-foot jump in August, forcing the mission’s team to replace its outer components (the internal pressure sphere was allegedly unbreached). It’s unknown how the device might fare after falling from 120,000 feet — with or without Baumgartner inside. 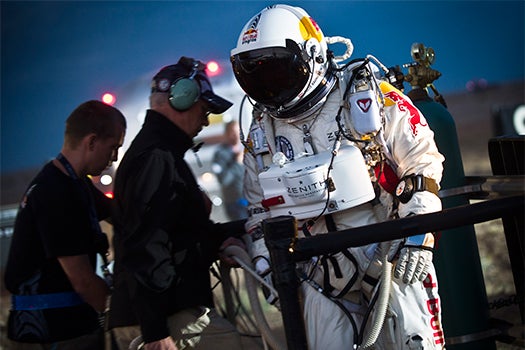 If Baumgartner receives a “go” for jump, a 36-pound spacesuit is all that separates him from a hostile world that would boil water in his flesh. The exposure could lead to ebullism, a lethal condition caused by gas bubbles escaping into the bloodstream.

Thankfully, Baumgartner will wear a chest pack crammed with data-hungry instruments to help ground controllers monitor the space diver and log scientific data. Some will keep tabs on Baumgartner’s vital signs such as heart rate and oxygen intake to see how his body reacts to a boundary no person has broken in a spacesuit (and lived to tell the tale): the speed of sound.

Dr. Jonathan Clark of Baylor College of Medicine, a former space shuttle crew surgeon at NASA, said the team isn’t particularly concerned about the feat itself, which will probably occur around 100,000 feet up. (Baumgartner may not know he’s surpassed the speed of sound, so the suit is even designed to blip out a ring tone if he does.)

It’s the emergent threat of shock-shock interactions, or colliding supersonic shock waves, that’s worrisome. If Baumgartner’s head-first, bullet-like position is compromised during the jump, such aerodynamic heating has the chance to break his suit.

The heating effect rises with increasing supersonic speed. During early tests of the X-15 spaceplane, in fact, hot air penetrated the machine’s skin and “cut through electrical wiring and tubing like an acetylene torch.”

“Shock-shock interaction is in my estimation, the biggest unknown … we don’t adequately understand,” Clark said. “As nobody has done this before, this data will be invaluable in advancing human exploration.”

In addition to beaming down a video feed of Baumgartner’s face (which will help ground controllers assess his health), the chest pack will telemeter GPS location, atmospheric temperature, altitude, inertia, and speed. It will also allow the space diver to communicate with the ground — in particular Kittinger, who plans to coax Baumgartner through every step of the jump.

One of the biggest dangers is a flat spin which, beyond 120 rotations per minute, can knock out the toughest of skydivers. “The possibility of spinning is inversely proportional to altitude. It’s exactly what happened to me,” said Kittinger of one of his project Excelsior space-diving attempts. “The centrifugal force was so great I couldn’t pull my arms in to control it.”

A special drogue chute will deploy from Baumgartner’s spacesuit and help stabilize him if he enters an uncontrollable spin. But if his suit is compromised, he’ll be exposed to deadly low pressure and a lack of oxygen.

“My primary concerns are the things that have killed people in this environment, ebullism and flat spin,” Clark said. 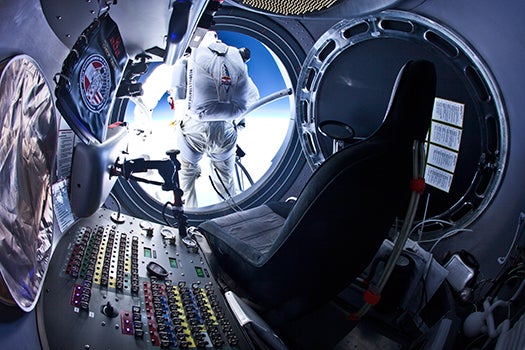 If Baumgartner endures the risky balloon ride and supersonic free-fall, he’ll be left to do what he does best: plummet to Earth, pull the ripcord and parachute to the ground.

“The rest of the free fall part is pretty much like a regular skydive,” he said. “It’s just faster, but you don’t feel the speed because there’s no reference. There’s almost sound up there, so you don’t hear the noise.”

It remains to be seen if the jump is successful and if the scientific data captured during the attempt is valuable to both government programs or commercial spaceflight companies. (Many of the outfits have no plans for a pressurized spacesuit or escape system.)

Regardless, Baumgartner and key members of his team remain determined.

“This is cutting-edge science, this is the modern time of space exploration,” Baumgartner said. “Space exploration is becoming more and more popular and those people … need protection.

“We want to prove to the world that these conditions are survivable. This is where we are kind of pioneers, and hopefully people will use our equipment and our technology in the future.”

Note: This article was first published at Txchnologist.com and adapted with permission.