5 Secrets Of A Successful Space Dive

Yesterday's 23-mile skydive was delayed by gusty wind, but that's just one variable that can shut down a high-altitude ballooning mission. Many people have tried, and failed, to break Joe Kittinger’s record for the highest skydive in the past. Here’s why it’s so hard to pull off—and why Felix Baumgartner just might do it yet. 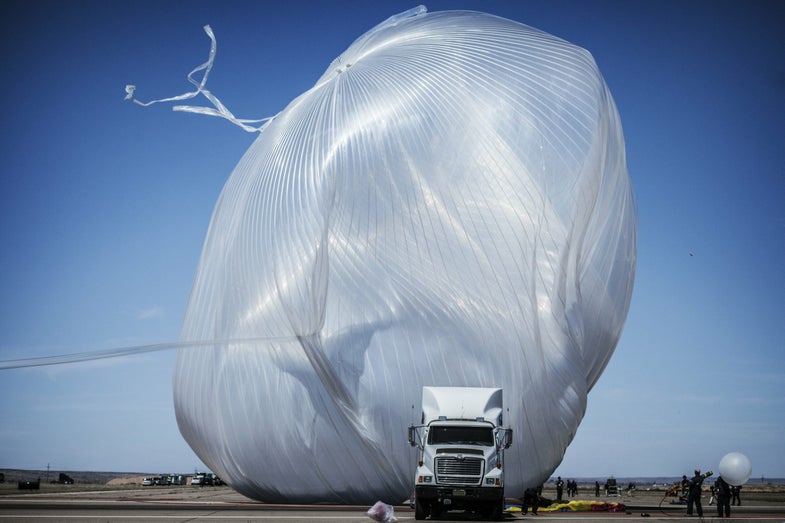 High altitude balloon twists in the wind just seconds prior to its abortion during the final manned flight of Red Bull Stratos in Roswell, New Mexico, USA on October 9, 2012.Â  // balazsgardi.com/Red Bull Content Pool // P-20121009-00088 // Usage for editorial use only // Please go to www.redbullcontentpool.com for further information. //.
SHARE

It’s a massive understatement to say a high-altitude balloon jump–let alone one from 23 miles up–is incredibly difficult. Yesterday’s Red Bull Stratos launch was aborted due to winds that twisted the polyethylene balloon during inflation, and eventually pushed it over so that it touched the ground.

The balloon is extremely delicate—it’s made of polyethylene just 0.0008 inches thick—and so it can be easily stretched and torn. If the balloon had launched and the fabric ripped when the capsule was less than 4000 feet high, it would most likely be deadly: At that altitude, the capsule’s recovery parachute couldn’t fully deploy and Baumgartner wouldn’t have enough time to jump out.

But weather is just one variable that can make or break a project like this. Since Air Force test pilot Joe Kittinger parachuted from 103,000 feet in 1960, many people have tried, and failed, to break his record. Craig Ryan, author of The Pre-Astronauts: Manned Ballooning on the Threshold of Space, has thought a lot about why that’s the case. We spoke with him about what elements must come together for Felix Baumgartner to pull off a successful stratospheric jump.

There are four major types of equipment involved in an attempt like this and they’re all complex: the launch vehicle, the parachute, the pressure suit, and the balloon. For Red Bull Stratos, Baumgartner will ascend to 120,000 feet and then jump back to Earth—if all goes as planned, reaching supersonic speeds during the descent. Kittinger caught a ride in an open gondola, but Baumgartner’s going 20,000 feet higher and so he needs extra protection from the near-vacuum conditions. A custom capsule and parachute have been engineered to prevent him from getting decompression sickness on the way up and potentially spinning out of control on the way back down.

A pressure suit is also crucial gear. Russian parachutist Pyotr Dolgor died after his suit decompressed during a 93,970-foot jump in 1962; he had damaged it as he exited the craft. (Above roughly 63,000 feet, water vapor bubbles out of bodily fluids, and oxygen rushes out of the lungs.) Few companies make pressure suits and, as aspiring high divers have found, they are difficult to acquire. The David Clark Company, which manufactures NASA’s spacesuits, agreed to engineer a suit for Baumgartner with extra mobility in the joints for skydiving—but it has turned away countless such requests in the past.

The most problematic technology for high-altitude missions, as we saw yesterday, has been the balloon envelope. It’s as thin as a dry-cleaning bag and as big as a football field, and very few people know how to build them. “Getting a balloon that can actually take you up to above 100,000 feet is a tricky business,” Ryan says, “and a number of the projects have failed due to balloon failure.” Three attempts by French parachutist Michel Fournier ended because of balloon troubles: In 2002, wind ripped away the inflation tube, and in 2003 the balloon burst. Five years later, the balloon separated from the capsule as it left the ground, leaving Fournier on the airfield. Baumgartner’s balloon is more than 29 million cubic feet in capacity—10 times the size of Kittinger’s and three times the size of Fournier’s—and once inflation has begun it can’t be reused.

Just as there aren’t a lot of manufacturers for such technology, not many outfits specialize in launching a high-altitude balloon—and certainly not a manned one. Most such projects were scientific programs run by the Air Force or Navy, and they took place in the 1950s and ’60s. “There’s not a lot of people around who have ever done this before,” Ryan says. “It’s somewhat analogous to the trips the U.S. made to the moon in the 1960s and early ’70s. If we were going to go back to the moon today most of the people who were involved in it are quite elderly or just gone. Kittinger is the exception.”

After setting the record for the highest freefall during Project Excelsior in 1960—a record he still holds—Kittinger became the first person to fly solo across the Atlantic in a helium balloon. He, too, was asked many times to support high-altitude skydives; until Red Bull Stratos, he turned them all down. It was the caliber of that team—which includes experts in aerospace, life support, space medicine, skydiving, and flight testing—that convinced him to sign up. “I’ve never had anybody [approach me] with a professional group like Red Bull that knew what they were doing and didn’t want to cut corners,” he says.

Art Thompson, vice-president of Sage Cheshire Aerospace, helped Baumgartner assemble the team, and as technical director he oversees the test program that built over the last few years toward this week’s culminating dive. “One of the things that has allowed us to gather the experts we have, and work with the level of people we’re working with, is that they perceive us to be very serious about what we do,” Thompson says. “It’s definitely not a stunt.”

“This is crucial, and it gets to one of the reasons I think Joe’s project was successful,” Ryan says. “You really need operational discipline, and somebody who is ultimately responsible for the program who has the authority to ground a flight if things are not right.” That was the element American skydiver Nick Piantanida didn’t possess. He had the technology: South Dakota-based Raven Industries, which set an altitude record for scientific ballooning in 1960, supplied his balloon, and David Clark provided his spacesuit. His team had expertise. But Piantanida died in 1966 after ascending to 57,600 feet and, Ryan believes, opening his faceplate to either defog it or get a blast of cold air. “He was a very gutsy guy,” Ryan says—but he didn’t have experience running a project or the discipline to properly prepare for the flight.

Fournier’s team also lacked leadership: During his most recent attempt, in Saskatchewan in 2010, his French support team and American balloon team communicated poorly. Then, with the balloon on the tarmac and partially filled, Fournier’s reserve chute popped open in his capsule during a pressure test, causing the launch to abort. The French team wanted to press on despite bad weather and a compromised balloon envelope. Frustrated by such technical failures and lacking confidence in Fournier’s countrymen, the balloon team decided to return to Texas early.

“[Leadership] is what Joe and the military structure brought to Project Excelsior,” says Ryan, who also co-write Kittinger’s recent autobiography, Come Up and Get Me. Kittinger has applied similar discipline to Red Bull Stratos. During a recent press briefing, Thompson had this to say: “We’ve got an incredible team of scientists and engineers who put together this program, and I don’t think there’s anybody who worked as hard as Joe. He sits in the capsule sometimes for hours, just thinking through the process, looking at the switch panels, looking at the instrumentation, making notes. He comes back and says, ‘Art, we need to change line 32.’ Joe’s been amazing at taking all of his experience and expertise and combining them to really help Stratos happen.”

The biggest difference between Kittinger’s successful jump and subsequent attempts, Ryan says, is that Project Excelsior had a clear, justifiable, and urgent mission: to prove that pilots could safely escape from super-high-altitude vehicles. This was especially relevant because jets were becoming increasingly high performance and Project Mercury would soon send men into space. “None of the civilian programs that came after had that urgency of mission,” Ryan says. “Most of them have tried to manufacture a mission and it usually involved some kind of scientific agenda, but nothing to the degree that Excelsior had.”

Red Bull Stratos has a scientific agenda that is unquestionably daredevil as well. “We don’t know what a human endures as he accelerates through the sound barrier without an aircraft,” says Stratos medical director Jon Clark. They plan to find out. Baumgartner wil jump from 120,000 feet into a near vacuum; for the first 20 seconds he will have no control. Then he will try to assume a Delta, or 45-degree, heads-down, position that will reduce drag and increase his speed to nearly 700 miles per hour. At 30 to 40 seconds, Clark projects, he will break the sound barrier. There is one case of an SR-71 Black Bird pilot who went from supersonic to subsonic as his plane broke up over southern New Mexico while going Mach 3.2. But no one has every gone from subsonic to supersonic and back again.

Kittinger’s Project Excelsior skydive, which tested a partial-pressure suit used by high-altitude pilots, is the reason NASA’s launch-entry suit for astronauts is rated to 100,000 feet. If Baumgartner is successful, full-pressure suit certification would likely increase by another 20 percent. That would also be of value to commercial companies now planning suborbital flights. “They’re playing in the area that we’re in,” Clark says, “and if they had a problem, especially during their test flights, and needed an ability to escape, they would now have a system that would be demonstrated to be effective.” The Stratos team is also developing treatment protocols—such as what to do if a pilot has been exposed to a vacuum or extreme cold—that will have applications in emergency medicine.

Bringing all of these elements together is an expensive undertaking. “It’s been hard for people to find sponsorship for these kinds of programs because of the potential for tragedy,” Ryan says, “or of the potential for this thing not to work and be an embarrassment. I’m kind of glad to see a company willing to get involved in something like this.” Red Bull won’t reveal how much it’s spent on the Stratos program—which included a lawsuit settled out of court in 2011 that was pressed by a man claiming the company stole his idea. But it’s not out of step with other highly ambitious—and, most notably, successful—exploration mounted by private industry this year.

In March, director James Cameron became the first person to dive solo to the deepest point in the world’s oceans, the Challenger Deep in the Mariana Trench, and the first to guide a submarine there at all since the US Navy Lieutenant Don Walsh did so in 1960. In May, SpaceX’s Dragon capsule became the first private craft to dock with the International Space Station, and on Sunday, the company launched the first commercial resupply mission. Clark points out these were all ventures once carried out governments. “What you’re seeing is not one-off events,” he says. “You’re seeing the development of things that will be entrepreneurial exploration across the board.”

So what of Felix Baumgartner’s chances of successfully setting a high-altitude freefall record? “This is hard stuff to do,” Ryan says. “It’s really difficult. There are a lot of moving parts to make this whole thing come together.” The weather, for one, looks like it has launch potential on Thursday. And Stratos meteorologist Don Day notes that, with a balloon this big, they need to take their opportunities because the right weather doesn’t come along very often. Between 1966 and Baumgartner’s 71,581-foot training jump in July, not a single high-altitude manned balloon flight even left the ground. “If they get off the ground,” Ryan says, “they have a really good chance of success.”