How Many Ballots Do You Have To Count To Know Whether An Election Was Rigged? 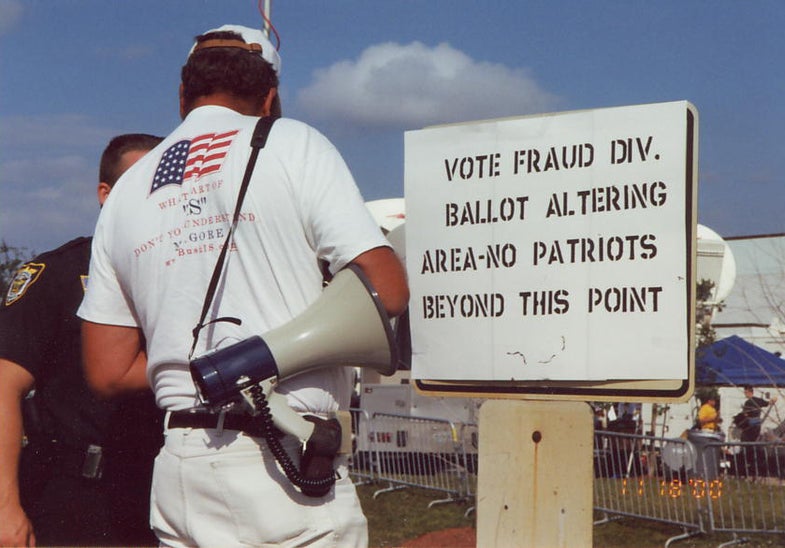 This election day, American voters will decide the futures of all 435 seats in the House of Representatives, as well as 36 in the Senate. Thirty-six states will choose their governors, and 87 of 99 state legislative bodies will hold votes on their hundreds of members. That’s a lot of voting, a lot of happy winners, and a lot of unfortunate losers.

It’s easy to imagine that at least some of those losers will suspect funny business at the voting booths. Identification rules at play in 2014 address the specter of fraudulent voters, but history shows that candidates have much more to fear from faulty or rigged ballots (just ask Al Gore).

When a U.S. election is challenged, the response is often a full recount of all votes cast. But recounts fail too — and losers don’t really care about exact numbers, Phillip Stark, an expert in statistical vote monitoring, tells Popular Science.

Imagine in an election of 1,000 voters, you just lost your deputy dog catcher race 299-701. But scandal strikes: a video reveals the town ballot-counter rushing on the day of the first count. A recount reveals a disparity: you didn’t lose 299-701, you lost 300-700!

When votes cast are checked against votes counted, you inevitably find at least one error, in even small samples.

But sitting back in your chair at the campaign headquarters, staring up at the shrunken, sagging victory balloons you never dropped from the ceiling, you think: What’s the point? The counter went through all that extra trouble and you still miss out on the fat paycheck and the glory of netting wayward hounds.

If, instead of secretly recording the ballot-counter and forcing a full recount (which can take weeks in larger elections), local officials had just checked up on the election to probe for errors, you might be satisfied, and voters could be more confident in the whole system.

Statistically speaking, the town council could have ordered just 100 ballots randomly recounted out of the 1,000. If the election was honest, then about 70 of those ballots should go to your opponent, and 30 to you. Even a sample of 20 that produced 6 for you might be reassuring, and would provide a huge benefit of election security with minimal effort. You just have to ask yourself how sure you want to be you before you’ll accept that you lost, even if you do encounter problems.

When votes cast are checked against votes counted, Stark says, “You pretty much inevitably find at least one error”, in even small samples. A method he developed along with other experts anticipates those errors while still producing strong reassurances for candidates and voters.

This process is called a Risk Limiting Audit. The best audits, in place in some states, use truly random population samples and only count vanishingly small portions of the total vote count. The larger the difference in reported results, the smaller the size of the audit necessary. Legislators need only to decide, as a percentage, how confident they want the auditors to be when they report their results. The auditors then count ballots until they reach that mathematical certainty. Stark says in a national presidential election, auditors should only have to count about 250 ballots per state to be 90 percent sure the results are reported properly. (If you like high-level math, you can find a more rigorous explanation of the statistics here.)

Of course, the world and its bureaucrats have a habit of complicating matters for auditors. Stark says most states do terrible jobs of storing and accounting for ballots after elections, introducing statistical noise to the audit. In other states, legislators handpick a county for an audit, disrupting the necessary randomness. Still, election monitoring moves forward. In the future, better voting machines that incorporate audits right into their systems could help in the fight against fraud. One such machine could appear in Austin, Texas, in coming elections.