NASA: Ganymede Has A Saltwater Ocean

The water worlds in our solar system are adding up 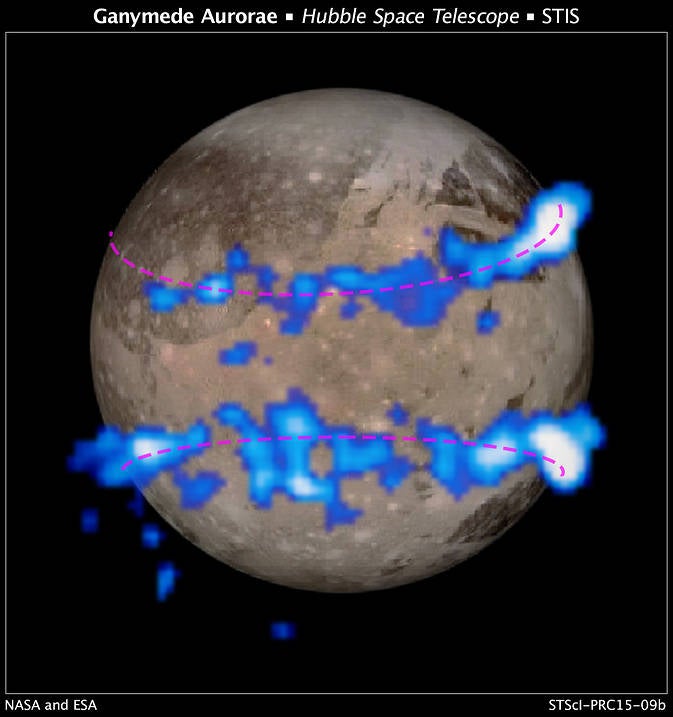 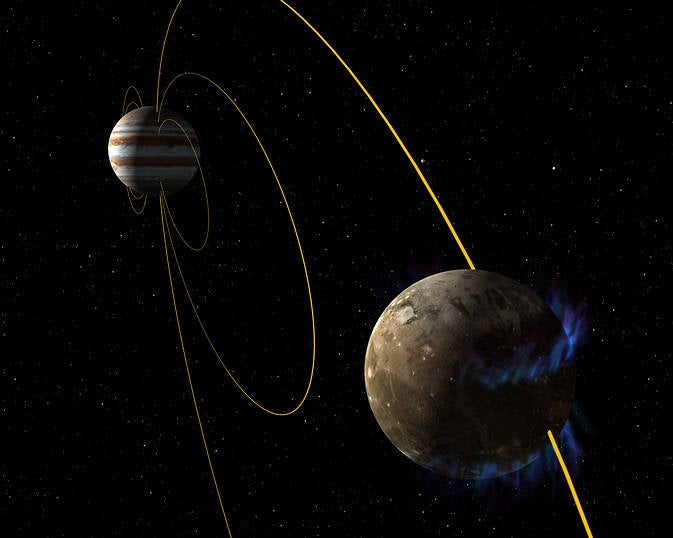 An artist’s illustration of Jupiter, with its moon Ganymede (with aurora visible). The yellow lines indicate Jupiter’s magnetic field.

NASA announced today that researchers using the Hubble space telescope have detected the presence of a saltwater ocean on Ganymede, Jupiter’s largest moon.

Scientists speculated for years about the existence of a liquid ocean under the icy surface of the moon, and geologists even mapped Ganymede’s rocky exterior to get a better idea of its features. But until now, they weren’t completely sure what was under the crust.

The key to NASA’s recent conclusion was Ganymede’s vivid aurora, which was first observed in the 1990s. Ganymede’s aurora occurs in two belts near its magnetic poles, just like the auroras on Earth. And just like our planet, scientists believe that Ganymede has an iron core, which produces a magnetic field. When a planet or moon’s magnetic field interacts with gasses in the atmosphere, auroras thrive.

According to researchers, Ganymede’s light show would make for a spectacular view. “If someone was standing on Ganymede looking up it would be a red aurora” lead scientist Joachim Saur said at a NASA press conference. Ganymede also has to contend with the magnetic field of Jupiter, which causes the auroral belts to wobble back and forth. But Saur and his team realized that the aurora wasn’t fluctuating as much as it should be, given Jupiter’s influence. 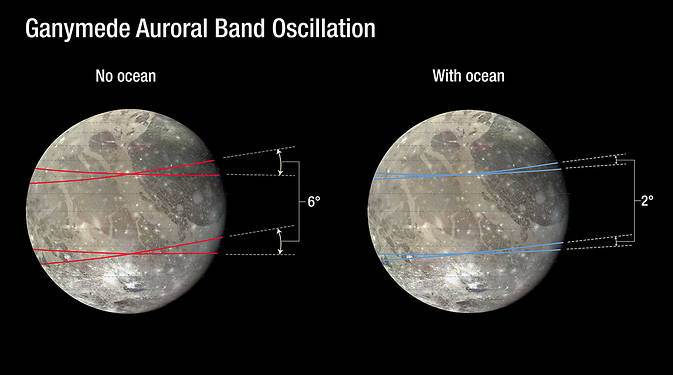 The reason for the minimal wobble? Saur believes there’s a saltwater ocean buried less than 200 miles under Ganymede’s surface. The idea is that liquid saltwater conducts electricity, and when it interacts with Jupiter’s magnetic field, it acts like an electromagnet, creating a secondary magnetic field that opposes Jupiter’s impact. This keeps the auroras relatively steady.

The news of Ganymede’s ocean comes one day after scientists published results indicating that Saturn’s moon Enceladus has a warm ocean buried under its icy crust. Similar announcements and discoveries are soon to follow as researchers continue to use techniques like this one to peer into our solar system. And the future, more powerful telescopes could be used to examine auroras on exoplanets, looking for similar variations that could indicate liquid water around other stars.

But in the meantime, missions like the European Space Agency’s Jupiter Icy Moon Explorer (JUICE) could give us an up close and personal look at Ganymede and his cousins. “There’s a lot of places in the solar system left to explore,” Hammel says. All that’s left is for us to get to them.