Sometimes the most unusual things are rolling in the background during an awkward pause. The common tumbleweed, otherwise known as... 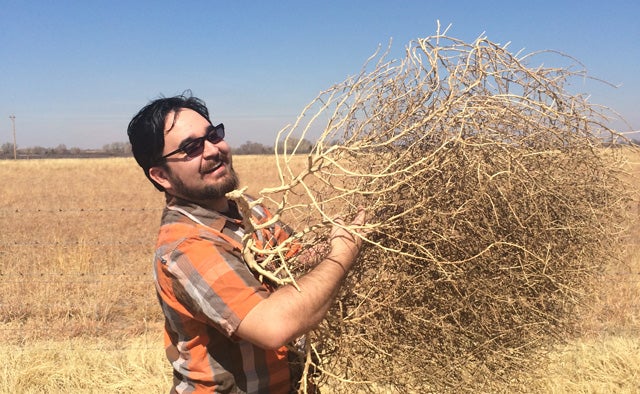 Sometimes the most unusual things are rolling in the background during an awkward pause. The common tumbleweed, otherwise known as the Russian Thistle, is a staple of western American imagery. They invoke a sense of emptiness and carry with them the sound of a hollow wind. Who could have known that they came from Eurasia?

Tumbleweeds are a type of plant that include many different species, and have one thing in common: They break free of their roots and roll around in the wind. When a seed uses a bit of plant tissue to aid in its dispersal, it’s called a diaspore. In the tumbleweed’s case, the whole plant is the diaspore. Tumbling across the open plain or along dusty dunes is a brilliant dispersal strategy, and has caused the tumbleweed to spread across to every corner of mid to western America since the 1870’s when it was first introduced.

Cut to a few weeks ago on my first cross country road trip. Being my first time seeing the Midwest, I was taking in the beautiful flatness of the landscape and how fluffy all the fields looked when Buffalo Bill pointed to the cattle fences that lined the highway.

I perked up, “I’ve never seen one before!” and I was struck by how many of them had gotten caught in the barbed wire of the fence after having been blown across the road.

If you’ve never seen a tumbleweed up close, it’s nothing too remarkable. Dry and worn smooth by the wind, they look like any desiccated shrub. But even a large specimen like the one we found was incredibly light and had no trouble catching a gust, forcing us to hold on tight lest it continue its journey across the plain. As somebody who is a fan of cinema and comedy, seeing a tumbleweed up close was a special experience. I’ve included links to some of the things talked about in the comic below. See you space cowboy!