The news isn't great, but it's not a showstopper either. 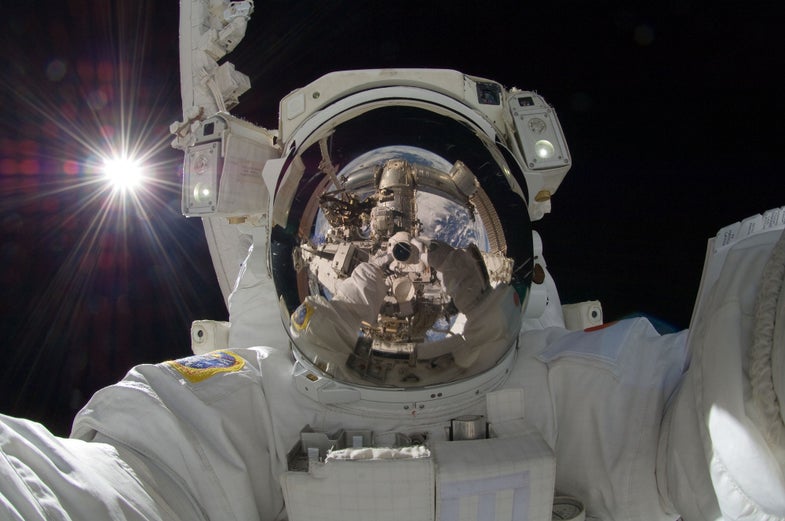 Visiting Mars is dangerous. Astronauts will have to survive six months in deep space to get there, a year and a half on the surface before they could feasibly take off for Earth, and another six months traveling home. That’s two and a half years cut off from Earth’s bountiful resources, so the first crew will have to pack a lot of oxygen and water, top-notch CO2 scrubbers and urine recyclers, and tons of potatoes.

There are the softer risks too, ones that can damage health but aren’t necessarily fatal right away. Will all crewmates be psychologically up to the challenge? What will years of low gravity do to bone density? And then there’s radiation, the energetic particles that fly in from intergalactic space and the sun. Earth’s magnetic field protects us from the worst of it, but out in space it’s much easier for those whizzing bits to bury themselves in our bodies where they can break DNA strands, increasing a person’s chances of developing cancer.

On Wednesday, the European Space Agency announced how much radiation their ExoMars Trace Gas Orbiter had picked up during its six-month journey from Earth to Mars in 2016. During that time the uncrewed spacecraft encountered about 30 percent of the career limit of radiation for a European astronaut. That means anyone on a round trip to Mars is signing up for a minimum of 60 percent of what the ESA considers acceptable over the course of their lifetime, not counting time spent on the surface, where the radiation risk is about half what it is in space. The ESA’s announcement of 60 percent certainly sounds scary, but what does it really mean in terms of health risk? Past NASA research can help put it in perspective.

Units for measuring radiation abound—a constant favorite is the BED or Banana Equivalent Dose, where one unit is equal to the amount of radiation you get from eating a banana. But the unit space agencies care about is the millisievert (mSv), because it aims to capture the health risk of radiation. One sievert, or 1000 mSv, of radiation corresponds with about a 5 percent increased lifetime risk of developing cancer.

Coincidentally, NASA has been estimating that its two- to three- year plans for a crewed Mars mission also involve about 1000 mSv of radiation for each astronaut, putting that number on educational documents at least as far back as 2008. The figure is high enough to be a concern (new technologies such as nanotube shielding and ice domes aim to bring it down), but not necessarily a show stopper since it’s right at the limit of what NASA can stomach, bureaucratically speaking.

The maximum amount of radiation NASA allows an astronaut to be exposed to over the course of their career depends on age and sex, ranging from 1000 mSv for a 25-year-old woman to 4000 mSv for a 55-year-old man. The policy’s goal is to keep the astronaut’s lifetime risk of dying from cancer (not just getting cancer) from rising more than 3 percent. And that’s 3 percent on top of the already high risk for the typical earthling: 40 percent for developing cancer, about 20 percent for dying from cancer, according to the American Cancer Society. The ESA is even stricter, capping career exposure at 1000 mSv for all, regardless of age and sex.

In 2014, NASA updated its estimate with some cold hard numbers based on the rover Curiosity’s experiences traveling to and traipsing around Mars’s surface. The probe estimated that astronauts would get 300 mSv during the six-month trip to the Red Planet, about 400 mSv living on the surface for 18 months (the planet below blocks at least half the radiation), and another 300 mSv on the return trip for a grand total of about 1010 mSv—right on target.

No doctor would recommend soaking up more than 300 mSv each year for three years, but it’s also far from a death sentence. After all, we all receive radiation from naturally radioactive elements in our environment (such as the potassium in bananas) every day. Here in the U.S., we get about three millisieverts each year. Flight attendants live with five millisievert. People who work in nuclear power plants are allowed 20 mSv of annual exposure, and the residents of Ramsar, Iran, who build their homes from a local, radioactive limestone live their entire lives with a whopping 250 mSv annual dose. Fortunately, and inexplicably, cancer there occurs at similar rates to nearby areas, despite background radiation approaching that of the Martian surface.

The ESA hasn’t yet released specific numbers for ExoMars’s measurements, but 60 percent of their stringent guidelines suggests about 600 mSv for the round trip. Add 400 mSv for the time on the surface and we’re back to a mission profile of about 1000 mSv over three years—the magic number on the edge of what’s acceptable for both agencies. Getting a full career dose in just one long mission could mean a mandatory retirement from further space travel, but after spending a year and a half exploring Mars, it’s possible that some astronauts might be ready for a terrestrial life.

NASA and the ESA will continue developing technologies to protect astronauts from radiation as they continue to push out into space. But even at this early stage, the background radiation for would-be Martian mariners over the course of a well-timed, lightly shielded voyage doesn’t seem to be too different from what current astronauts are allowed to experience in low-Earth orbit on the International Space Station. And there’s no shortage of applicants for that job.