Professional designers explain why the Space Force logos are no good

You see stars. They see worrying signs of confusion. 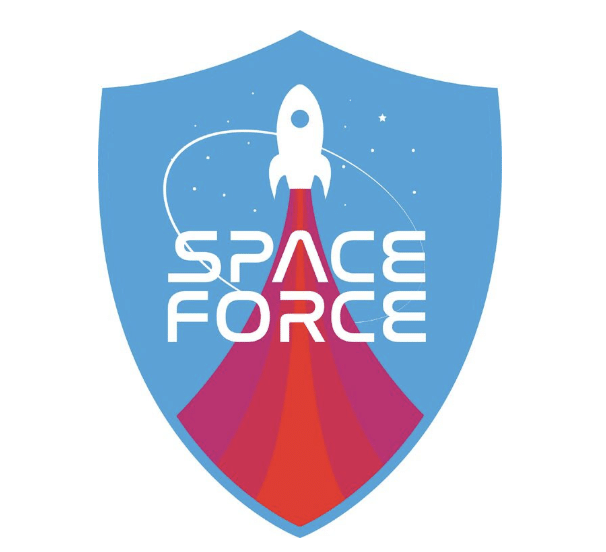 In June, President Donald Trump called for the creation of a sixth branch of the U.S. military. To the Army, Navy, Marine Corps, Air Force, and Coast Guard, he hopes to add… the Space Force.

On Thursday, Vice President Mike Pence and U.S. Secretary of Defense James Mattis held a press conference at the Pentagon to discuss their vision for the Space Force. With the announcement came some visual aids: six potential Space Force logos. It may have seemed a minor point in the morning’s proceedings—who cares about color choice when the militarization of the moon might be on the table!—but designers say the images could offer insight into the current state of the project and what’s to come, whether they end up on official uniforms or serve as simple marketing tools.

“Whenever you create a new identity, you’re signaling something,” says Jesse Reed, co-founder of the design firm Order and the Standards Manual publishing project, which has brought technical design documents, like those guiding graphics at NASA, the EPA, and the New York City subways out of the shadows and onto coffee tables across the country. “Whether that’s a new idea, a change in leadership, or a new way this company’s doing something, you can sign that through visual design.”

In 1975, for example, designers Richard Danne and Bruce Blackburn won the competition to design NASA’s visual identity. Where the Space Force intends to bring military politics, strategy, and perhaps even weapons into space, NASA and peer space agencies in dozens of countries peacefully probed the cosmos. Their concept, commonly called “the worm logo,” centered around a stylized version of the letters N-A-S-A depicted in a simple red zigzag. “It really is a quintessential identity mark,” Reed says. “It’s very simple, it’s easy to draw, it’s easy to identify. Anyone could create these—maybe not in a perfect rendition—but it’s clear.”

The worm complimented NASA’s other icon: the star-spotted blue circle known as “the meatball.” “The meatball was derived from something that was already part of the NASA visual language—it was the NASA seal,” Reed says. “It really is meant for something to go on the arm of a uniform, on maybe very high-level communication materials, as literally a seal of approval that is a little more historical in nature.” Reed compares the two graphics to a university mascot, running around at football games, and the elegant seal on your diploma.

The worm provides “a quick read” and some good marketing material, the meatball; despite its name, signals seriousness and sophistication.

Reed’s historically-informed expectations suggest a central problem with the Space Force logos is memorability. “Really none of them are good,” he says. “Obviously, that’s a very subjective point of view, but from a designer’s perspective, if you’re creating an identity… you really want them to be memorable. And for things to be memorable, you want them to be understandable and simple so that anyone with any educational background or language background can understand what they’re seeing. All of these are very complex. They’re more illustrations than they are logos.”

The first design is a rip-off of both of NASA’s logos, says Reed. It even copies the two forking lines which original meatball designer James J. Modarelli intended to represent a supersonic wing model used in early wind tunnel testing. While Reed says most contemporary design is derivative of some earlier artistry, this logo’s reliance on historical analogs goes much further. “I see it as a lack of confidence and really a lack of building something new,” Reed says. “This one just looks like, ‘We don’t really know what we’re doing, so we’re going to take two old things and put them together like they’re new.'” (The third logo, which depicts a starscape encircled by swirling red jet streams, also draws heavily on NASA’s iconography, especially its color scheme.)

The other designs have also engendered criticism, both online and off. Miriam Kramer, science editor for Mashable, noted that the red planet seemed misplaced in this graphical lineup. “Cute, but like… The Space Force would have literally nothing to do with Mars?” she tweeted. “Unless… I guess we could go to war with Martians, then this this logo might be relevant.” And one PopSci editor said the fourth logo looks like it “was designed by Lisa Frank.”

For his part, typographer Chester Jenkins said the proposals ranged from “insulting to laughable.” “The other logos all seem to have been put together with clip art components. The rocket ships are comical, as are the flame/thrust elements,” he wrote in an email. “One logo states that ‘MARS AWAITS’ in Futura—a classic typeface from 100 years ago—on a design which might be a background from Two Dots,” a puzzle game for smartphones.

For Reed, these reactions reveal a fundamental flaw with all of the designs: they’re too trendy. “The less sort of style and expression you have within that mark, typically the longer it has a shelf life,” he says. “With most of these, I think in a few years, they will either look dated or really bad or very trendy. And then this whole [design] process needs to start over again.”

The future of the Space Force does not rest on its logo, but on Congress, which must approve the creation of a new branch of the military—and fund whatever results. But the visual identity of this proposed branch matters nonetheless. “I am left wondering about the purpose of Space Force,” Jenkins wrote. “Is it a new arm of the military? Is the U.S. going to defend outer space from other countries’ space forces? Are we annexing Mars? Are we getting ready to fight off any intergalactic baddies who show up in our neighbourhood?” For now, Reed says the designs “lack a clarity and focus”—much like the Space Force itself.