Nuclear reactors the size of wastebaskets could power our Martian settlements 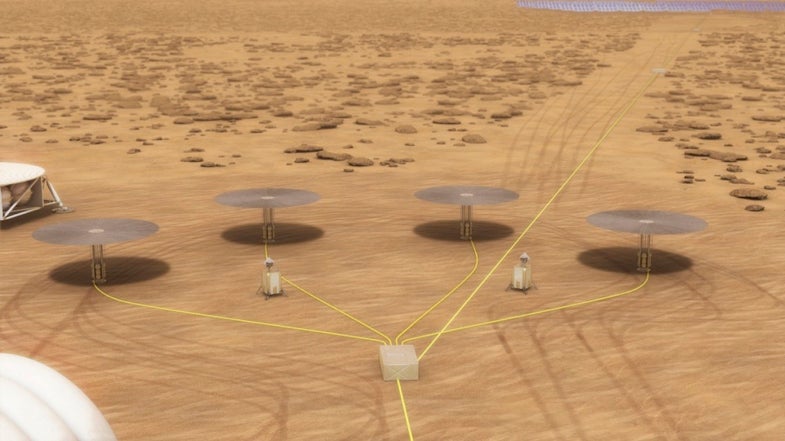 The cylinder of uranium is the size of a coffee can. Even with its shielding and detectors, the device is still no larger than a wastepaper basket. But this little prototype, soon to be tested in the Nevada desert, fuels a dream of an off-world future for humanity.

The Kilopower project, a joint venture between NASA and the Department of Energy, is set to be the first nuclear fission reactor to reach space since the SNAP 10A project in the 1960s. A prototype is in testing, which makes it closer to launch than any of the other projects that popped up in the intervening decades.

The Kilopower reactor is designed to operate at two sizes, a one kilowatt (1,000 watt) model and a 10 kilowatt model.

“Your toaster uses about a kilowatt,” Pat McClure, Kilopower project lead at Los Alamos, says with a laugh.“In your average household, you use about 5 KW on average a day, at any given time. Realize, though, that this is a lot of energy for NASA. At NASA they’re used to tens to hundreds of watts. So to have a kilowatt or 10 kilowatts is a lot of electricity.”

NASA’s New Horizons mission has a maximum power of 240 watts, and the power source on the Curiosity rover only provides 120 watts of electricity. Both of these are so-called nuclear batteries, converting heat from naturally decaying plutonium directly into electricity. But plutonium is in short supply, and 1,000 or even 10,000 watts is a big step up from what those power sources could pack, even if it’s small compared to our power needs here on Earth. Unlike those nuclear batteries, Kilopower’s system creates a fission reaction, splitting uranium atoms to release energy that is then converted into electricity by attached engines.

Not your standard reactor

“A traditional light water cooled reactor makes a gigawatt in electricity. It’s a million times bigger, it’s very complicated, and it’s designed so it utilizes the fuel very well,” McClure says. At the size of the little Martian reactor, things get a lot less fuel-efficient. “But we do have a reactor that is very easy to predict, easy to operate, and in fact can control itself,” he says, which cuts down on the likelihood of accidents that might loom over a bigger power source.

In other words, we’re not risking a nuclear meltdown on Mars.

“Melting fuel would be difficult if not impossible for the applications that we’re doing,” McClure says. “The way we’ve got the physics designed, the reactor will basically put out as much heat as is being asked of it. So if we lose cooling and are just radiating a little bit of heat energy away, the reactor will drop in power to match that.”

It’s also designed to operate in the odd environment of space. We think of space as cold, but keeping a reactor cool in a vacuum isn’t so easy. There’s no material like air or water flowing by that can transfer heat away from your generators. Instead, the system relies on eight heat pipes, each filled with about one tablespoon of sodium, which has a high boiling point.

The sodium boils at high heat, when it gets near the parts of the pipes closest to the fissioning uranium fuel. The vapor travels down the pipe and condenses, where the temperature difference helps generate electricity. Then, the cooled substance travels back to the warmer part of the pipe and the whole system starts again. It can theoretically produce reliable power for years, if not decades.

How safe is it?

Many people who hear nuclear and space worry that if something should go wrong on launch, the nuclear power source onboard could prove hazardous to those standing below.

“People always think you’re going to fly Chernobyl into space or something,” McClure says. The reality is far less dangerous. “Before you fission a reactor there are some minor amounts of radioactivity that exist in the core, because it is uranium, but its very small. If something were to happen in a launch accident, it’s really not going to present a problem to the public,” McClure says.

McClure explains that should something go wrong with a launch, the exploded remnants of uranium in the reactor’s standard, un-fissioned state would pose very little danger to the public. “You’re talking far less than a millirem for a peak dose. Most people would be in the microrem range,” McClure says. For comparison, the average American tends to receive about 620 millirems per year in radiation. “It’s far, far less that you would receive from background radiation, or taking an airplane flight.”

But launching the power source is only the first step. It must also operate safely in remote reaches of space. Once it’s turned on—long after it leaves Earth’s atmosphere—it will become more radioactive. But the team has designed it so that the reactor will shut down automatically if the power fails. And they plan to put it through its paces next month in Nevada, connecting it to two engines that will each produce about 80 watts of power to bring the fission reaction up to a heat of about 800 degrees Celsius.

“We’ll shut off all heat removal and show that the reactor will not only survive, but also stay in a standby mode, where if the power conversion system could come back to life and start drawing power again it will go right back to where it was. That will really demonstrate that we can handle any transient or off-normal operations of this reactor without any worries,” says Dave Poston, chief reactor designer at Los Alamos.

What will it do?

“The one kilowatt is for deep space missions, a mission to another planet like Pluto or one of the moons of Jupiter. The 10 KW version is either for deep space or the surface of Mars. Right now NASA’s current planning would call for sending five 10 kilowatt reactors to Mars,” McClure says.

That’s enough to provide the estimated 40 kilowatts of electricity needed to power a Martian base, plus one extra for good measure.

“Mars is a very difficult environment for power systems,” Steve Jurczyk, associate administrator of NASA’s Space Technology Mission Directorate, said at a press conference. “It gets less sunlight than Earth or the moon, it has very cold nighttime temperatures, and it has very interesting dust storms that can last weeks and months that engulf the entire planet.”

While NASA has explored solar panels as a potential source of power—and they definitely aren’t off the table—the agency is looking for something that could help power necessary life support systems consistently. Even when the sun is particularly faint.

The first reactors would land on Mars and begin powering autonomous systems to separate water ice into liquid oxygen and hydrogen, generating fuel for the return journey. Once humans arrived, the systems could power their habitats and other support systems. NASA is in talks with commercial groups as well, proposing that the Kilopower reactor might be valuable for their off-world exploration efforts.

“As a former astronaut I can assure you that having reliable power sources is critical when venturing away from low Earth orbit,” says Janet Kavandi, director of NASA’s Glenn Research Center. “And this type of power system will be especially important as we travel deeper into the solar system, and eventually to the surface of other worlds.”