A real breath of fresh air. 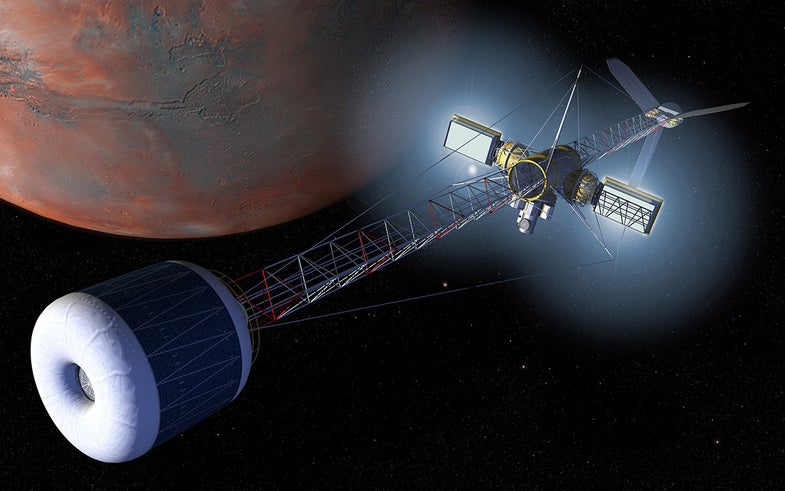 Space agencies and private companies already have advanced plans to send humans to Mars in the next few years—ultimately establishing settlements there. And with a growing number of discoveries of Earth-like planets around nearby stars, long-distance space travel has never seemed more exciting. However, it isn’t easy for humans to survive in space for sustained periods of time. One of the main challenges with long-distance space flight is transporting enough oxygen for astronauts to breathe and enough fuel to power complex electronics. Sadly, there’s only little oxygen available in space and the great distances make it hard to do quick refills. But now a new study, published in Nature Communications, shows that it is possible to produce hydrogen (for fuel) and oxygen (for life) from water alone using a semiconductor material and sunlight (or star light) in zero gravity—making sustained space travel a real possibility.

Using the unbounded resource of the sun to power our everyday life is one of the biggest challenges on Earth. As we are slowly moving away from oil towards renewable sources of energy, researchers are interested in the possibility of using hydrogen as fuel. The best way to do this would be by splitting water (H2O) into its constituents: hydrogen and oxygen. This is possible using a process known as electrolysis, which involves running a current through a water sample containing some soluble electrolyte. This breaks down the water into oxygen and hydrogen, which are released separately at the two electrodes.

While this method is technically possible, it has yet to become readily available on Earth as we need more hydrogen related infrastructure, such as hydrogen refilling stations, to scale it up.

Hydrogen and oxygen produced in this way from water could also be used as fuel on a spacecraft. Launching a rocket with water would in fact be a lot safer than launching it with additional rocket fuel and oxygen on board, which can be explosive. Once in space, special technology could split the water into hydrogen and oxygen which in turn could be used to sustain life or to power electronics via fuel cells.

There are two options for doing this. One involves electrolysis as we do on Earth, using electrolytes and solar cells to capture sunlight and convert this into a current.

The alternative is to use “photo catalysts,” which work by absorbing light particles—photons—into a semiconductor material inserted into the water. The energy of a photon gets absorbed by an electron in the material which then jumps, leaving behind a hole. The free electron can react with protons (which make up the atomic nucleus along with neutrons) in water to form hydrogen. Meanwhile, the hole can absorb electrons from water to form protons and oxygen.

The process can also be reversed. Hydrogen and oxygen can be brought together or “recombined” using a fuel cell returning the solar energy taken in by the “photocatalysis”—energy which can be used to power electronics. Recombination forms only water as a product—meaning the water can also be recycled. This is key to long-distance space travel.

The process using photo catalysts is the best option for space travel as the equipment weighs much less than the one needed for electrolysis. In theory, it should work easily. This is partly because the intensity of the sunlight is far higher without the Earth’s atmosphere absorbing large amounts on its way through to the surface.

In the new study, the researchers dropped the full experimental set up for photocatalysis down a 120m drop tower, creating an environment similar to microgravity. As objects accelerate towards Earth in free fall, the effect of gravity diminishes as forces exerted by gravity are cancelled out by equal and opposite forces due to the acceleration. This is opposite to the G forces experienced by astronauts and fighter pilots as they accelerate in their aircraft.

The researchers managed to show that it is indeed possible to split water in this environment. However, as water is split to create gas, bubbles form. Getting rid of bubbles from the the catalyst material once formed is important—bubbles hinder the process of creating gas. On Earth, gravity makes the bubbles automatically float to the surface (the water near the surface is denser than the bubbles, which makes them buoyant)—freeing the space on the catalyst for the next bubble to be produced.

In zero gravity this is not possible and the bubble will remain on or near the catalyst. However, the scientists adjusted the shape of nanoscale features in the catalyst by creating pyramid-shaped zones where the bubble could easily disengage from the tip and float off into the medium.

But one problem remains. In the absence of gravity, the bubbles will remain in the liquid—even though they have been forced away from the catalyst itself. Gravity allows for the gases to easily escape from the liquid, which is critical for using the pure hydrogen and oxygen. Without the presence of gravity, no gas bubbles float to the surface and separate from the mixture—instead all the gas remains to create a foam.

This reduces the efficiency of the process dramatically by blocking the catalysts or electrodes. Engineering solutions around this problem will be key to successfully implementing technology in space—with one possibility being using centrifugal forces from rotation of a spacecraft to separate the gases from the solution.

Nevertheless, thanks to this new study we are a step closer to long-duration human spaceflight.

Charles W. Dunnill is a Senior Lecturer in Energy at Swansea University. This article was originally featured on The Conversation.