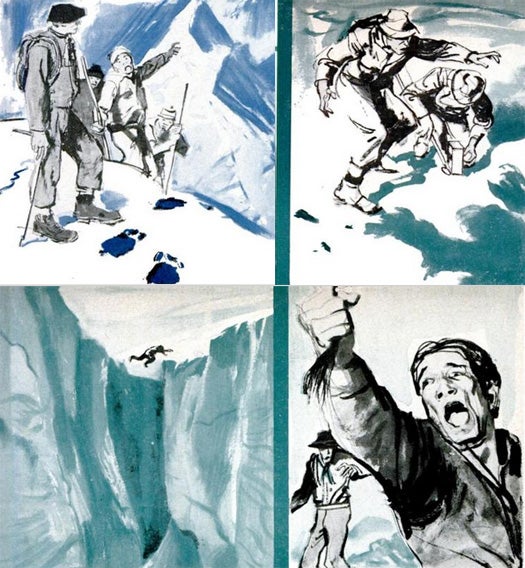 We don’t see a lot of cryptozoology – the study of animals that have not yet been proven to exist – in the pages of PopSci these days, but that’s what we have the archives for. Buried within the decades upon decades of “real” science, filled with “facts” and “research” are some gems of articles, where we chart the progress of believers searching for creatures we strongly suspect they may never find, but secretly hope they will.

In this week’s archive gallery, you’ll see blurry photographs of the Loch Ness monster, examine various contraptions used to look for or catch sea serpents, read an offer for a free dragon egg that seems almost too good to be true, learn how to make silver bullets and hear all about Sir Edmund Hillary’s expedition to find the Abominable Snowman (spoiler: his plan involves using compressed carbon dioxide to shoot a hypodermic needle at it).

In Victor Hugo’s book, The Toilers of the Sea, the hero Gilliatt is attacked by a giant octopus off the coast of the island of Jersey. And in 1922, some fishermen near the same island reported being attacked by an octopus which nearly capsized their boat before they fought it off in the battle gloriously depicted here. We posited that encounters such as this might account for the “200 apparently truthful accounts by mariners of the sighting of huge sea serpents.” We also wrote that the fishermen’s alleged encounter “is held to set at rest the scoffing comments of some naturalists concerning the plausibility of Victor Hugo’s celebrated story,” though we’re not certain quite how.

You’ll never catch a sea monster without a solid ship. Captain Nemo said that. Captain Nemo, or me, just now. The vessel on top is the not-at-all stupidly-named bathysphere, in which Dr. William Beebe set the world deep-sea diving record. He planned to remodel it and head back down for a better look at the “enormous, fantastic creatures he believes he has dimly glimpsed in previous descents.” Underneath is the submarine exploring tube that photographer J.E. Williamson was planning to use to sneak up on the Loch Ness monster and settle once and for all the debate surrounding its nature. Some thought it was a giant sea serpent, some thought it was a whale and Williamson believed it to be an enormous squid.

I guess they’re technically not cryptids if they aren’t mythical, but these hybrids sound like creatures from the bizarro version of our world. Up top we have a cattalo, a cow/buffalo mixture created by interbreeding, and below it is the tigon, a hybrid of a lion and a tiger, better known today as a liger, thanks to Napoleon Dynamite. To the far right is our approximation of what a human/chimpanzee hybrid would look like. We reported at the time that Russian scientists were seeking to create one, and believed that by doing so, they would find the “missing link” in our evolutionary history.

This intrepid professional diver is arming himself to go investigate rumors of a “weird aquatic monster” in Arkansas’s White River. He was lowered to the bottom of the river to scope out the scene and, presumably, smite the monster upon the rock with his eight-foot steel spear should he encounter it. However, the rumors were never validated.

In 1957, we published a comprehensive timeline of key events in the search for the Abominable Snowman, calling it “the most wanted quarry of any chase,” and remarking both at our inability to find it and its ability to find us. Here are some highlights from the 68-year-long search:

Dr. Anton F. Bruun, a marine biologist with the University of Copenhagen defended his belief in sea serpents to us. He recounted the time he found a six-foot long eel larva, but couldn’t locate its parents. With a baby that big, he figured mom and pop could’ve reached at least 72 feet in length, and that if sailors ever encountered an eel of that size, it would be reasonable for them to think they had seen the “Great Sea Serpent of the legends.” Ever-interested in How It Works, we also published a diagram of a pyramid-shaped trap that would be the most likely way to catch a sea serpent (pictured, on the bottom).

One of the most famous adventurers of all time, Sir Edmund Hillary, the first man to scale Mt. Everest (along with his Sherpa guide) shared with PopSci his plans to track the Abominable Snowman, possibly inspired by the despair of his near-miss seen two slides ago. We reported at the time that while people “frequently find big man-like footprints in the Himalayan snows, they rarely glimpse a Yeti, as the natives call the Snowman. When they do, they see little more than a wraithlike shadow.” Hillary is pictured here, with a sketch of the Snowman “made from the best evidence of its appearance.” The expedition was to last four to nine months and would involve, among other things:

The Royal Air Force photo-intelligence unit analyzed this photo taken on 16mm film by a wartime pilot turned aeronautical engineer in 1960, and concluded that something was indeed in the water, and it was probably alive. Tim Dinsdale tracked the progress of a reddish-brown lump as it moved through the loch 1300 yards away, taking pictures on 40 feet of film. The RAF deduced from the evidence that whatever it was, it was moving at 10 mph, that it was at least six feet wide and five feet high and that it was not any kind of watercraft, therefore “probably an animate object.” This whipped Nessie Truthers into a frenzy and led to speculation that the famous Loch Ness monster was either a plesiosaur, heretofore presumed to be extinct, or a giant sea slug.

Lucky subscribers of PopSci in 1969 had the unfathomable opportunity to receive a FREE* dragon egg. Do you think if I write to “Puff” The Magic Dragon today they’d still have some left? It makes a wonderful pet for children, they say. I’m going to name mine Norbert.

Our resident mad scientist Theodore Gray set about crafting his own silver bullets in 2005, presumably as insurance to carry when taking night walks under the full moon. He constructed a bit from a steel rod, used it to make a bullet mold out of graphite and then poured in pure liquid silver. While he never tried out his bullets in a gun, we suspect that werewolves will think twice before crossing his path.